The idea is to make a workout more motivating by using 360° VR content.

Add VR to Your exercise machine

Add VR to Your exercise machine

The idea is to make a workout more motivating by using 360° VR content. 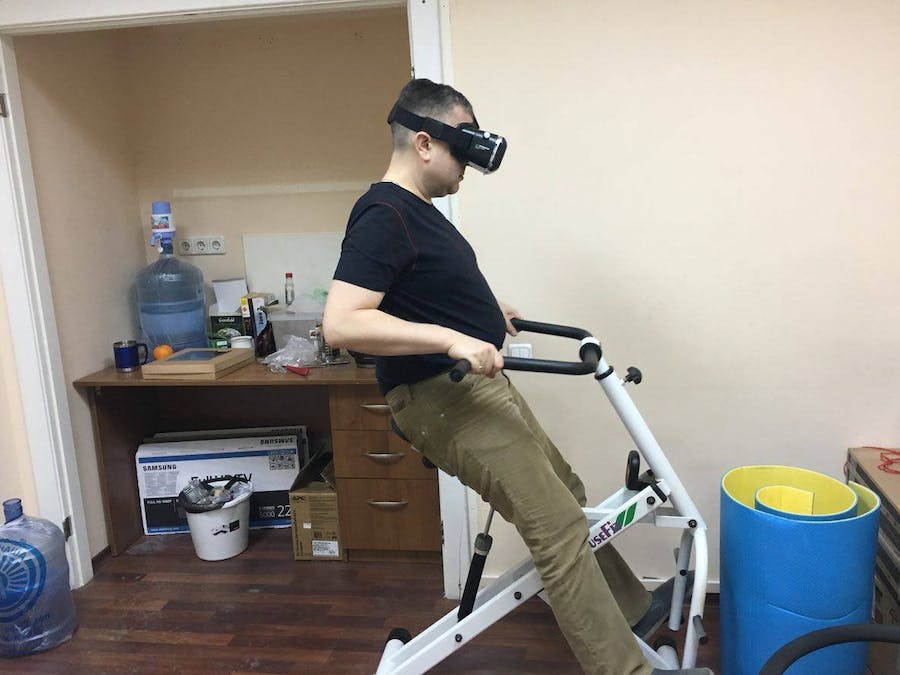 Probably no one will argue that physical education and regularity - the key to beauty and health. During my mostly sedentary work, it is necessary to take breaks directly, and during them, as it were, to move (and not at the playstation or beer). In order to not be tired of such a fitness, it is necessary to have a variety of games and a reward system specifically for this exercise machine. Then it will be quite an effective motivator for sports. Since the "excuses" do not engage - it's hot, cold, not today, feeling unwell, going to visit, just do not want to - there will be a million). Although someone will say that the main thing is the inner motivation that leads a person to perfection. I tried it, but if you watch TV and work on the exercise machine at the same time, it is much easier to go to perfection.

Main idea of this project is: device bundled with freeware, open source software allows you to watch virtual worlds while experiencing real feelings and real load. Workouts at home are really exciting and personal. You can look around as in reality, considering all 360, to be engaged at home as on the surrounding nature.

We will carry out destruction and experiments on living people using a rider system exercise machine. Its compact design loads the muscles of the body, and simultaneously trains the heart. Another name for the simulator, "rider", is given because of the similarity of movements on it with a horse ride. The principle of operation is similar to horse riding, but when working on a wiggle simulator, it is performed by working the muscles of the human body, and not by the movements of the animal.

If you do not have the same or compatible simulator at hand, which, you see, sometimes it happens, you can simply buy one or wait until you have laid out a guide on connecting to what you have.

“Use what is in your hand and do not look for something else for yourself.”

You can use any phone with VR headset or there are android compatible VR headset.

I have a few idle phones, and some of them seem to be nothing in VR, for example Lg G3, but with a small limitation - after debugging I have 6D rides (do not ask for 6D-- customers call them that, let them marketologist and they have this little weakness), Wi-Fi has fallen off, so we will not drive the streams over the network, and you will need to remember to upload video before training to your phone

This is the piece of hardware that you need to fasten with blue tape to the simulator.

It consists of a LuaNode32 module with an ESP32 purchased on OLX, and a 6DOF MPU-6050 module from there.

The principle of operation of our exercise machine is similar to horse riding, which is why it is called “rider”, but when working on a exercise machine, it is performed by working the muscles of the human body, and not by the movements of an animal (that's why it is a simulator).

So-- best on it will be viewed videos with horseback riding, from experience, go well and roller coasters.

How it works: while with difficulty. This is all in development.