As a parent you care about your child, even when they go to school. This project is an entry level system to keep tack of your child.

As a parent you care about your child, even when they go to school. This project is an entry level system to keep tack of your child. 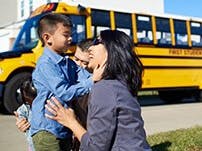 This project idea came about because of news articles about bus companies and child safety. Every so often a news story comes out about a child being left on a bus or a child dropped off at a wrong location. I wanted to design an entry level system that a bus company could use to track the children. It comes with the side benefit of knowing where the bus was when the child was left off.

Here are a couple of the stories that made me say we can do better.

It seems to me that the school bus is a good control device. It has only one entry and exit point. Why not put sensors in the bus that can track the direction of the people going on, accept RFID tags and cards. My idea is using a Sharp Proximity sensor, detect when a person is close enough to the door and passing through the obstacle sensor, keep a count of those going in and coming out.

For the bus company, the drivers can have RFID tags assigned to them. so when then enter the bus, their tag is sent into the system. The bus can also have a tag associated with the keys. This tag also would be recorded when the driver enters the bus.

Concerned parents can give their children one or more tags that can be read. The RFID reader used in this project is only read within 1-2cm, but enhancing the RFID reader could allow the child to pass by without waving the tag in front of the reader.

The bus driver Opens the door of the bus, and turns on the switch to the power supply to the system. The system needs to be seperate from the switch supply, so to detect going on and coming off the bus. As the driver passes the RFID antenna, he swipes the bus tag and then the driver tag. At this point, he can enter the bus and start it. While the bus starts the system sends the powerup time, bus location, the bus and driver tags. Once the bus is prepped, the driver can take the route.

At periodic intervals, the bus id , time and GPS location is sent to the online system. Other parameters can be sent as well.

When the bus comes to a stop, he opens the door for the children. As the children enter the bus, the obstacle sensors add to the count. If th child has an RFID tag, he scans it and enters the bus. When the child leaves the bus, he can scan the RFID tag, to show that he exited the bus. The obstacle sensors decrement a count as he leaves. So when the bus is empty the count should only be 1 for the driver. When the driver leaves, the count should be zero. At this point he should power off the system.

I would like to get the system to where there is a bus company portal, a driver portal, and a parent portal, to view who the driver is and how many kids were on the bus, and when and where the children have entered and exited the bus.