This project can detect gas leaks, fire and smoke and when powered by a nine volt adapter can act as a gas leak detector for kitchens.

This project can detect gas leaks, fire and smoke and when powered by a nine volt adapter can act as a gas leak detector for kitchens. 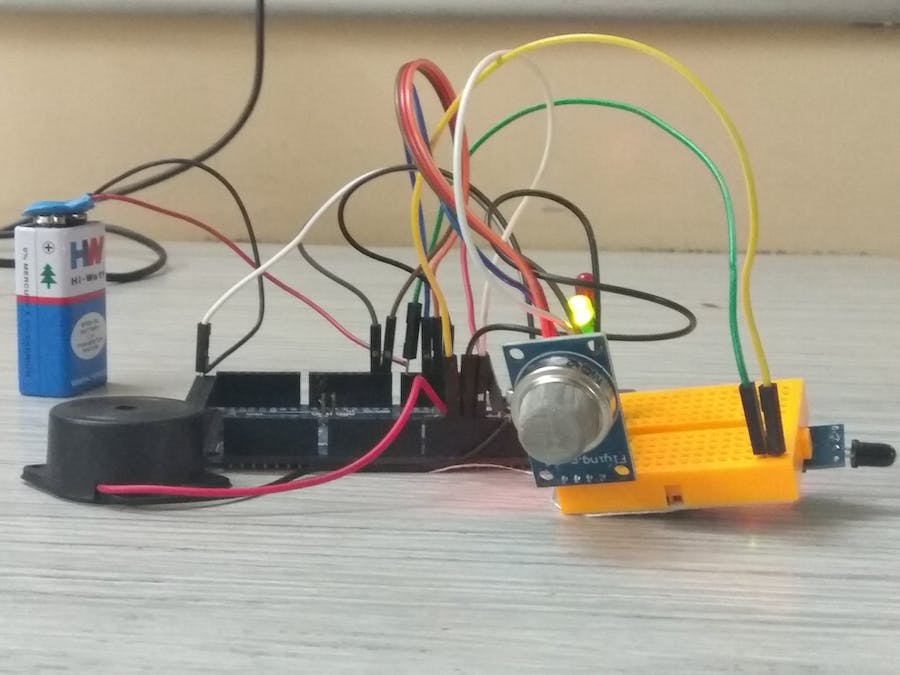 This project can be used to detect gas leaks and also detect fire in the kitchen or any other place in your house.

The incident behind making this was that once in the afternoon I was making coffee and after I hade made it I forgot to switch off the gas regulators. As a result gas was continuously flowing out and the entire kitchen along with its adjacent rooms was smelling. When this smell hit my aunt's nose she ran to the kitchen and turned off the gas. I recieved a good scolding that day and this urged me to make this project.

This project uses an mq 2 sensor , a flame sensor ,2 leds and a buzzer .And of course the brain which is the arduino.

What is an MQ-2 Smoke Sensor?

The MQ-2 smoke sensor is sensitive to smoke and to the following flammable gases:

The resistance of the sensor is different depending on the type of the gas.

The smoke sensor has a built-in potentiometer that allows you to adjust the sensor sensitivity according to how accurate you want to detect gas.

What is a flame sensor ?

A flame detector is a sensor designed to detect and respond to the presence of a flame or fire, allowing flame detection. A flame detectorcan often respond faster and more accurately than a smoke or heat detectordue to the mechanisms it uses to detect the flame.

Infrared flame detectors– These sensors operate by using an infraredband. A small thermal imaging camera in these detectors can instantly detect the presence of hot gasses released anywhere near the infrared detector. Infrared waves can penetrate dust, smoke, fuel particles and oil films.

How does my project work?

In this project the MQ2 and flame sensor simultaneously collect data from the environment and then transfer it to the arduino board in the form of analog inputs.

The arduino board then checks if the values submitted by the sensors is less or more than that of the value kept constant in the memory.

If the value is higher or lower than the threshold value the arduino acts respectively.

ENOUGH of reading, Lets get to wiring and firing!