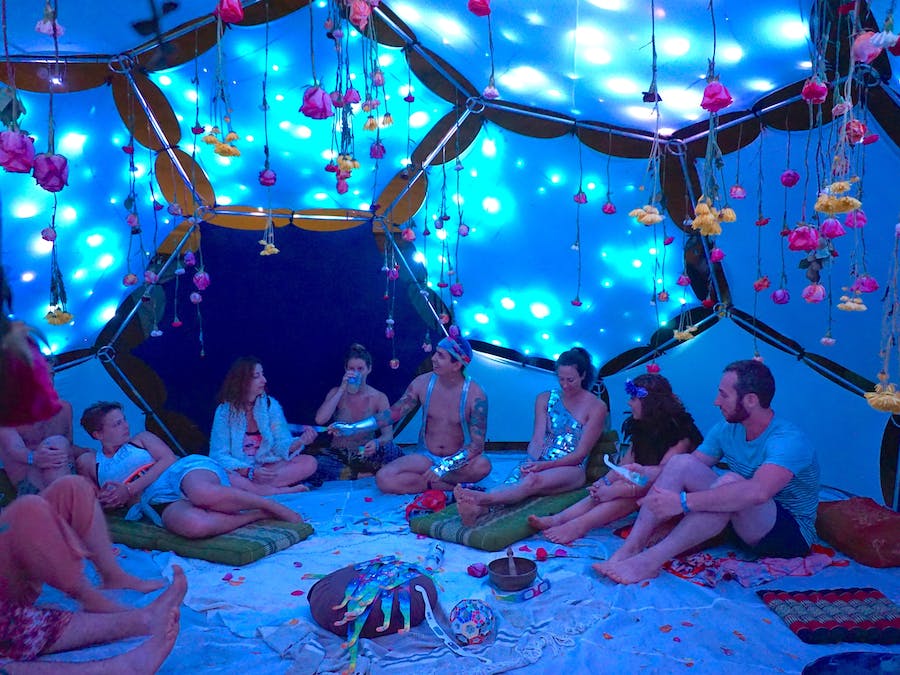 We covered an archimedes dome in LEDs for the Gratitude: Migration festival.

The previous version was hand-soldered and featured 570 WS2811b LEDs driven by two Fadecandies. These lights were spiral-wrapped around six hexagons and four pentagons. A mac laptop running python generated the lighting data, modeled after stars forming and dying.

The result was a very calming space that greatly encouraged us into doing art more frequently.

Because the strips were hand-soldered with no protective housing they weren't waterproof and the connections easily shorted out (due to water or flexing). As a result, four panels are broken or intermittent. Although we could fix it we'd rather invest our time in something that can take much more abuse, since this will eventually go to Burning Man.

The new version will be powered by ~5000 WS2811 LEDs and two PixelPushers! These LEDs are IP68 waterproof and wired in a way that a failure is isolated to a ring and not a whole panel of lights. We'll also be able to use LED Labs to control it better, with lighting effects synchronized to music.

In reality though we don't ever run all the lights at peak brightness – only about 50-80% – and most of them aren't on at the same time. So 750W is probably enough peak draw. This means we probably won't blow the circuit if its shared with other things (except things like hair dryers and microwaves)

Because we want to handle failures without rebuilding our PSU, we should have at least three power supplies, and two of them should handle theoretical peak load. You should never run a PSU at 100% output; 80% or less is better (and apparently don't run it at 0% either – 50% output minimum is healthy.)

Lastly, we're gonna take this thing all over the world! So let's make sure it can handle lots of different kinds of AC power and cleanly output 5VDC.

So we need three 900W power supplies, each one taking in 110-250VAC and outputting 150A (!!!) of 5VDC. Two should handle the entire 1500W theoretical peak load with room to spare, and when one eventually dies we have a third ready to take its place.

The WS2801s are the pencil- or bullet-type housings and are IP68 rated (can run underwater). They come in strands of 50 and are spaced 65-80mm apart. Because I want the pixels to line up hexagonally, I look at the largest span that can fit on the edge and use some math to figure out the total number of pixels.

In my case this was 13 hexagons. So the total number of pixels for a hexagonal panel is 3n(n+1)+1 or 547 pixels. Because that's more that 480 and pixelpusher can support up to 480 pixels per channel, we have to make our hexagons smaller by one unit