Simpler than Basic, easier than the Theremino Script, despite being: “the simplest programming language in the known universe."

Simpler than Basic, easier than the Theremino Script, despite being: “the simplest programming language in the known universe." 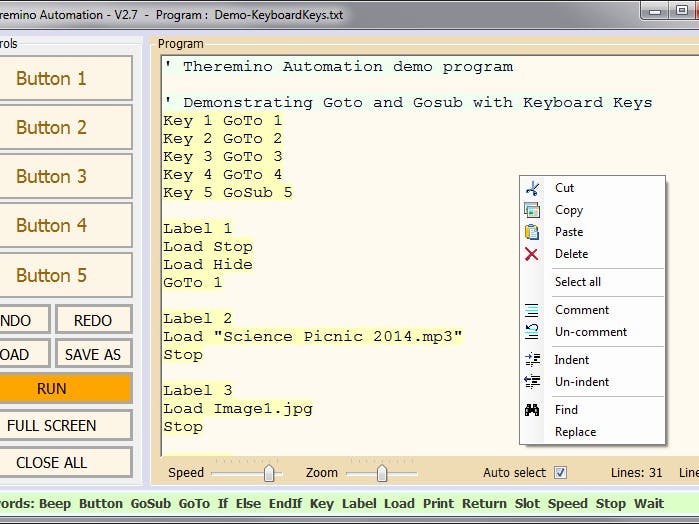 Simpler than Basic and easier than Theremino Script; despite being: “the simplest programming language in the known universe,“ it's also incredibly powerful. With two or three words, you get results that otherwise would require pages of code.

The version 2.7 also allows you to bind keys, for example, you can open a website with a keyboard or launch a video with another. We recommend that you download it.

Being able to read and write the slots, you can turn on LEDs, move servo motors, and adjust temperatures and levels. But you can also control other applications. For example, you can tell Theremino ARM which GCode to run. And then wait until the robotic arm has completed its action before you perform the next operation.

This is not the real Basic, but only contains functions for automation applications. It doesn't work anyway, otherwise it would only use a draft of the Visual Basic. Those who want a more powerful language, can use Theremino Script, VBNET or CSharp.

Theremino Automation is being tested in a complex automation application. A whole production line in miniature rapistan motors, sensors and robot arm driven with GCode. This is an application that would have undermined a PLC with Ladder. Theremino Automation has become easy to program and use. Everything is controlled by a Windows tablet with the large buttons on the touch screen.

Why a new language?

There are dozens of programming languages, one more beautiful than the other. They are fast, powerful and flexible. It seems absurd to have to write a new one. But unfortunately all languages (VBNET, CSharp, VB6, C++, Java, Phyton etc.) require complex techniques and little intuitive even for the simplest operations.

Users expect, at a minimum, that you can run an education and be able to specify a wait time, for example 30 seconds, before you perform the next instruction. When they try to write it, the user interface freezes for 30 seconds, the buttons stop responding and the program becomes unusable. We tried to explain that you must use the Thread, the “Event programming” and the “State machines", but we realized that there are overly complex techniques, comprehensible only to those who program for years.

Theremino Automation fills this gap. The basic operations (do something and when this happens something else, wait a number of seconds, play a song, view a video, open a web site, etc.) are easy and intuitive.

This application is the first step, the evolutionary link, among the bimbominkia and the Maker. From now the Theremino system is at the forefront in the fight against bimbominkismo!

Early versions were developed to control a model of production line with robot miniature painters. Initially, it was thought to use a language ladder, but unfortunately, as soon as the project got complicated, the ladder became a jumble of incomprehensible lines. Then we tried Theremino Script, but the technicians workshop that produces the robot, not being programmers, found it difficult to build the structure of Events and Thread necessary to separate the user interface, the actual automation. Finally the Theremino Automation has allowed, not only to control the robot easily, but also to control the application RobotArm, change the GCode, check about 20 sensors, servo controls, relays and search engines constantly. All this was written in fifteen days by non-programmers.

A Windows tablet checks out a whole production line in miniature rapistan motors, sensors and robotic arm with four buttons on the touch screen. In these last days, workshop technicians who produce the robot painter are completing their application with design of animated templates (thanks to new functions that allow you to upload pictures and videos).

In this video you see a professional application of Theremino Automation and the hardware in your Theremino system. Many thanks, Chris, for giving us an example so significant and well designed. Wiring the master modules and drivers is perfect. A very good example for those who must build similar devices.

In this second video you see a test of two robotic arms, working in a coordinated manner, led by a simple program written with Theremino Automation.

For more information read the notes below to YouTube videos.

The robotic arms that you see in these videos are built with a 3D printer, according to the project Zortrax. Don't follow that plan because it requires an infinite amount of time and the results are not satisfactory. We are preparing a chance to build something in DIY, but using toothed belts and plastic gears instead of the inaccurate Zortrax project.

Version 2.5: the language has changed slightly, but it was worth it. The instructions are simpler and more powerful. Simply log on slots with Slot(n). You can write mathematical formulas, load Web pages, change speed when running and various other operations that were previously impossible. Finally, very useful, the programs are automatically saved. This version also contains the instruction file, in Italian and English. Version 2.6 : Fixed some bugs that caused the closure of the entire application. Version 2.7 : Added the ability to perform GoTo and GoSub in combination with the arrow keys (the PC keyboard, virtual or on tablets). Fixed a bug that caused the return from GoSub to the next line. Version 2.8 : Deleted the flashing, caused by the Load of images. Added the ability to view videos by type “.mov”. Sometimes the “.mov” have the extension “.Qt” (that is for QuickTime), in this case you must change, their extension in “.mov”. If a file opens with Windows Media Player, then it can also work with Theremino Automation. If necessary, change its extension in “.AVI”. Version 2.9 : Now the “Label” work even if they have a comment right. Version 3.0 : Great improvements. Now the variables are strings and numbers. Many flaws have been fixed. There is also an example to control Relay Switcher. Version 3.1 : By disabling the back button “SHOW COLORS” You can also work with huge files. We never thought that someone would write programs from 2000 lines, but it happened and become too slow. The solution to disable the colors is a bit’ crude but effective. The alternative would be a complicated system to color only the visible rows. For very large programs, We recommend that you do not use Theremino Automation nor Theremino Script, but the real VisualStudio 2008 Express. Version 3.2 : Color management is a bit’ improved. Anyway, for very large programs, We recommend that you do not use Theremino Automation nor Theremino Script, but the real VisualStudio 2008 Express. From this version onwards you can also hide the buttons text writing as a null string (“”) Another improvement is that the pause time “Wait” can also come from a slot or a formula. Version 3.3 : Fixed a bug that occurred when writing Load followed by a double quote. Delete the flashes to the ignition. Version 3.4 : Improved the visibility of controls in the status line below. The status line now consists of two lines, which allow you to add new commands. Added two new commands “SaveSlots” and “LoadSlots”, that save and load the values of all slots, in the file “Slots.txt”.

Get the system modules

The Theremino team only deals with research and does not sell hardware. The system is completely "Freeware", "Open Source", "Not for Profit" and "DIY", but there are manufacturers who can provide modules assembled and tested at a great price. One could hardly self-build them spending less. A list of manufacturers on this page: www.theremino.com/contacts/producers

The source code of our software does not contain copyright notices, author names and links to our site, so you can make every use, without limitation of any kind. We do not require you to specify the original source or our site but if you are happy with our software remember us and make known this site to your friends. Any donations, even small, are very welcome and can help us to maintain the software “free” and to produce always new applications.

ENGLISH – HARDWARE: THE PRODUCT Theremino System IS PROVIDED TO YOU “AS IT IS”, AND WE MAKE NO EXPRESS OR IMPLIED WARRANTIES WHATSOEVER WITH RESPECT TO ITS FUNCTIONALITY, OPERABILITY, OR USE, INCLUDING, WITHOUT LIMITATION, ANY IMPLIED WARRANTIES OF MERCHANTABILITY, FITNESS FOR A PARTICULAR PURPOSE, OR INFRINGEMENT. WE EXPRESSLY DISCLAIM ANY LIABILITY WHATSOEVER FOR ANY DIRECT, INDIRECT, CONSEQUENTIAL, INCIDENTAL OR SPECIAL DAMAGES, INCLUDING, WITHOUT LIMITATION, LOST REVENUES, LOST PROFITS, LOSSES RESULTING FROM BUSINESS INTERRUPTION OR LOSS OF DATA, REGARDLESS OF THE FORM OF ACTION OR LEGAL THEORY UNDER WHICH THE LIABILITY MAY BE ASSERTED, EVEN IF NOT ADVISED OF THE POSSIBILITY OR LIKELIHOOD OF SUCH DAMAGES.

ENGLISH – SOFTWARE: THE Theremino System SOFTWARE IS FREE SOFTWARE: YOU CAN REDISTRIBUTE IT AND/OR MODIFY IT UNDER THE TERMS OF THE “GNU General Public License” AS PUBLISHED BY THE “Free Software Foundation”, EITHER VERSION 3 OF THE LICENSE, OR ANY LATER VERSION. YOU CAN GET A COPY OF THE “GNU General Public License” FROM: http://www.gnu.org/licenses 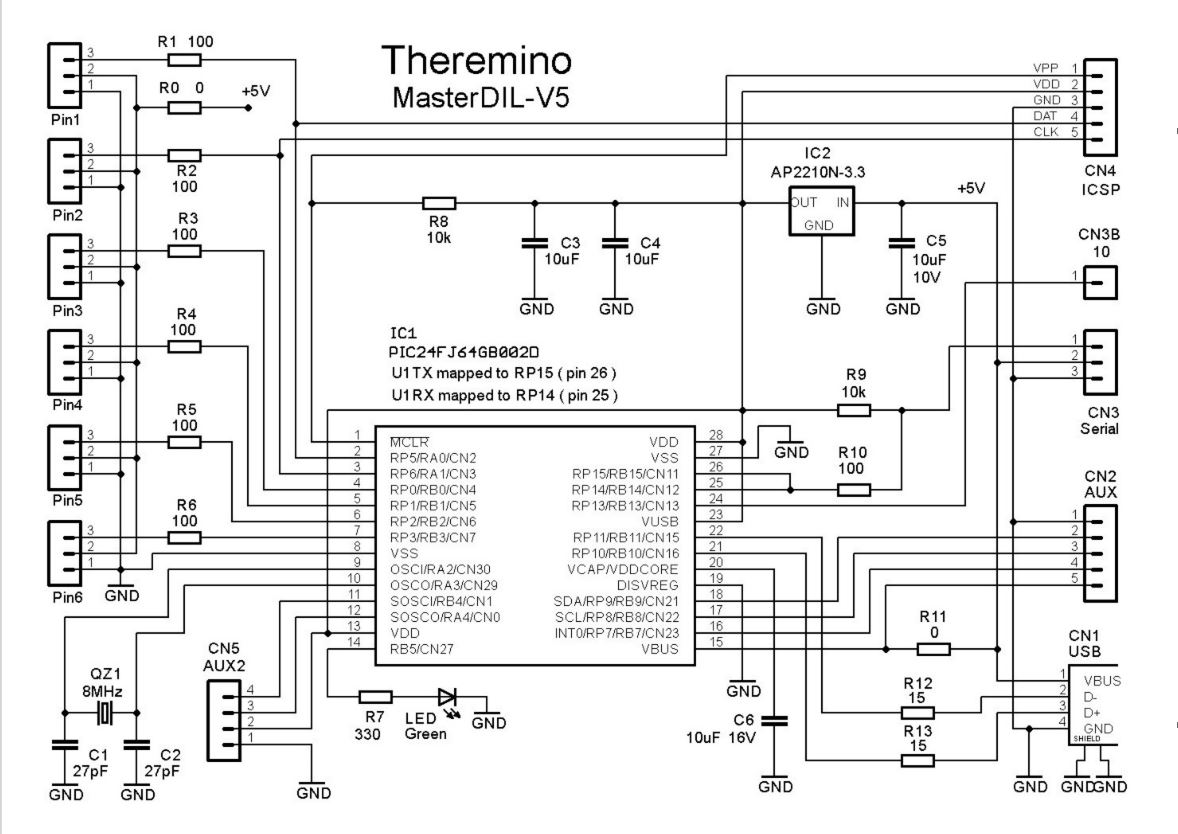