Learn how to make a light tracker of your own that always points in the direction of the light falling on it.

Learn how to make a light tracker of your own that always points in the direction of the light falling on it. 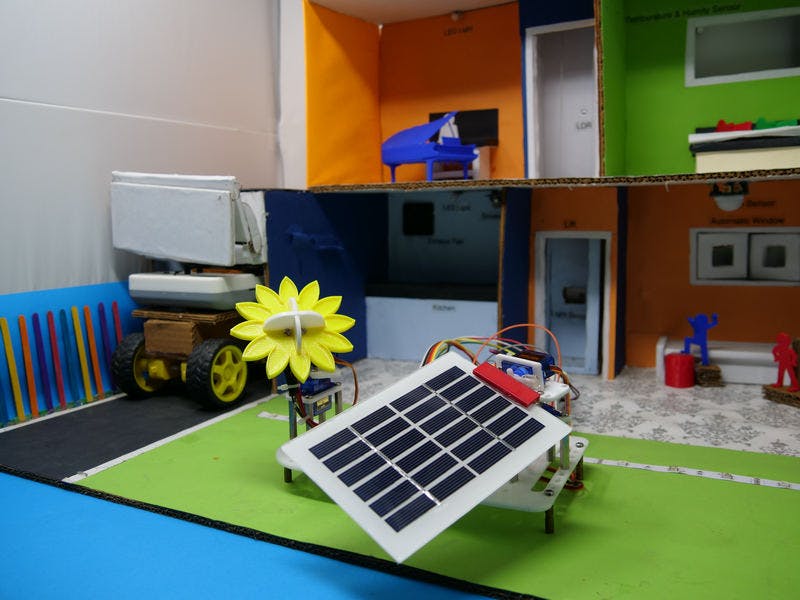 In this project, we will be building a light tracker using light dependent resistors to detect the direction of incoming light from the torch of your Smartphone and two servo motors to align in that direction.

You can also buy the evive Starter Kit, as there is the number of projects from it. As there are lots of projects listed on tutorials which are made with the help of it.

You can cut the pieces out of cardboard.

Step 2: Making of the Base

Our light tracker requires two servos, one for rotation about each axis. This is one of the two. Also, to produce combined rotation, both the motors should be connected. Insert the second motor in the servo motor holder. The same assembly shall carry the micro horn which fits into the first motor. Fasten the horn to the servo motor holder using self-threading M2 screws, as shown in the corresponding image.

We have assembled the individual motors. Now, we will assemble our 4 LDR sensors which will detect incoming light from the four directions.

Make a sunflower-shaped cutout using a hard paper as shown and paint it with your favorite color. You need to make a + shaped cut at the center and four small holes in each section of the cutout. Then place it on the top of the light tracker plate assembly by matching the slots.

Here, we have 3D printed the shape.

Want to make more 3D printed stuff? Now, whatever you design can come to life. Own a 3D printer now!

Insert LDRs (light dependent resistors) into the holes made.

There is a free horn on our sunflower like assembly. We will lock our second servo motor to the horn through the screw provided with servo accessories. Using evive controls menu, set the servo angle to about 90°

There is a free horn at the bottom of this assembly which we will connect to the remaining servo. Now you can see how each servo’s individual rotation will provide an all-around rotation of the sunflower-like structure on top hence ensuring that it is able to detect the light falling on different sections.

Here, the most popular use of the Sun Tracker is when we attach Solar Panel. In Solar Panel, if the Photoresistors are, then the solar panel will then check which part of it is receiving more light. Thus, adjusting the position accordingly. Which results in increased efficiency.

We have then placed this Sun Tracker in our home.

Connect the LDRs and 10 kOhm resistors directly to the breadboard. Make the remaining connections using jumperwires. Refer to the circuit diagram for ensuring proper connections.

From the assembly, you can observe that the four LDRs are separated by the wall. Each LDR will detect light falling on its section. We will number each LDR for reference. If both the servos are at the 90-degree position, then the sunflower will be facing upward. The top left LDR will be named LDR1. Similarly, we will name LDR2 (top-right), LDR3 (bottom-left) and LDR3 (bottom-right).

If the lower region has higher value, then we will move the sunflower backward incrementally.

To decide the direction in which the servos should move, we will consider the total amount of light received on a region, i.e. the sum of readings at LDR analog pins.

The code is written in two halves, one for each motor.

Initially, both are set at an angular position of 90 degrees as shown in the main script. CalibrateVerticalServo and CalibrateHorizontalServo are two blocks defined to track light.

Create variables LDR1_Value, LDR2_ Value, LDR3_Value and LDR4_Value to store the analog value of the LDR connected to analog pin A0, A1, A2, and A3 respectively.

Also, create variables Average1 and Average2 to store the average LDR value of the upper region and lower region.

We only check the magnitude of difference in the variables using the abs block.

The physical angle will only change when we use the set servo pin angle block to set the angle equal to the variable HorizontalServo.

With this, your very own solar tracker is ready! Now watch as it follows you and your Smartphone’s light wherever you go! 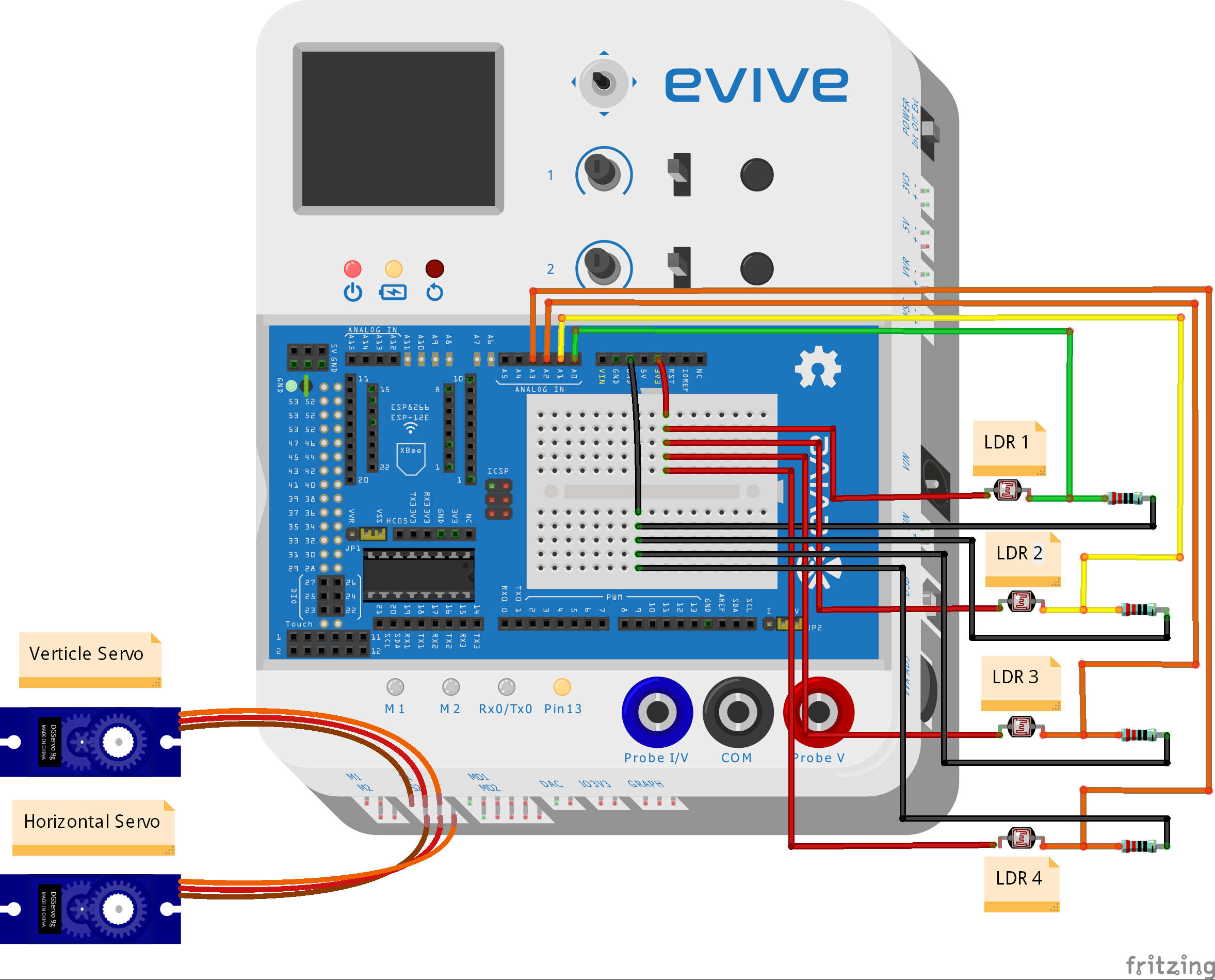