In this project, you will learn how to build a soccer-playing mobile robot, which will be controlled using a smartphone app.

In this project, you will learn how to build a soccer-playing mobile robot, which will be controlled using a smartphone app. 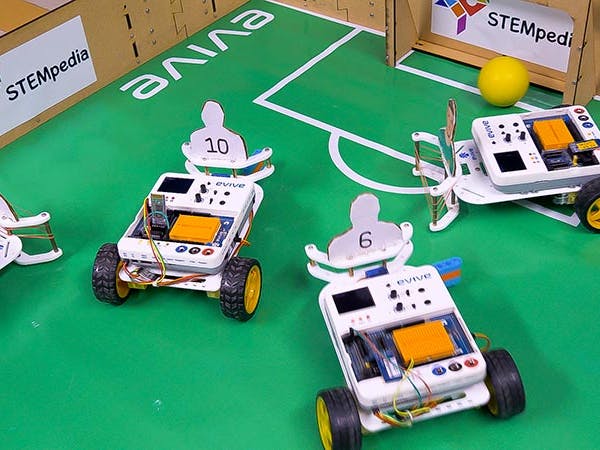 In this project, we are going to build DIY soccer playing robots which will be controlled using Smartphone Gamepad App. It feels like you are playing on a PlayStation using the app, but you are controlling robots and scoring the goals.

We have made 4 robots:

The Arena is similar to a football ground. In this match, we have two robots from each team. Team scoring the most number of goals will win.

All the components listed in the Hardware section can be found in the evive Starter Kit.

You can buy an evive Starter kit and make many more projects and robots like this.

Just like real cars, a robotic car also has wheels which are actuated using motors. For a moving object to be stable, you need at least 3 contact points with the surface on which it is moving. For e.g. in a car, you have four wheels, but on a bicycle, there are only two wheels. A cyclist can control the bicycle only when he is cycling, but if he stops he can’t balance the cycle without resting one of his foot on the ground.

In our mobile robot, we will have 2 wheels and one caster wheel touching the ground. A caster wheel has a small round sphere, which rolls on the ground. It is passive and can move in any direction.

A differential wheeled robot is a mobile robot whose movement is based on two separately driven wheels placed on either side of the robot body. Thus, it can change its direction by varying the relative speed of its wheels and hence does not require an additional steering motion.If both the wheels are driven in the same direction and speed, the robot will go in a straight line. If both wheels are rotated with equal speeds in opposite directions with respect to each other, the robot will rotate. Otherwise, depending on the speed of rotation and its direction, the center of rotation may fall anywhere on the line defined by the two contact points of the tires. While the robot is traveling in a straight line, the center of rotation is an infinite distance from the robot.

Our robot has a configuration similar to that of a three-wheeled differential drive robot.

Chassis is the base frame of any robot, on which driving motors and caster wheels are mounted.

The annotated base is shown on right. This is the bottom side. There is evive logo on the top side for your reference. So be careful while using the base.

NOTE: The motor wires should be inside, otherwise, they will collide with the wheel. Also, while assembling the robot, be careful about the holes you are using. Also, fasten all the nuts and bolts tightly for smooth functionality.

NOTE: Keep in mind, that what we have assembled so far (motors and castor) will be pointing downwards.

NOTE: Your basic mobile robot is now ready. This is the framework for almost every robot that we’ll work with. Modify it according to your need to use it as a line following, obstacle avoiding, light-tracking robot etc.

You can also make a striker by simply changing a part of the assembly.

Step 14: Circuitry of the Robot

Also, the circuit of the Striker Robot is given.

NOTE: Bluetooth module’s RX pin will go to TX3V3 pin on evive and others correspondingly. Note that on powering evive, a red LED will start blinking on the module. If you do not connect the module correctly, it may get damaged.

In this case, we are communicating wirelessly. The user gives instructions by pressing the buttons on the gamepad in the evive app. The robot takes actions according to the button pressed. For example, if Down is pressed the robot will move backward; if none of the buttons are pressed, the robot will stop. Below is the complete flowchart:

You can download the Game Pad from the link given below:

NOTE: You can add extra batteries to speed up your robot.

At times, your robot will refuse to behave the way you are commanding it to. Let’s fix this. If upon pressing forward, your robot starts moving backward or starts turning, that means at least one motor is rotating in the wrong direction. You can fix this by reversing the direction of that motor.

Your robots are ready. Now set up the arena and play the match. 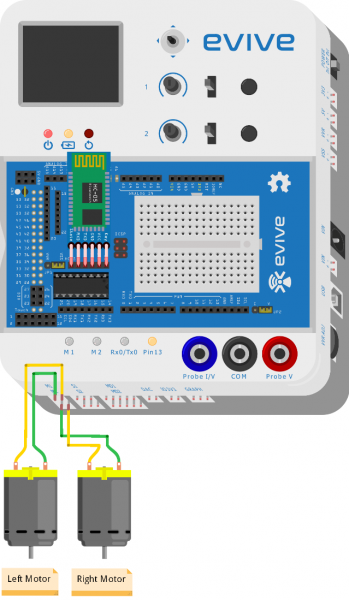