This project will show you how to print a 3D house using a 3D Doodler.

This project will show you how to print a 3D house using a 3D Doodler. 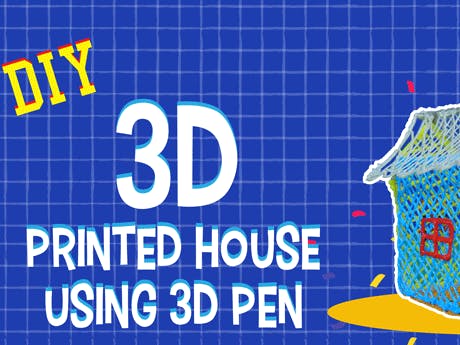 Harry Potter has a wand, Doctor Strange has the Cloak of Levitation, and Thor has the Storm Breaker. You may not have any of these, but you sure can have a 3D Doodler, a magical 3D printing pen that can give a 3D form to your imaginations!

And this is what this project is all about. You'll learn how a 3D printing pen works and print a 3D house of your own using it! Get ready for some 3D printing fun as we begin in 3...2...1...Go!

A 3D Doodler or 3D Printing Pen is the handheld 3D Printer. Unlike the heavy 3D printer it is similar to the normal pen which we use, with a little more features added to it. It helps you draw whatever you wish to create. The greatest advantage of 3D Pen is that to create a 3D object no software to design is needed, and no gcode is required. All you can do is make a design with a pencil on paper and follow the lines. Here, your hand is the one to guide it.

Similar to the 3D printer, it heats the filament and draws that out from the nozzle to create designs. Thus, with this, you can give it any shape you want and even doodle in the air. As soon as the filament comes out of the Nozzle, the filament starts to cool down and gets settle. Continuing this process will make your design ready.

Let's know what comes in this little box of happiness. It's packed with:

The pen looks pretty simple. But comes with a lot of features. All the buttons on the pen hold importance.

It is a simple process.

Make sure that speed is MAX while loading because if it is slow, the filament is inserted at a very slow speed. You can then change the speed once you start drawing using the Speed Controller.

Make sure that the filament head should be in the correct position.

The steps are similar to that of loading the filament.

Now the filament will start coming out of the pen automatically.

Step 8: Making of the Structure:

We have made a 3D design but using many 2D designs. 2D designs which you can touch and use wherever you want such as decor, apparel, objects, etc.

You can choose any design you want or maybe take a printout of the 2D design which will gradually make your 3D object. Many stencils to draw on are available on the internet. Or can also make your own design on paper. Today, we will be making a house whole layout we have made on paper.

Step 9: Making of Each Part of House:

Once all the components are done, take out the 2D piece from the paper.

Once you have all the components detached from the paper. We have to join them using the same 3D pen.

Thus, our final assembly is complete.

You can even try to make a freehand 3D object directly.

With this, your 3D-printed house is ready! Go ahead and have fun giving form to many more such creations using the amazing 3D Doodler!