In this tutorial I'll show you how to get started with shell access, configuration, and general linux operation on the ARTIK 10 Alpha build.

Getting Started with ARTIK 10 - Alpha Build

Getting Started with ARTIK 10 - Alpha Build

In this tutorial I'll show you how to get started with shell access, configuration, and general linux operation on the ARTIK 10 Alpha build. 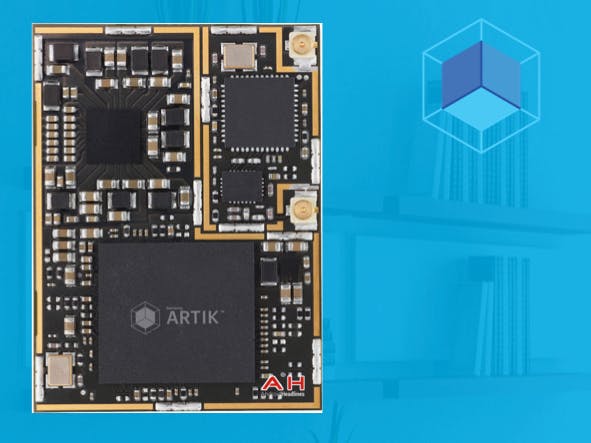 Let's Get Started: The ARTIK 10 Alpha

Samsung is making a big effort into entering the Internet-Of-Things melee. ARTIK appears to be a true platform (hardware and software) with local connection services, coordination, security, and connectivity that will also connect with their own services (Samsung SAMIIO, or SAMI) in the cloud.

What are SAMI cloud services? SAMI is an open-API data exchange ‘platform’ that will allow devices and sensors to easily push data to the cloud. Once there, the data can easily be digested by mainstream mobile devices and other standard web applications. SAMI has a handful of APIs currently available. Soon it may offer the ability to control and access data associated with Leviton switches, Kwikset Deadbolts, Philips lightbulbs, and many more.

The real issue with providing your data to the cloud (or even a local device) is securing it. Even if the cloud provider’s service is hacked, the data should be encrypted and independently secured, and only accessible to your devices with your private keys.

The ARTIK 10 processing module measures 29x39mm and boasts an ARM Octa-core processor capable of powering a smartphone or media hub. It sports a 1.3 Ghz processor, 2GB of ram, and 16GB of eMMC flash memory.

The preliminary development board that the ARTIK module sits on is considerably larger to include the interface electronics for network, USB, and radio links (Z-wave, NFC, WiFi, Bluetooth, ZigBee, SIGFOX).

These communication links are ideal for integrating all of the various wireless devices and securing their data locally. In addition, ARTIK can work as a gateway for getting this secured data into the cloud for easy access from other devices. Built into ARTIK is a ‘trusted execution environment’ (TEE) that ensures sensitive data is stored, processed, and protected in an isolated environment. It can offer isolated safe execution of ‘trusted applications’ and can enforce (a) protected execution of authenticated code, (b) system integrity, (c) and data access rights. This type of environment is readily, necessarily, and often leveraged by encrypted digital content, e-commerce (payments), and enterprise data.

Going Deeper: Linux on the ARTIK Board

Bringing the development board up and logging on:

Step 1: Connect the debug board to the development board using the debug cable.

After flipping both boards over, the blue tab on the cable should be facing down.

Step 2: Connect the antenna onto the wi-fi+BT connector.

If all of the connectors are pointed at you, the wi-fi+BT connector will be the second from the left.

Step 3: Connect the USB-to-Serial (DB9 connector) adaptor to the debug board.

When you plug the USB cable of the adapter into your PC, the port should automatically be detected and the drivers loaded. In windows, the device shows up as a “Prolific USB-to-Serial Comm Port."

Step 4: Identify the Comm Port and connect with PuTTy.

Through the device manager, identify the comm port. Using that information, you can connect to the device using a terminal program such as PuTTy. In the example below, the port number is “24”.

Once the comm port is identified, PuTTY can connect to it using a serial speed of 115200:

Step 5: Connect a network cable into the jack to give ARTIK network access.

Step 6: Power on the board.

Insert the power cable *and* then press the power button (the power button is the small black push button right next to the power connector). If everything is connected properly and PuTTY properly configured, you should see a linux console window actively booting Linux.

Step 7: Login to the board

At the end of the linux boot, the console window will provide you with a login prompt. The following default credentials should allow you to logon:

Shortly after receiving the initial prototype hardware, I receive a firmware update in the form of an “.img” disk image file (“artik10_sd_fuse.img”).

Using the Win32DiskImager utility available on Sourceforge, I created a bootable SD card image for the ARTIK.

Normally, the 2 boot mode switches are set to “off." Before turning on the board set Switch ‘2’ to the ‘on’ position to allow the automatic firmware update. Once power is applied, the board should boot and automatically start updating itself. You can see the update happen in real time and watch its progress using the serial console window. After the update is complete, power down the ARTIK, remove the SD card and set both switches back to the “off” position.

With the SD card removed and the switch set back to their normal position, power the board back up and verify that it boots correctly.

One relevant thing I noted during the upgrade process was that the linux distribution is related to the ‘Yocto’ project.

This fact, in combination with knowledge that it is based on Fedora 20 (‘/etc/os-release’), is extraordinarily helpful when doing Google searches on how to configure something.

Adding a new linux user to develop with:

Consistent with best practices, it is usually best to work on a system with your own identity, as opposed to relying on the default ‘root’ user.

Initially, logged in as ‘root’, use the following commands to create a new user:

To provide this new user with sufficient privileges to do system configuration, allow the user to have ‘sudo’ access. This is done using the utility “visudo” that pops up a ‘vi’ editor. In the file that is being edited, add the line:

This will allow the user to have sudo privileges from any terminal and access to all commands.

Then logout and log back in as <new-user-name> to verify the last operations worked.

Having a Linux shell console access that isn’t dependent on network drivers or other frail configuration is essential. But because the console shell continues to randomly print out status messages, it is not ideal to work in (particularly when editing with ‘vi’). Instead, the way to proceed is to provide the new user SSH access. Once established, shell access no longer requires a serial connection, multiple simultaneous shells are possible, and console debug statements will no longer interfere.

To allow the new user to ssh, edit the sshd configuration file:

Add the <new-user-name> to the line at the end of file so it reads like:

The board’s default configuration uses DHCP. Generally, this is convenient, but in this case there is a slight wrinkle. Every time the board boots, it appears to get a new/different IP address. I assume that it may be presenting different and/or random generated MAC addresses, but I haven’t validated that.

To make network and SSH access simpler, it helps to assign the network interface a static IP address.

Temporarily, this can be done with:

Unfortunately, though, that does not survive reboot. To ‘permanently’ set the IP address, edit the file /etc/sysconfig/network-scripts/ifcfg-eth0 to look much like this (after substituting your own desired network parameters):

The package manager used in the Yocto Fedora distribution is ‘Yum’.

The find out if there are any later packages available:

To actually update to the latest packages (I had to do it twice for it to complete):

And to clean up and reclaim space:

When searching on how to do this, be aware that the instructions for connecting to a WPA/WPA2 access point are different than the prior WEP ones. The following page provides pretty detailed instructions relevant to this linux distribution to allow you to connect to your WPA/WPA2 wi-fi access point:

And since the wi-fi is started in the /etc/rd.d/rc.local script, this is where you can add a command for the wireless connection to get its IP address. If you are using DHCP, use

If using a static address, use:

An oddity I encountered using this device had to do with how the network interfaces interacted with ARTIK's preliminary web application. It appears that ARTIK's web application has an instance for each network interface. That is, any changes I did through the hardwired interface (eth0) only affected that configuration. If I simultaneously brought up a browser on the wireless interface (wlan0), I had to start all over.

In summary, this appears to be a very impressive platform, even in Alpha stage. By the time Beta and RTM will be ready, developers will be able to connect the boards to cloud services to help them build applications. I look forward to continued testing of ARTIK and SAMI in the coming weeks and months of this rolling release.