The next round in my birthday table decoration challenge.

The next round in my birthday table decoration challenge. 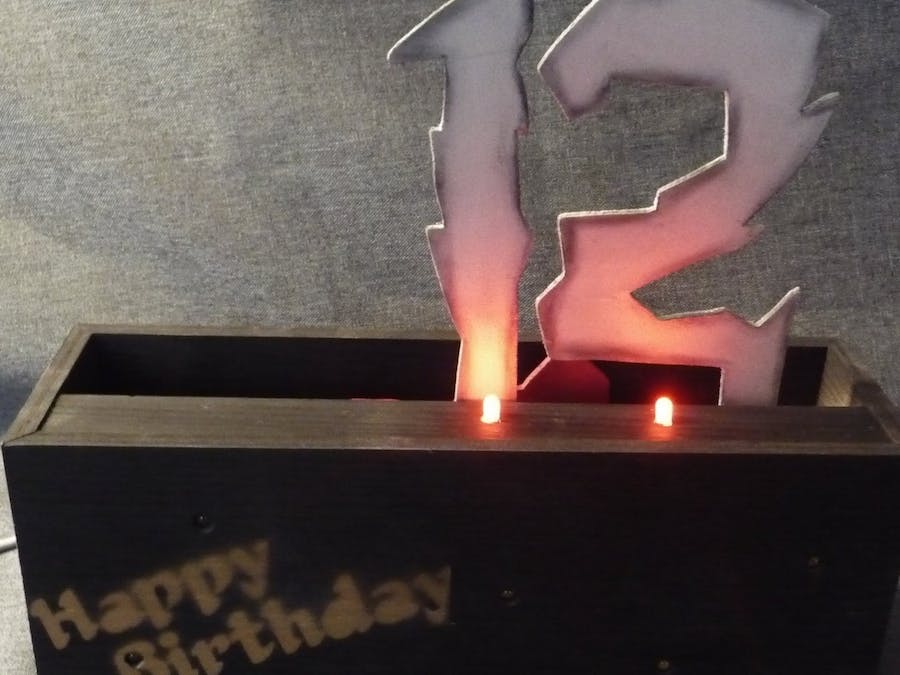 Another year is over and the preparation for the next birthday is running. This time, a bit more movement should come into the table decoration.

For the history of this article you should look at the Project 11 briefly. The implementation of the 11 was fun. This year, I wanted to put some movement on the table. And there's another birthday girl's request: it must have something to do with Harry Potter!

With the keywords Movement and Harry Potter my first idea was the Weasley's house clock, which shows when a Weasley is at home.

I wanted to implement that so that instead of the persons, the numbers 1 and 2 appear. At the beginning the two numbers are invisible in the box. After switching on they fold out and make a few movements.

Sketch of my construction

I've glued the box together out of 4 wooden strips - sawn miter - together. The movement of numbers is done by servos. The installation was very simple in this case. They were only glued to the inside wall of the box with hot glue.

Bottom view with Servo 3 and LEDs

The numbers and 1 and 2 are sawed out of plywood and glued to the usually included arms of the servos.

Fixing the numbers with nails

As a microcontroller, I chose an Arduino Nano. The power comes through a small power bank. Both fit quite well in the box and also holds a party long.

So that the noise level of the servo's does not bother permanently, the "12" should stay in the end position for a while. My simple servo's produces a little noise anyhow. That's why they will be turned off, if they stay longer in one position.

A servo is easily moved via a write command. For this I have defined two limit values top / bottom.

For a little more Harry Potter feeling, each number has been enhanced with its own RGB LED. So a few colorful flash effects can be installed when they appear or disappear.

As a color for the box, I chose black. That was already pretty dark. Therefore came on the front again 6 more LEDs. Each 2 of them are controlled by a pin.

For the LEDs I use a running light effect.

To the two servo's 1 and 2 came another with a sign "Congratulations". You find some impressions in the Youtube video.