The SoftHub has recently been updated with improved BLE beacon support. We show an example scenario incorporating multiple EnOcean sensors.

The SoftHub has recently been updated with improved BLE beacon support. We show an example scenario incorporating multiple EnOcean sensors. 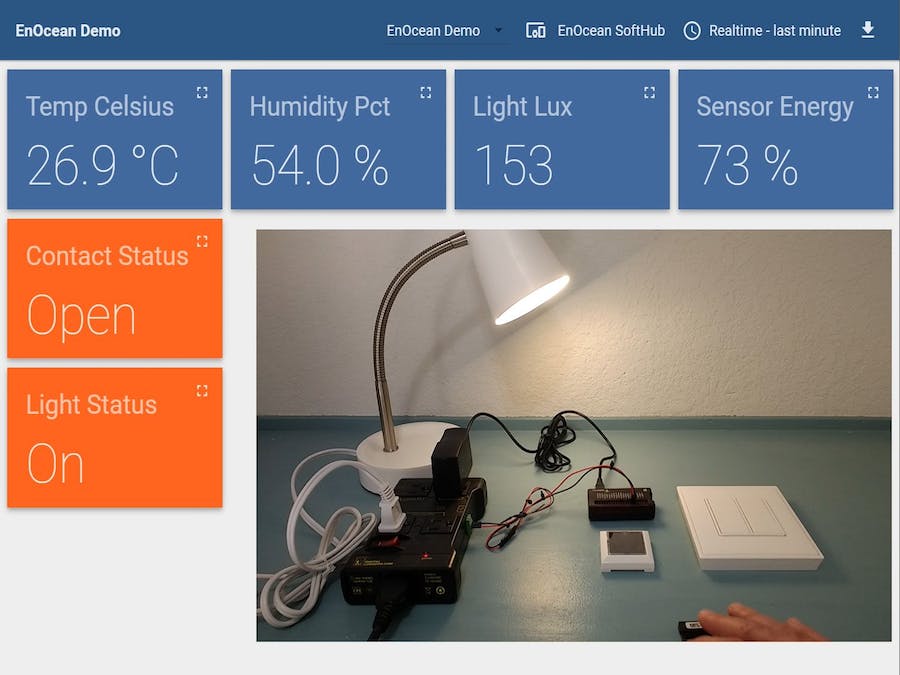 The OmnIoT SoftHub Platform turns your Raspberry Pi 2, 3, 4, or Zero/W device into a powerful IoT edge hub/gateway. It incorporates an object based rule engine as well as a pre-supported library of sensors so you can create typical IoT edge applications in minutes time and with no programming required. Recently the SoftHub's BLE beacon support has been enhanced and in this project we show a simple scenario where the SoftHub has been configured to capture and analyze advertisements from multiple EnOcean sensors. The EnOcean sensors used in our example are energy harvesting (batteryless). The EMSIB multi-sensor, which we use to detect proximity and light levels, gets its power from the ambient light. The EDRPB rocker switch derives power from the physical act of depressing the switch.

The scenario illustrated in the video below show's the following -

Configuring the SoftHub to perform the tasks show in the video took roughly 30 minutes from start to finish.

*On New Packet from the EMSIB multisensor -

So with the definition of 9 simple rules, and the objects required to support those rules, we were able to create and deploy our configuration file in about a half an hour. A link to a zip file containing the RuleFile and supporting files (for publishing data to the ThingsBoard dashboard) is below. There's also a link to the SoftHub's FAQ page and YouTube channel for lots more information and "how to" videos (our example only scratches the surface of the SoftHub's functionality). The SoftHub is completely free to download and use and the full installation package is available at the OmnIoT webpage. Lastly we've included a link to the SoftHub Hackster.io product page.

If you have any questions or need help with a project please let us know!