eGFI is proudly brought to you by the American Society for Engineering Education.

eGFI is proudly brought to you by the American Society for Engineering Education. 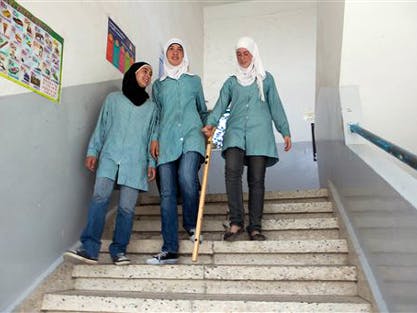 Next month the Intel International Science and Engineering Fair takes place in San Jose, California, where students from over 50 countries will compete for a $75,000 grand prize. Among them are the first Palestinians to participate in this prestigious event.

Asil Abu Lil and her two classmates, who reside in the Askar refugee camp in the West Bank city of Nablus, built an obstacle-detecting walking stick for a class project at their United Nations-funded girls’ school.

The inspiration for the cane came from watching Asil’s blind aunt and uncle struggle to hike the rough terrain of their hilly city. The cane uses two infrared sensors, one in the tip and one facing outward, to detect obstacles and holes in the ground.

While laser canes have been used since the 1970s, a new feature in the girls’ model – a beep that sounds whenever the cane detects, then passes over a hole or step – improves over previous designs.

Despite travel restrictions in the West Bank, the 14-year-old girls managed several trips to Ramallah, about 45 minutes away, to search electronics stores for the proper circuits and sensors.

After besting dozens of West Bank contestants to enter the fair, the team only had sufficient funds to send two girls to San Jose.  But when the U.N. workers learned that Asil would stay behind, they pooled enough money to buy the extra ticket.

Now, with guiding cane in hand, all three girls will journey far beyond the craggy hills of their homeland.