This exoskeleton was designed to help a patient suffering from paralysis to rehabilitate faster.

This exoskeleton was designed to help a patient suffering from paralysis to rehabilitate faster. 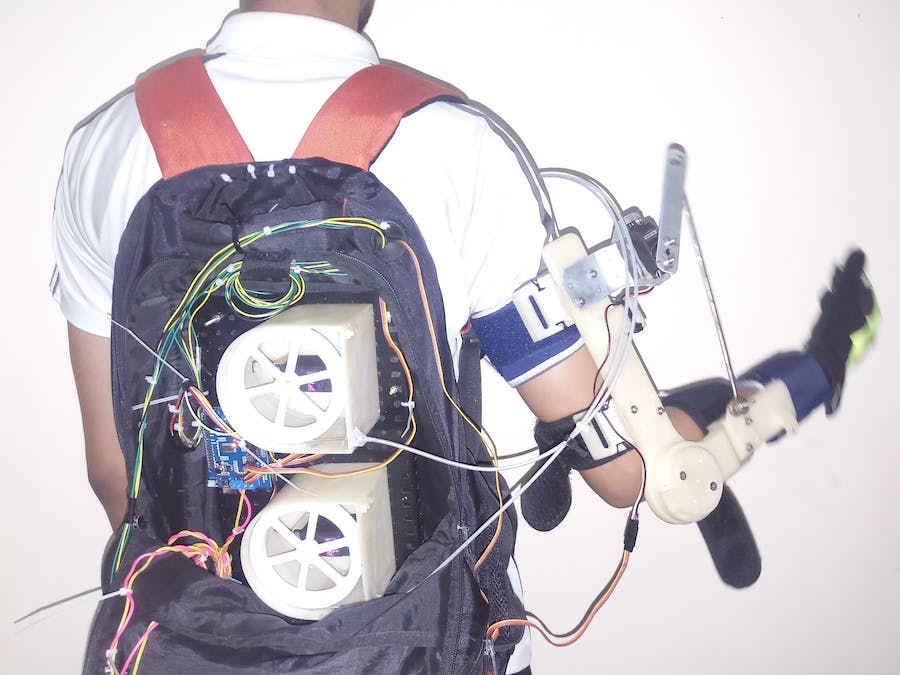 Human beings have evolutionarily developed movement on pair of limbs which provides the coherent benefit of minute energy consumption. But this slick motion can also be hindered due to a diverse set of reasons like stroke, accidents and soon. The survivors are rendered with weakened limbs and require substantial effort in rehabilitation and regain routine gait. So, our objective in this project is directed at developing a novel type of exoskeleton to facilitate easy movement of the arm of a paralytic individual and also enabling them to work at their own efficiency involving daily chores.In the wake of that, we first developed a prototype model. for both arm and hand to check whether our concept is working or not. Our two concepts were wire technology and a link mechanism for providing motion to the exoskeleton. The finalized model was produced using 3D printing that gave strength to the model to act as a rigid body to hold high loads and equally easy to operate by the same individual or by any other. High torque servo motor was used for providing torque to the whole system using four bar like link mechanism.. The operating and controlling were done using Arduino and joystick. With the above course of action, the exoskeleton was able to meet the defined requirements satisfactorily.

Through the entire course of designing and fabricating the project we inferred and substantially understood the importance and role of torque for the correct selection of motor to drive the entire system. The Exo-glove showed fairly satisfactory results with a motion range of 0 to47 deg on average which is sufficient to grab day to day objects.The forces that could be exerted was found to be around 9.3 N. The only setback was that the objects couldn’t be held properly due to lack of friction between the two.

For the Arm portion the angle through which was found 00 to 1000 for lifting customary object required in day to day activities. Thus, the motor use could ensure transmission of ample torque to fulfill the required task. On average the efficiency was found to be 80% with decrease to almost 59% with increase in the load to be lifted. The potential solution to this problem could be usage of more powerful high torque motor. A four-bar mechanism was used in the arrangement which made it semiflexible and fetched the expected result. Initial trial of the Arm portion didn’t prove effective with fishing wire because lack of rigidity in the wire. Also, Bowden Cable transmission required more torque. A combination of a high torque motor and Bowden cable for transmission may enable to make the exoskeleton fully flexible without compromising fruitful performance.