A SmartLiving Experiment for Arduino, to detect when something is moving in a room and warn you visually via an LED and an e-mail.

A SmartLiving Experiment for Arduino, to detect when something is moving in a room and warn you visually via an LED and an e-mail. 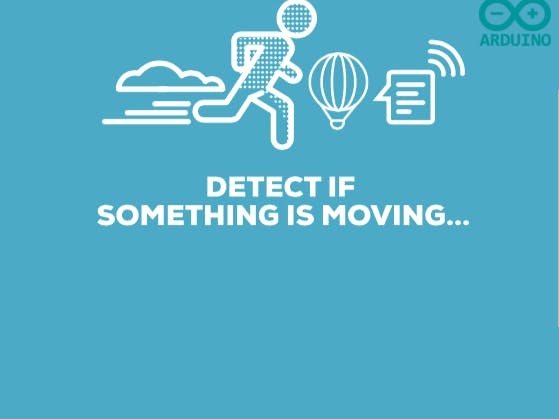 This experiment is a nice example how you could make a security detector. You can place the PIR sensor in a room but also in a closet to protect valuable things you care about and get email notifications on demand.

This is a project built with SmartLiving.io an end-to-end IoT solution (Much like an open mashup of Xively and IFTTT) that's built for makers and developers.

Basic knowledge how to work with an Arduino is a must have, if you've never used an Arduino before we suggest the SmartLiving getting started guide.

If you stumbled across this page you can get all this hardware and equipment in the SmartLiving IoT Starter Kit: Arduino Edition.

An Arduino is represented as a device in the SmartLiving Cloud.

Click on the circle on the righthand side of the device to see an overview.

Currently your device has no assets. The assets, in this experiment include a PIR sensor and actuator LED, which will be created automatically by the sketch on the Arduino starts up.

On the right side of the screen, you will see Device Id, Client Id and Client Key which you will need to be entered in your Arduino sketch.

The Device Id is unique for each of your devices, this is used together with your Client Id and Client Key in your code to access and identify your device securely and safely

Once you've updated your Id's and MAC address you can now validate and run your sketch.

In the setup method, you'll notice the assets for the PIR sensor and LED actuator, these are created with the “Device.AddAsset()” function provided from the library. The SensorName, SensorId, ActuatorName, and ActuatorId are used to define the asset which will be created in the SmartLiving Web App. You don't need to edit any of these details but, ensure the sensor/actuator Id’s are unique in your sketch.

After the sketch has compiled and uploaded you should now see the assets created under your device in the SmartLiving Web App.

It’s time to test the first part of the experiment.

You should see a widget representing a toggle. When you change the position of the toggle button the LED will now turn ON and OFF.

You can do the same for the PIR sensor, except when the motion is triggered, by waving your hand in front of the PIR sensor for example, the toggle button will switch position, returning the boolean value of the sensor.

For this we are going to use the rule manager in the SmartLiving Web App. The rule manager allows us to configure condition based logic triggers between assets and services. Time to set up the rule:

Rules are setup in three steps, a simple wizard will guide you through the process.

In the first step configure the WHEN trigger.

In the second step configure the THEN action.

Finally we can Create and Activate the rule we have defined.

Test the first part of the experiment

It’s time to test the experiment. Activate the motion sensor (Just wave your hand over it, or do a dance), this should trigger the LED on the Arduino.

Did it work? Yes? Great! You just made a Smart device!

If it didn't work, too bad, go over each step again and test each part carefully (Failing that you can check out the Help & Support).

Now lets setup a second rule using the email-me service to notify us when there is movement.

This can for example be used as a security system to detect if someone enters a restricted area or secret room when you're not around.

email-me is one of the services available through the SmartLiving Cloud which can be used in your automation rules.

The email-me service is an easy-to-use notification service which sends an e-mail to the mail address that you used when you signed up. We made it so simple that you don’t have to configure anything for the mail service itself. You just have to choose it in the rule!

Setup a rule for the email service

Set up the rule:

In the first step configure the WHEN trigger.

In the second step configure the THEN action.

It’s time to test the experiment. Let's trigger the motion sensor (wave your hand over it). Give it a moment and you should now receive an e-mail notifying you that there was movement!

Did it work? Yes? You've now got a Smart device talking to an email service!

If it didn't work, go over each step again and test each part carefully.