Instead of pressing the remote controller button, let's use a gesture sensor to unlock the office door!

Instead of pressing the remote controller button, let's use a gesture sensor to unlock the office door! 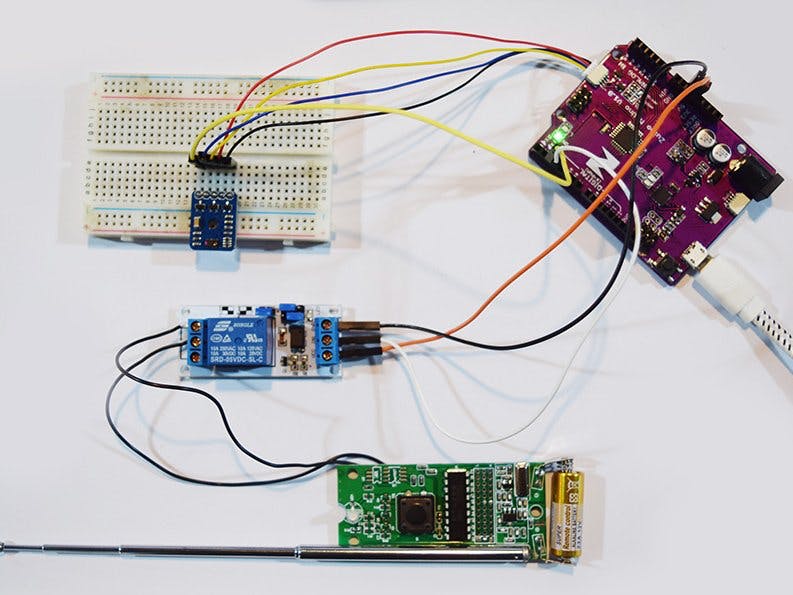 Here is what I did to reach my target goal. Firstly, of course, I took apart the remote to get a better idea of how remote worked. I noticed the battery was 23 amps by 12 volts meaning the voltage from my Zuino would not be strong enough to power the remote to send a signal.

After hours of thinking, I noticed the answer was right in front of me, literally. On my desk there was a five volt relay switch which I could use to power the remote without having to add an external power source.

I then used a multimeter to see what points on the board controlled the switch and which I could use to relay a signal back into the remote to trigger it. Then I soldered jumper wires onto the points so that I could easily connect it to relay module.

I finally knew the hard part was over. From there I only had to get from the hardware side was a Zuino, a mini USB cable, Qwiic cable, and male-to-male jumper wires which were all lying around the office.

Setting up the hardware shouldn’t be too hard, it’s just plugging a couple of wires in while the guide is given to you.

I opened the Arduino IDE software and upload the library files. One thing I totally forgot to change the digitalwrite port which connects from the Zuino to the IN1 on the relay. Lastly I uploaded the code to the Zuino.

All looks good, it didn’t work.

Looking carefully through my code and playing around with all the delays, I then noticed the problem. I thought 10ms would be enough for the remote control to send the signal out and open the door, but it failed, it took me around 20 minutes to find the problem, I tried to change the delay time to 100ms, still not working. Then 500ms, finally, it worked pretty good! Don't worry, the code I have given you has the problem fixed.

Drum roll ... It works. Voila, we will never have to flip another switch to open that pesky door.

12 projects • 4 followers
We're a group of fun-loving, electronic DIY'ers with Smart-Prototyping.com. We hope to share useful tutorials as well as the cool things!
ContactContact