Using a processor, some code and electrical tape, we can bring Sans from Undertale to life. You're gonna have a bad time...

Using a processor, some code and electrical tape, we can bring Sans from Undertale to life. You're gonna have a bad time... 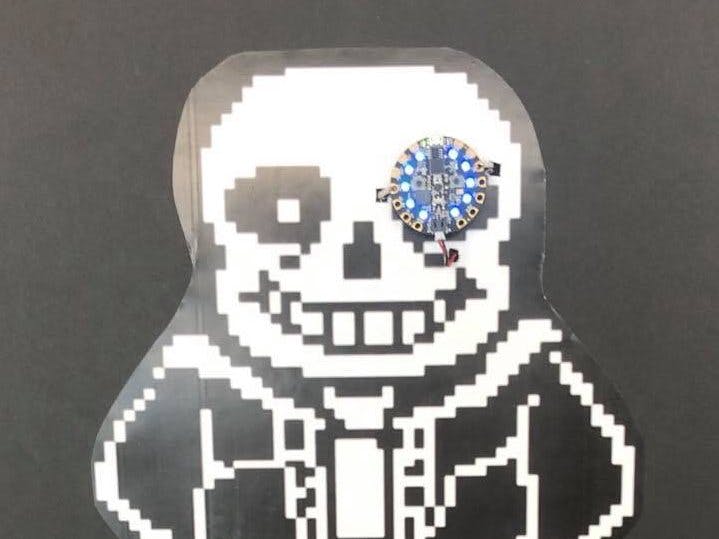 When I initially received the instructions for my Switches & Knobs project, the first thing that came to mind after learning that the Circuit Playground Express could display colors and play music was the final boss fight in Undertale. In this video game, you can fight a skeleton boss character named San who flashes blue light in one light while his boss theme music plays. I decided to use MakeCode and the rest of my materials to create an interact-able poster of Sans that would activate the circuit board to flash blue and play the first few chords of Megalovania.

I slowly went about collecting the necessary materials to make my idea a reality. Firstly, I acquired the necessary Adafruit products such as the circuit board, alligator clips, lithium battery and usb to micro usb cables. Next, I went to a printing shop to acquire 13 x 19 posters containing the Fight image and Sans sprite from Undertale. Lastly, I acquired aersol spray glue along with a large black poster board courtesy of the Visual Arts Department at UCF. After acquiring my materials, I set off to work.

After using MakeCode to recreate the first four chords of Megalovania and create the proper code, I was able to set up circuit board. I had set the board to where it would continuously flash blue continuously unless pin A2 was pressed. Once pin A2 was pressed, then the color would begin flashing between purple and blue while also playing the first four chords of the song for 6000 miliseconds. I used alligator clips to connect both the A2 pin and 3.3 volt pin to a red button "switch". Once the song was over, the lights would go back to being blue until the button was pressed again.

Once I made sure the button worked with my circuit board, I began working on my board. Firstly, I cut out Sans and the Fight image from their posters and sprayed them with the adhesive aerosol can to stick them to the black board. Next, I cut out small holes near Sans left eye so both the alligator clips and the lithium battery cable would fit through them. Afterwards, I cut another, larger hole on the heart in the Fight image in order to fit my button through it. Then, I used electric tape to tape down both the alligator clips and lithium battery to the back to the board. Finally, I attached the clips to their respective pins along with connecting them to the red button.

Once everything had been set up, I finally recorded my completed project to bring Sans from Undertale to life.