Show smile/angry emojis to the driver behind you.

Show smile/angry emojis to the driver behind you. 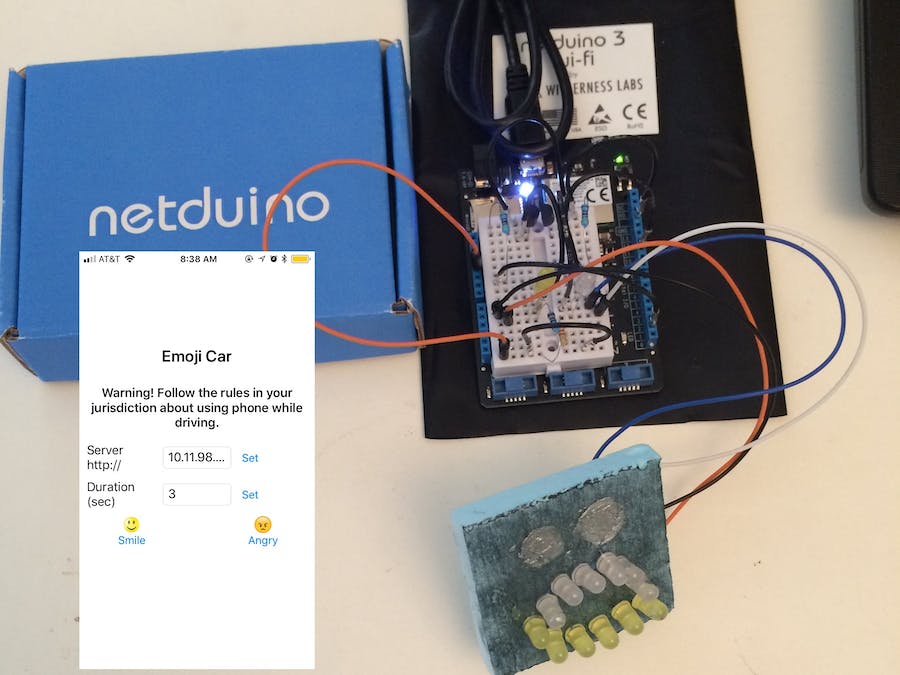 Have you been in a situation when someone was kind enough to let you merge in front of him/her? Or is the driver behind annoying you by tailgating/have bright lights on?

You would communicate with the driver by hand (or finger 😊) gesture. With this project, you can use mobile app to send a signal to Netduino using REST API. Netduino will turn a set of LEDs on and the device will show Smile/Angry emoji to the driver behind you.

Netduino is similar to Arduino with add-on of the built in WiFi. Its software stack consists of Maple REST API server. REST API to control LEDs has been built on the top of it using C#. When the server receives a request to turn on Smile/Angry LED, it will turn on the corresponding pin and start a timer. After the timer triggers, it will turn the both the pins off. The messages received from REST APIs are not sequenced.

The app provides ability to set server IP address and the time duration of theSmile/Angry emoji. When user presses Smile/Angry button, the app uses HttpClient to send REST request to Netduino. As described in the earlier paragraph, Netduino shows appropriate emoji. Make sure that the app and the Netduino are on the same WiFi.

In the current.NET version, the timer does not have stop functionality. So, if you send a command prior to the existing timer is over, it will simply be ignored.

Duration change is entertained when the next timer starts.

You can put this in the car

Building and Using the Mobile App

Thanks for reading till the end :) Please share and respect this project. Cheers!

2 projects • 59 followers
IOT fan tinkering with "things" and developing mobile apps that connect to hardware
ContactContact
Thanks to Taj.