As part of UNC Charlotte's Formula SAE team, we built a race car to compete this May at the SAE National Competition in Brooklyn, Michigan.

As part of UNC Charlotte's Formula SAE team, we built a race car to compete this May at the SAE National Competition in Brooklyn, Michigan. 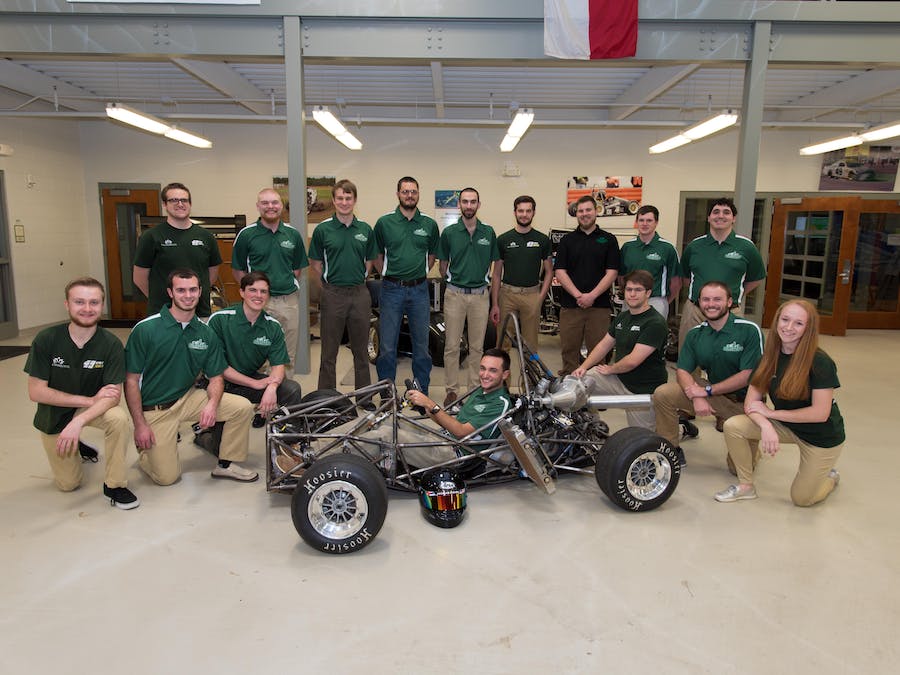 Our goal at the beginning of the project was to build a Formula SAE racecar to test and eventually take to competition in the spring of 2016 in Brooklyn, Michigan at Michigan International Speedway. We wanted to be able to monitor and log data from the car which would allow us to diagnose, solve and prevent any problems that occur as well as tune the engine and setup of the car. Our sights expanded further as the project progressed and we sought to be able to feed live data to the driver via a digital dash screen attached to the steering wheel. Streaming data to the driver allows him to be aware how the car is running with reliable data from various sensors around the car in real time without solely relying on driver feel allowing the driver to focus on his job of navigating the course.

One of the largest problems coming into this year was having a lack of battery stability due to the systems on the car drawing more current than was being produced by the stator. To attempt to solve the issue we tried to make the system as a whole more efficient by reducing the current draw on major components. The first step in solving the current draw issue was to identify the components that draw the most current. The largest draw source was found to be the fuel pump. After further investigation, we decided that the fuel pump was well over sized for our application. Downsizing to a the OEM fuel pump alone, which is much smaller, along with redesigning the whole wiring loom and having all of the wires cut to proper lengths greatly reduced the amount of current draw while also allowing us to clean up the wiring in the system.

Throughout the car there many different sensors that measure different areas. The primary areas that we measure are temperature and position. All of the temperature sensors are thermistors while the position sensors are primarily comprised of Hall Effect sensors.

Currently the engine, oil and air inlet temperature are measured and fed to the dashboard as shown in Figure 1.

Temperature Sensor NTC M12 – Thermistor type temperature sensor that measures the water temperature. We chose this sensor because it is a thermistor which is generally more reliable than RTD sensor and it has our desired range of temperature reading. Also the sensor is small and packages well within our system. We use data from this sensor to monitor the temperature and to make sure that we are operating within our desired temperature range which is between 80-100°C. In the event we are beginning to overheat we have programmed the dash to display a warning to the driver as shown in Figure 2.

The temperature that the warning is designated to pop up at is at 101°C. This same sensor is not just used when the engine is too hot though, it is also used to configure the engines cold start compensation to allow the engine to run while it is below the ideal operating temperature.

For our air intake temperature sensor we used another thermistor. The sensor also doubles and a manifold pressure sensor, Figure 3. Having the capability to monitor manifold pressure we made the discovery that we were not maintaining as high of a manifold pressure as we previously have. This led us to believe that we had an air leak somewhere within our system. After investigating the issue we were able to determine that there was not one, but several leaks within the system. The main leaks where between the restrictor plate and the manifold itself with the other leak being where the manifold connects to the air intake port on the engine. We were able to improve greatly on our previous design that used a rubber boot to attach the manifold to the engine and move to a double o ring flange that bolts directly to the head of the engine. The flange was machined out of a piece of billet aluminum on a Haas CNC mill.

To measure the engine RPM, two Hall Effect sensors are used, one on the cam shaft and another on the crankshaft. A Hall Effect sensor is placed perpendicular to a gear attached to the item desired to be measured. We are using proximity detection sensors which are magnets that detect the peaks in the gears and outputs an increased voltage. This signal is interpreted and the outcome is a speed, which being crank position and cam position signals, naturally our speed output is RPM of the engine.

These Hall Effect sensors can be used for a wide range of chores, and we are actually using another set for our wheel speed sensors. As seen in Figure 4 the setup for these is the same and they operate in the same manner as the sensors stated above, but since these are mounted on the wheel hubs the speed output is wheel speed. Right now we only have the two front wheels fitted with sensors, so the only use for these would be in displaying vehicle speed. If all four corners of the car were equipped with these Hall Effect sensors, we would be able to run a traction control on the car as well as monitor vehicle speed.

For engine management and data acquisition we are using a Motec M400 ECU, Figure 5. This allows adjustable engine timing and fuel curves with the help of a single oxygen sensor for lambda values and supports compensations for situations such as cold starts. For our purposes, we are mainly using this ECU to adjust the fuel map to allow the car to idle smoothly and run properly throughout the rev band. We are also using a Motec C125 dash display to monitor the engine remotely from the driver’s seat and display shift lights to avoid over-revving during high pressure racing.

We were fortunate enough to have guys from Motec come help us tune on the car, however this tuning session was cut short due to an oil pump gear failure within the engine that required a rebuild. From then on it was up to us to tune the car to run properly. We have been adjusting the fuel map based on feedback from the Lambda sensor, throttle position sensor, and the two Hall Effect sensors for engine RPM. The car now idles quieter than ever before, which was a huge problem for us during last years competition as the car must meet a sound ordinance of less than 110dBc. Since Friday we now have a pretty good tune on the car that allows it to run smoothly but still only produce 40hp. A picture of the fuel map and Motec tuning software can be seen in Figure 6.

As mentioned previously, we have been tuning the fuel map, and the main sensor in influencing these adjustments is the lambda sensor, or also known as an 02 sensor. A lambda sensor screws into a bung on the exhaust fairly close to the head where all the exhaust gasses are being pushed out of the engine. Lambda sensors integrate a zirconium dioxide sensing element that compares the oxygen present in the exhaust gases to the oxygen present in ambient air and the difference in concentration causes the ions to travel from high concentration to low concentration, this flow generates a potential difference. This potential difference ranges from 0.1V to 0.9V and the signal is sent to the ECU for interpretation. For a higher voltage, there is a larger concentration difference which means the engine is running rich. The lambda values that we monitor ideally stay around 0.9-1, where 1 is a stoichiometric mixture of 100% combustion; anything above 1 the engine is running lean, and anything below 1 the engine is running rich. For maximum power at 100% throttle we are aiming for a 0.9 lambda value where it is a little rich but not enough to harm the engine. Figure 7 shows the breakdown of a basic lambda sensor, and you can see that we monitor lambda values on the dash while driving the car in Figure 8.

When the complete wiring harness for this year was being designed, we had begun thinking of any and all areas we would want to monitor. While most of the sensors including temperature sensors such as water, oil and air intake and position sensors such as throttle, crank and cam position are included on the car, not all of the sensors made the final cut. The car is wired to support linear potentiometers to measure suspension travel on every corner of the car and Hall Effect type sensors to measure wheel speed from each wheel on the car, however those are not currently featured on the car. We had planned on using the potentiometers to give use greater insight into what is happening to the suspension and chassis in dynamic situations such as cornering, and to help fine tune the car. The wheel speed sensors would have allowed the team to design a traction and launch control system for the car however being conflicted with time constraints and struck with reliability issues the potentiometers and wheel speed sensors were left off of the car.

From manufacturing the chassis to being able to monitor what is happening throughout the car, there have been many lessons learned. Between learning from MoTeC engineers and trial and error testing we were able to utilize many sensors that would allow us to more finely tune the car for our application. As a team, we were not only able to successfully read data provided by sensors but also the task of sending that data to a dash mounted on the steering wheel so the driver is aware of what condition his vehicle is in was accomplished as well. After finding our desired temperature zones we were able to pick which sensors would best fit our application and apply them to the car. With proper readings, new found abilities in basic engine tuning, obtaining and implementing a digital dashboard and overall a new, much more thorough understanding of types of sensors and how they work, we were able to take the car and the team to another level.