Arduino is used with MQ-135 to determine the air quality and then this value is updated to ThingSpeak channel.

Arduino is used with MQ-135 to determine the air quality and then this value is updated to ThingSpeak channel. 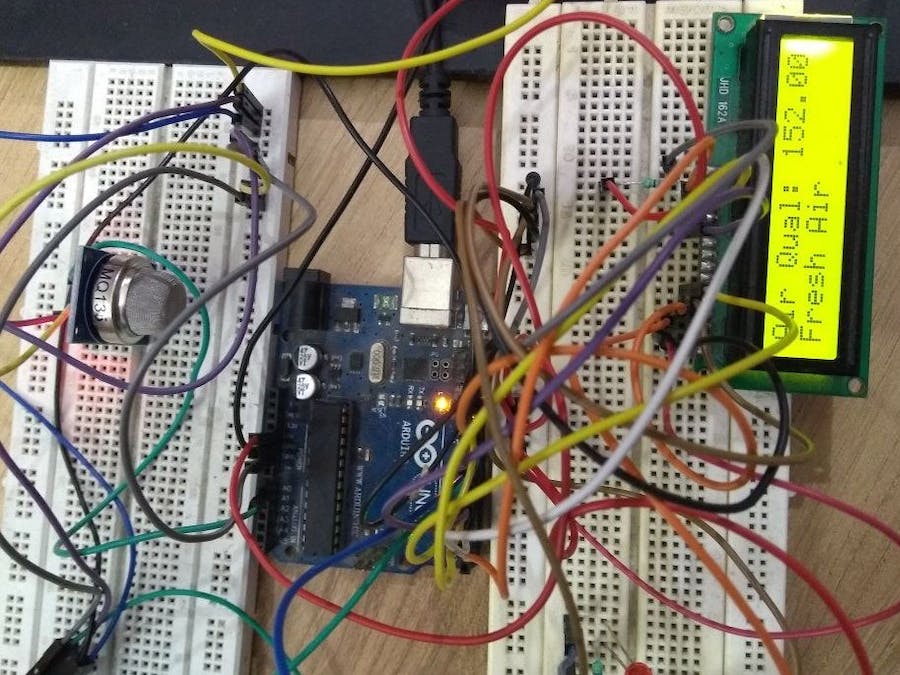 Air pollution has become a common phenomenon everywhere. Specially in the urban areas, air pollution is a real-life problem. In the urban areas, the increased number of petrol and diesel vehicles and the presence of industrial areas at the outskirts of the major cities are the main causes of air pollution. The problem is seriously intensified in the metropolitan cities. The governments all around the world are taking every measure in their capacity. Many European countries have aimed to replace petrol and diesel vehicles with the electric vehicles by 2030. Even India has aimed to do so by 2025.

The main aim of this project is to develop a device which can monitor PPM in air in real time, tell the quality of air and log data to a remote server(ThingSpeak).

The air monitoring device developed in this project is based on Arduino Uno. The Arduino board connects with ThingSpeak platform using ESP8266 Wi-Fi module. The sensor used for monitoring the air pollution is MQ-135 gas sensor. The sensor data is also displayed on a character LCD.

The total cost of the material is around $40.

Arduino Uno is one of the most popular prototyping boards. It is small in size and packed with rich features. The board comes with built-in Arduino boot loader. It is an Atmega 328 based controller board which has 14 GPIO pins, 6 PWM pins, 6 Analog inputs and on board UART, SPI and TWI interfaces. In this IOT device, 9 pins of the board are utilized. There are six pins used to interface the character LCD. There are two pins utilized to interface the ESP8266 Wi-Fi Module and an analog input pin is used to connect the MQ-135 sensor.

The 16X2 LCD display is used to monitor the sensor values read by the Arduino board from MQ-135. It is interfaced with the Arduino Uno by connecting its data pins D4 to D7 with pins 6 down to 3 of the controller respectively. The RS and E pins of the LCD are connected to pins 13 and 12 of the controller respectively. The RW pin of the LCD module is connected to the ground.

The ESP8266 WiFi Module is a self contained SOC with integrated TCP/IP protocol stack that can give any microcontroller access to your WiFi network. The ESP8266 is capable of either hosting an application networking functions from another application Each ESP8266 module comes pre-programmed with an AT command.

The ESP8266 supports APSD for VoIP applications and Bluetooth co-existence interfaces, it contains a self-calibrated RF allowing it to work under all operating conditions, and requires no external RF parts.

For connecting ESP8266 Module with Arduino Uno, you need 3.3 voltage regulator because Arduino is not capable of providing 3.3 v to ESP8266.

The MQ-135 gas sensor senses the gases like ammonia nitrogen, oxygen, alcohols, aromatic compounds, sulfide and smoke. The operating voltage of this gas sensor is from 2.5V to 5.0V. MQ-135 gas sensor can be implementation to detect the smoke, benzene, steam and other harmful gases.

The MQ-135 alcohol sensor consists of a tin dioxide (SnO2), a perspective layer inside Aluminium Oxide micro tubes (measuring electrodes) and a heating element inside a tubular casing. The end face of the sensor is enclosed by a stainless steel net and the back side holds the connection terminals. Ethyl alcohol present in the breath is oxidized into acetic acid passing through the heat element. With the ethyl alcohol cascade on the tin dioxide sensing layer, the resistance decreases. By using the external load resistance the resistance variation is converted into a suitable voltage variation.

The air quality sensor is a signal output indicator instruction. It has two outputs: analog output and TTL output. The TTL output is low signal light which can be accessed through the IO ports on the microcontroller. The analog output is an concentration, i.e. increasing voltage is directly proportional to increasing concentration. The resistance of the sensor decreases as the concentration of the target gas is increased in PPM while for clean air its resistance remains constant.

The VCC and Ground terminals of the sensor are connected to the common VCC and Ground. The Analog Output pin of the sensor is connected to the A0 pin of the Arduino. The analog output voltage from the sensor can be assumed directly proportional to the concentration of CO2 gas in PPM under standard conditions. The analog voltage is sensed from the sensor and converted to a digital value in range from 0 to 1023 by the inbuilt ADC channel of the controller. The digitized value is hence equal to the gas concentration in PPM.

Signup or login there, After that go to my channels.

To Program Arduino Uno we need IDE. Arduino IDE contains a text editor for writing code, a message area, a text console, a toolbar with buttons for common functions and a series of menus. It connects to the Arduino and Genuino hardware to upload programs and communicate with them.

For this project we need two libraries.

How the circuit works

As the device is powered, the Arduino board loads the required libraries, flashes some initial messages on the LCD screen and start sensing data from the MQ-135 sensor. The sensor can be calibrated so that its analog output voltage is proportional to the concentration of polluting gases in PPM. The analog voltage sensed at the pin A0 of the Arduino is converted to a digital value by using the in-built ADC channel of the Arduino. The Arduino board has 10-bit ADC channels, so the digitized value ranges from 0 to 1023. The digitized value can be assumed proportional to the concentration of gases in PPM. The read value is first displayed on LCD screen and passed to the ESP8266 module wrapped in proper string through virtual serial function. The Wi-Fi module is configured to connect with the ThingSpeak IOT platform. ThingSpeak is an IOT analytics platform service that allows to aggregate, visualize and analyze live data streams in the cloud. ThingSpeak provides instant visualizations of data posted by the IOT devices to ThingSpeak server.

In response to this command, the IOT platform must respond by sending back the version information, SDK version and the time bin is compiled.

By setting the parameter in CWMODE to 3, the Wi-Fi connection is configured to SoftAP as well as station mode. This AT command can take three parameters

In response to this command, the IOT platform must send back the string indication the Wi-Fi connection mode set.

In response to this command, the Wi-Fi module must restart and send back a response of 'OK'. After resetting the module.

In response to this command, the local IP address of the Wi-Fi connection is sent back by the module. Now, the module is ready to establish TCP IP connection with the ThingSpeak server. The controller reads the sensor data and store it in a string variable.

In this project, a string containing the URL having API Key and the sensor value as the field and value is passed. The passed field and its value are logged on the cloud server. It is important to pass the API key in this URL as one of the field value in order to connect with the registered cloud service. The Air quality measured by sensor can now be monitored and recorded through the ThingSpeak IOT platform.

About PPM and PM

The three basic units of measure used in reporting air pollution data are micrograms per cubic meter (JLg/m3), parts per million (PPM), and the micron (JL). Micro grams per cubic meter and parts per million are measures of concentration. Both microgram per meter cube and ppm are used to indicate the concentration of a gaseous pollutant. There is an advantage to the unit ppm that frequently makes it the unit of choice.PPM is a volume-to-volume ratio.

Note:- PPM in Air, is a volume-to-volume ratio.

PPM in water and wastewater, is a mass-to-mass ratio.

Parts per million (PPM) is a unit of measurement used for expressing a very dilute concentration level of pollutants in the air, water and other fluids or one item in a million of anything of the same size.

Particulate matter (PM) in the atmospheric air or in any other gas cannot be expressed in terms of ppmv, volume percent or mole percent. PM is most expressed as mg/m^3 of air or other gas at a specified temperature and pressure.

Particulate matter is the sum of all solid and liquid particles suspended in air many of which are hazardous. This complex mixture includes both organic and inorganic particles

Based on size, particulate matter is often divided into two groups.

1. Coarse particles (PM 10-2.5) such as those found near roadways and dusty industries range in diameter from 2.5 to 10 micrometers (or microns). The existing coarse particle standard (known as PM 10) includes all particles less than 10 microns in size.

2. "Fine particles" (or PM 2.5) are those found in smoke and haze have diameters less than 2.5 microns. PM 2.5 is referred to as "primary" if it is directly emitted into the air as solid or liquid particles, and is called "secondary" if it is formed by chemical reactions of gases in the atmosphere. 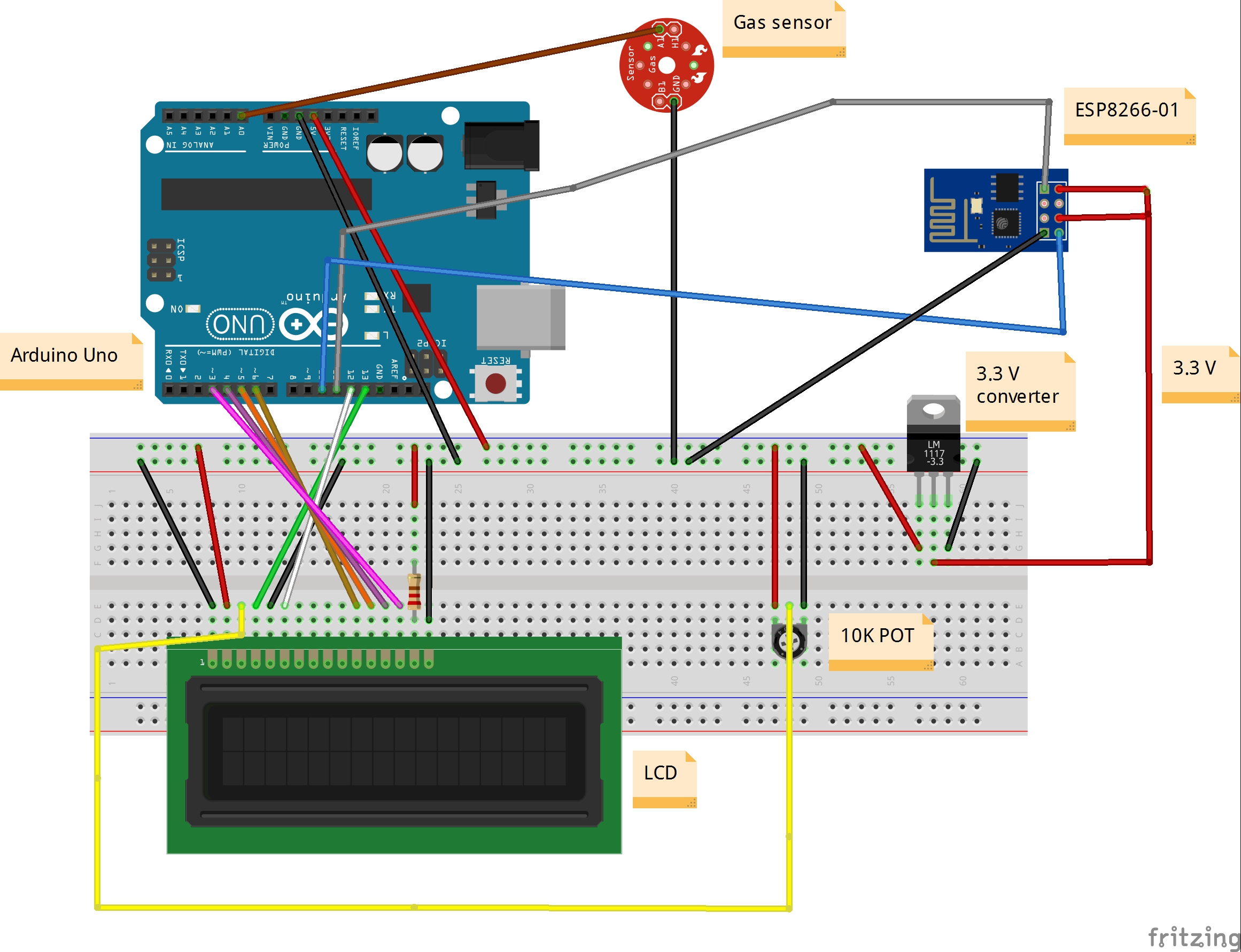