This project covers building and coding a robot that pans, tilts, and THROWS FISTS. Make two and fight 'em to the death!

This project covers building and coding a robot that pans, tilts, and THROWS FISTS. Make two and fight 'em to the death! 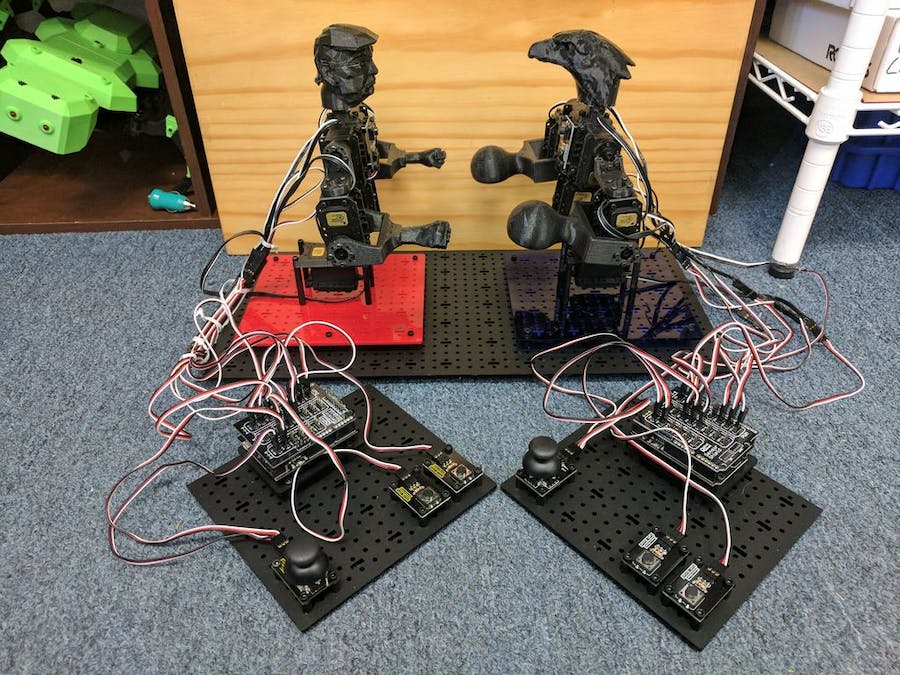 This project covers building and coding a robot that pans, tilts, and THROWS FISTS. Make two and fight 'em to the death! NOTE: Robot fighting is brutal. This is a pretty expensive project, and there is a high probability chance that you'll kill a servo, break a bracket, or blow the diode on your Duino from backvoltage, but there's something about fighting robots that tickles a part of your soul that nothing else can. If you decide to make this, be forewarned, THINGS WILL ABSOLUTELY BREAK. With that out of the way, let's make some robots bust each other to bolts!

It's best to find the M3 bolts at your local hardware store, but if you can't, you can pick up 2 Nut and Bolt Packs and have all the hardware you need.

Center the servos, and make sure they're aligned as pictured as you're building. More info on centering servos here. Follow the rough guide image to attach everything together with the right hardware.

Put together the gamepad in a way that makes sense to you. Pictured is a gamepad with the joystick on the left, the right punch button all the way on the right, and the left punch button to the left of that. The Geekduino is placed on the controller to keep it clear of potentially being damaged in the robot battle.

Follow the wiring diagram to hook your robot up to the Geekduino. Extend the Servo Cables using a 3-pin coupler and Sensor Cable. Make sure to line up the white wires on both of them.

Follow through the Geekduino Getting Started Guide if you haven't set up the Arduino IDE before. The code for these robots can be found in the RobotGeek Libraries and Tools, which you can grab from github here.

YOU'RE READY TO ENGAGE IN FISTICUFFS.

Being that this is most of a humanoid robot, there's plenty of next steps to take! You could learn how to use meshmixer to make your own heads and fists, maybe dress up the bodies a little bit. There are enough servos here to make a robot arm, if you were so inclined to make something more useful than a fighting robot. Maybe you like the fighting robot, and want to put a first person view camera on it and use an accelerometer on your head to aim? Really, it'd be pretty awesome to see a robot fight club turn up.

35 projects • 170 followers
The RobotGeek team is a 6-man operation that wants to make it even easier to use Arduino to make electronics and robots.
ContactContact

35 projects • 79 followers
Hi, I'm Wade, and I'm Projects and Marketing for RobotGeek/Trossen Robotics. I spend all of my free time making things and lying on the floor crying.
ContactContact