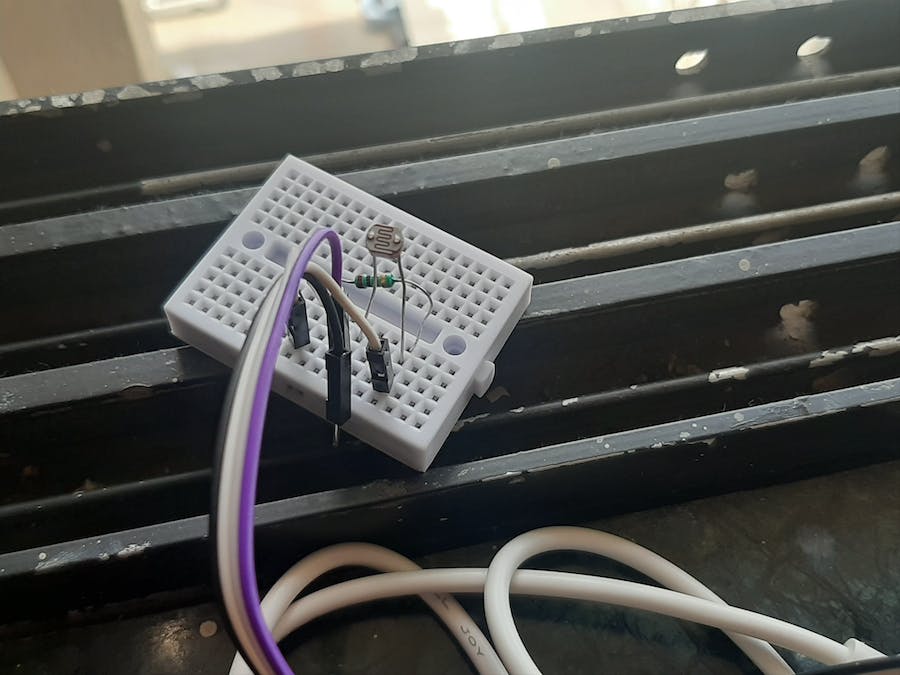 This projects basic function is to predict whether the sun light will be available for the plants or to see if you can have a sun bathe the next day. According to the darkness or light falling on the LDR the Bolt Module measures the changes in the voltage through Analog pin A0. As the light falls on the LDR the resistance increases and by

Formula V= I*R the voltage also increases which is measured by Bolt IoT Module. The data is then gathered and further the prediction is being made.

The Rainy / Monsoon season is arriving in our country as the June is coming then there will be very less sunlight available in the day. For plants to grow or for many other works that needs sun light.

(DO NOT POWER ON THE BOLT MODULE WHILE MAKING THE CONNECTIONS)

Step 1: Insert one leg of LDR in bread board and take one male to male wire and insert one in series with LDR leg and other in 3v3 pin in Bolt Module.

Step 2: Insert other leg of LDR in parallel gap on bread board and take one male to male wire and insert one in series with LDR leg and other in A0 pin of Bolt Module.

Step 3: Insert the other leg of the resistor in the bread board in series were a leg of LDR pin is already there which is connected to A0 pin of Bolt Module.

1) Create a product name it as PREDICTING_LIGHT (without any space in between) select it as Input device and GPIO amd the product will get created.

2) After creating the product go to Configure.

3) In the Hardware part select the A0 pin which is there in the schematic module and give the variable name.

4) Go to the code part. Select the language as JavaScript and write the code for making the predictions and Save it.

5) After saving deploy the configuration while the device is still on.

6) Get the data that the LDR is collecting. Once the sufficient data is collected you can predict the further data.

7) After Predicting the data will be as.