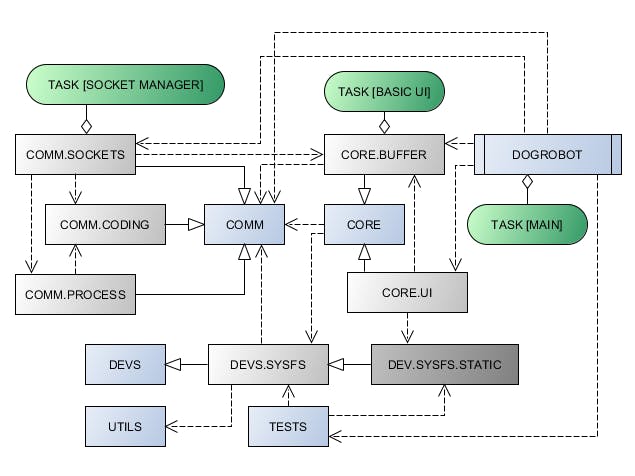 The aim of the project is to build a remote system capable of aspects of Command, Control, Communications, Computers, Intelligence, Surveillance and Reconnaissance (C4ISR) of a home facility.

My family has a beach house, and unfortunately for us it's not possible to be there every day and time, but we like to have the things secure and organized, and we try to have some degree of monitoring and control in order to keep the place safe when we are there or when we are not there. Also we try to take our pets with us as always as we can, and in very hot days it is good to know if the water levels are ok, if their room has adequate temperature, if the food is near to finish or even if the food feeder has a malfunction (it was the origin of the project's name). Knowing these things allows us to take measures, and sometimes we require fast actions which could be better provided with an automatic and/or remote controller. So, first we got a permanent internet connection, some IP cameras installed, made after some reports made by a Raspberry Pi, and the project gave birth with some new ideas, and evolved.

Regarding the amount of possibilities the project has, it is intended to keep as simple as possible to be fast deployed, and some funcions will be kept out from scope or will be kept in our further improvements list. For example, we actually do not need to control the IP cameras Pan/Tilt motors, so it will be out of scope.

The project is implemented in two modules with a client-server architecture using Sockets to provide the communication between them. The first module MOD_RPI is a Ada application running in a Raspberry Pi 1B+ from Raspbian OS, responsible for the embedded tasks. This is the remote system. The second module MOD_WIN is also an Ada application, now running on a Windows 10 machine, with a Control Room HMI submodule. Other applications made in another languages could also be included, as a report generator and e-mail sender made in Bash script from Raspberry Pi. In the present state, the project is composed solely by the sofware design and development, testbenched with a Raspberry Pi, a laptop and an oscilloscope.

The project was developed entirely from scratch without the use of 3rd-party libraries. The only libraries used were available in the GNAT compiler package. The Sockets framework was based on an example from GNAT.Sockets documentation.

Fig. 1 shows the system overview. The Windows and the Raspberry Pi components are the systems representing the MOD_WIN and MOD_RPI respectively. The External Devices component represents the array of relays and current drivers attached to the Raspberry Pi boards which will provide environmental actuation and monitoring.

Thus, the entire system is composed by a dual MOD_WIN and MOD_RPI end-to-end open Datagram Sockets application communicating from Internet.

Fig. 2 shows a Composition Diagram for the system. Despite of UML does not have an specific diagram for representing packages, a such diagram may be usefull for expressing Ada packages because of the inherent Oriented Objects characteristics of those packages. In the figure, the subsystems packages are represented in blue, their direct children in a slightly graduated blue, and the second-level children in a stronger graduating blue. The main application is represented in a marked box, and the aggregated tasks are represented in blue.

The presented packages are given the following responsibilites:

Both MOD_WIN and MOD_RPI projects are comprised in the same GNAT GPS project dogrobot.gpr. The specific code from each module is segregated by the use of compilation directives, and the builder is already configured to construct the proper main application executable for each one of those systems. In short,

This is a very practical way of handling segregating-related projects, since we do not need to manage different GPS files for both projects.

Main MOD_RPIApplication : The MOD_RPI main application is built in bin/server_rpi. On the Raspbian command-line, it has to run with sudo privileges, because it makes high privileges access from sysfs devices. The application runs on a continuous loop and may inform the user from the ssh terminal of reception of messages or event messages. But no further action is required besides the command-line invocation.

Main MOD_WIN Application : Currently the MOD_WIN main application is controlled by direct input/output response provided by the command-line terminal. No administrative privileges on Windows are needed. In present state, the system will ask the user which information should be provided, or which action should be accomplished, take action, and report the results.

The Communication Protocol is composed of 1 type of message to be exchanged from the Sockets channels.

Fig. 6 details the protocol. For a message to be parsed to devices mechanisms, it has to begin with a char "#", and finish with a string "/#". These fields are identified by the Header and the Footer.

Category_Type specificationThe Category field identities the nature of the message.

Message Parsing Sequence1. After receiving the message container, check the its size.2. If one size matches, validate the first char, and the last 2 chars with header and footer.3. If validation is ok, proceed with activation protocol.4. The message handler is then segregated according to each category. Typically REQUEST messages are sent from MOD_WIN to MOD_RPI, and RESPONSE messages are sent from MOD_RPI to MOD_WIN.

Fig. 7 shows the Call Tree generated from MOD_WIN code. The MOD_RPI is similar. The purpose of showing this is to recall the implementation difficulty of this project, and to illustrate the effort in designing and developing it. An very good point is, despite of the implementation complexy, the project may considered to be low-risk as its average cyclomatic complexity is far below 10 as observed by those metrics below generated by GPS.

Some metrics regarding the project