A very good wireless local area (and personal) network is undoubtedly the Bluetooth (BT). Let's play with it!

A very good wireless local area (and personal) network is undoubtedly the Bluetooth (BT). Let's play with it! 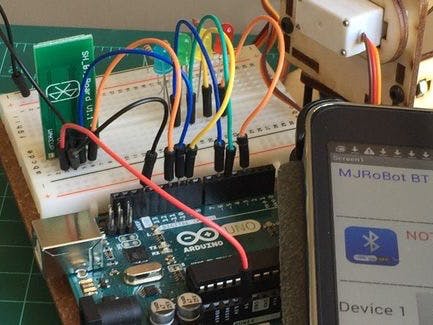 A very good wireless local area (and personal) network is undoubtedly the Bluetooth (BT). Today in our day-to-day is common to find us using cell phones, stereos, cameras, etc., interconnected with the help of the famous "blue little light”.

In the world of IoT and automation in general, it is very common find remote controls via mobile phones using BT technology. This is due to two basic components, but very important:

In this tutorial, I will develop some ideas about controlling Arduino’s outputs through a mobile device in order to move a Robot, turn on lamps on a house, etc.

Step 1: The Bluetooth module and the Arduino

In the market is very common to find "Master-Slave" BT 3.0 modules as the HC-05 and "Slave" ones as the HC-06. More recently, appeared the HC-08 and HC-10 working with technology BT 4.0 or BLE ("Bluetooth Low Energy"). The BLE modules are the only ones that can be connected to an iPhone, because unfortunately Apple does not provide support to BT 3.0.

For the projects discussed here, I will use an HC-06 that is very popular and cheap (Bye, bye, iPhone! Androids are kings here!). The BT module is powered with 5V which makes it to be easily connected to an Arduino UNO for example. His transmit (Tx) and receive (Rx) pins can be connected directly to the UNO, with no need of voltage dividers as we see in the case of ESP8266. Usually the HC-06 should be connected directly to pins 0 and 1 Arduino (“Serial 0”):

When using "Serial 0" inputs (the only HW Serial port at UNO), it is very important to remember that the HC-06 may not be physically connected to pins 0 and 1 during the program load, because the USB port also use the same serial. A simple way to get around this little problem (if your project does not use many GPIOs UNO) is to use a “SW serial port” through the library SoftwareSerial. In our case here, we will use the pins 10 and 11 of UNO (Tx, Rx respectively).

Step 2: Testing and configuring the HC-06

The next step will be to write a simple code in order to test, program and initialize the HC-O6: To start, include the Library Software Serial, setting the "BT" variable to the new serial port.

Then comes the main body of code that simply waits for data coming from the BT. When arrived, data are written in the Serial Monitor. Likewise, AT commands can be sent from the serial monitor to the HC-06 module.

Once the program is loaded, using the Serial monitor do some basic tests, for example:

In general, the HC-O6 comes standard with the password (or PIN): 1234. You can set a new one with the AT command:

OK! Module connected to UNO and running. It is time to introduce the Android device.

There are many apps on the Google store that can be used. I will use an app that was developed by me using the MIT Application2 tool and available free of charge at the Google store: MJRoBot BT Digital Analog Voice Control

The App sends digital commands (thru buttons or voice) and analog commands to control PWMs devices like servos (send data ranged 0 to 255).

The App will then show "CONNECTED", informing that it is "pared" with the HC-06. At this point, test the App buttons and watch at your PC Serial Monitor, what data the App is sending. For example, pressing the buttons "ON" and "OFF" sequentially for the 4 Devices, the result would be:

Now that we have an App for Android talking with the BT module, let's create something useful!.

Let's build the circuit as shown above. The idea is to use the App to turn ON and OFF the LEDS and also controlling their intensity.

That is, to trigger the "ON" related to "Device 1" button, the text message "dev1on" will be sent to the Arduino. Upon receiving this message, the red LED should light and so on.

Note that the 4 pins are the pins capable of generating PWM (not all UNO digital pins can do it. Look for the ones market with “~”. This is important for the use of "sliders" at the App, to send numeric data to control the intensity of the LEDs through PWM:

In the case of sliders, before the PWM data value (0 to 255), a character is sent to the Arduino to inform it that a ”slider" command is coming.

In the video bellow, a demonstration of the portion above program (Buttons & Slider):

Below the complete Arduino Code:

For IoT devices control, voice is a trend nowadays. Getting this type of control using Arduino / HC-06 / Android is extremely simple. Android devices already have this feature by ”factory". In App that I developed, a button was added that makes Android "listen" a command and send it in text format to the Arduino. The code is responsible for "reading" the string that comes.

I added some examples in my code. When the Arduino receives a "Connect TV” command, for example, the green LED (corresponding to the device 3) lights ON (instead of the LED, you could have a relay that would connect the TV).

You should change the strings that are in the Loop part of the code, with commands in your language. I used Portuguese that it is my mother language and was easer to manage at Google due the different accent with my English. You should use short sentences or only words there. The important is a perfect match between what you wrote and with what the Google voice recognition app returns.

Here you can find a link to .aia file that can be run directly on MIT AppInventor2. In the video below, a small demonstration of the voice control:

Well, I believe that with this tutorial, it is possible for you to realize the enormous potential of controlling ”things" using BT / Android / Arduino. As always, I hope this project can help others find their way in the exciting world of electronics, robotics and IoT! For more projects, please visit my blog: MJRoBot.org

Saludos from the south of the world!

See you at my next tutorial!