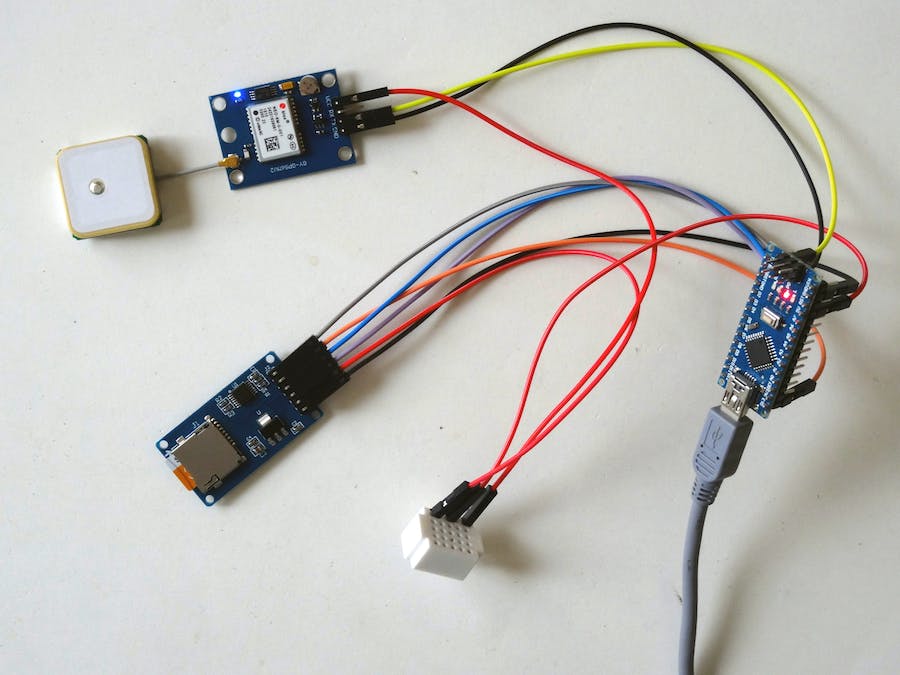 MicroSD Cards are a cheap and easy data storage medium, and they are very convenient for storing Arduino sensor data. There are also a number of cheap readily available MicroSD Card Modules for Arduino, and I already made a tutorial on how to log Ultrasonic Ranger distance to MicroSD Card. I also made a tutorial on how to display Location Information from GPS Module to LCD. Almost immediately somebody asked for for Tutorial on logging GPS Information to a MicroSD.

Logging data to the MicroSD is easy, but file system management takes memory, and can easily overwhelm small controllers like Arduino Uno or Nano. Indeed, after the MicroSD support is added, Nano and Uno will have almost no memory available for anything else. We can use a controller with more memory such as the Mega or Teensy, however if we just record the serial data from the GPS Module to the MicroSD Card, we will have enough memory on the Arduino Nano, and we can process the data from the MicroSD later on another computer.

Step 2: Start Visuino, and select the Arduino Board type

To start programming the Arduino, you will need to have the Arduino IDE installed from here: http://www.arduino.cc/ .

First we need to add and connect MicroSD component in Visuino to control the MicroSD Module:

Step 4: In Visuino: Add and configure File element to the MicroSD Card component

To record the data we need to add File element to the MicroSD component and specify its file name:

Step 5: In Visuino: Connect the Serial Port to the File Element

Step 8: Connect the GPS Module to the Arduino

Step 9: Connect the Power Wires together, and plug the MicroSD Card in the module

Congratulations! You have completed the project.

Picture 1 and the Video show the connected and powered up project. The LED on Digital Pin 13 of the Arduino will start flashing from time to time when new data from the GPS is recorded to the MicroSD Card.

In Picture 2 you can see example of the data recorded on the MicroSD Card.

On Picture 3 you can see the complete Visuino diagram. Also attached is the Visuino project, that I created for this Tutorial. You can download and open it in Visuino: https://www.visuino.com.