An IoT device that can be put on any toothbrushes to track how well you’re brushing and augment your brushing routine through reinforcement.

Equip Any Toothbrush with Personalized Feedback from Google

Equip Any Toothbrush with Personalized Feedback from Google

An IoT device that can be put on any toothbrushes to track how well you’re brushing and augment your brushing routine through reinforcement. 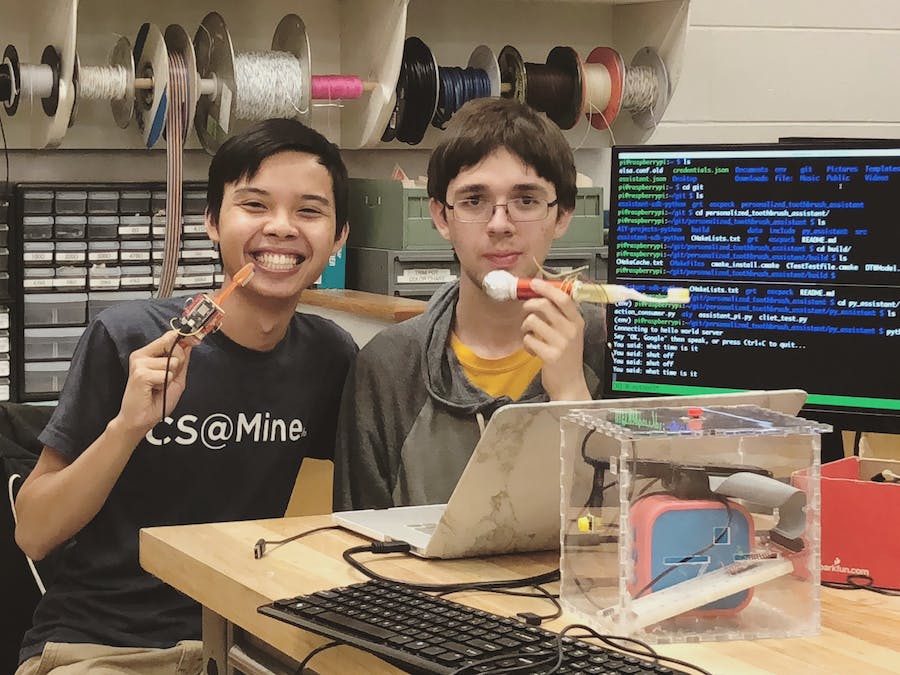 We made an IoT accessory that you can put on any toothbrushes to track how well you’re brushing and augment your daily brushing routine through reinforcement.

Our device interacts with the user through the Google Assistant API. Once prompted, the Google Assistant voice will prompt the user to begin brushing a certain region. Feedback is periodically given to make sure the user maintains proper speed and angle. After one region has been satisfactorily cleaned, the voice will prompt which region to address next. To encourage a consistent brushing regimen throughout a family, it keeps track of the quality of each brushing session. Consistent and masterful brushing will be rewarded in a point system that is tracked on a per-family basis. Instead of a mother needing to enforce a daily brushing regimen among her children, the siblings will compete amongst themselves to get the highest overall score. While the mother can reward the siblings for high scores and improvement, the points can also be redeemed for dental accessories. Amassing enough points can greatly reduce the cost of new toothbrushes, toothpaste, and floss. Proper dental care reported to dental services has the potential to reduce dental insurance costs, as it will overall reduce costs incurred for bi-yearly checkups.

This prototype consists of a Photon device, which can transmit sensor data wirelessly to the base (with Google Assistant built in). The Raspberry Pi in the base charges it, as well as classifies the sensor data to specific regions of the mouth, with accuracy and speed readings as well. Progress is analyzed by the base which communicates with the Google Assistant API to provide feedback.

We aim to continue improving our model accuracy and add a user-friendly front-end (e.g., mobile app, web) for users (e.g., family members) to track their progress! An Android and iOS app can be developed to visualize the regions of the mouth being prompted by the base, and can be used to monitor progress, provide statistics, and redeem points from the point system. If taken to fruition, it will be a valuable inclusion to the daily brushing routine in all households.

1 project • 0 followers
I am pursuing a BS+MS degree in Computer Science + Robotics. I enjoy asking the “What if” questions and taking the answers to action!
ContactContact
Thanks to Adam Frick.