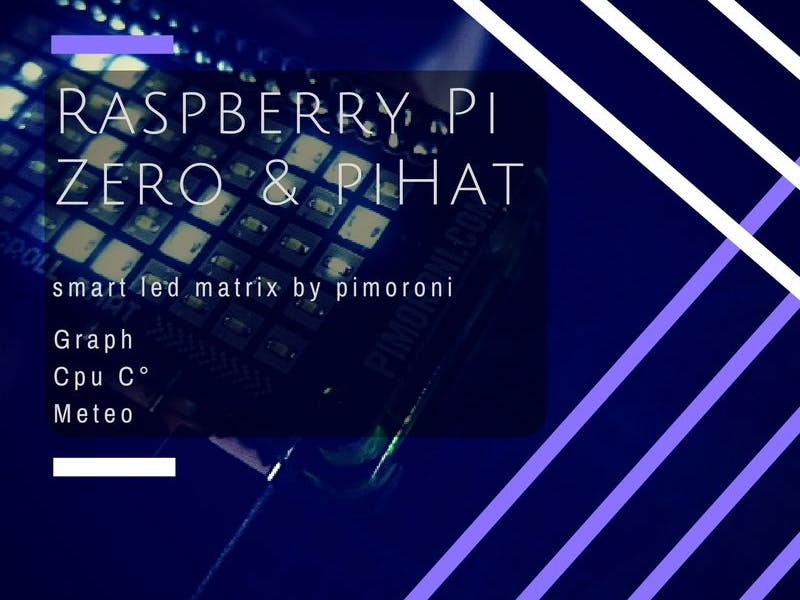 Raspberry Pi zero is a smallest version of Raspberry Pi. The Raspberry Pi is not a comestible kind, but is a Microcomputer. A single board computer that have CPU, RAM, HD, all connections like USB, HDMI etc.

I have also discovered a small led matrix 11x5 by Pimoroni, the pHat. This is a small and pretty led matrix that with this little pretty Raspberry Pi, the Raspberry Pi zero, make a very kindly object. A led scrolling led matrix, that you can program in Python.

I show you where to buy the Raspberry Pi, where buy the pHat, and how to install the library and the code for work with the pHat matrix.

On Amazon you can buy the

The Raspberry Pi Zero is available only on Pimoroni

After the soldering step, you can connect the pHat to your Raspberry Pi zero.

In the Terminal window, type:

Install the library on Python 3

Open a Terminal and type:

Install the library on Python 2

Open a Terminal and type:

Step 2: Connect the pHat and try the code

If you want use meteo file you must install the pyown library by terminal:

After you must provide a valid API key by using pyown library. The weather service you're going to use in this resource is called OpenWeatherMap. It's a completely free service, and has an easy-to-use API. You're going to need your own account though, so click on the link to go to the website: http://openweathermap.org

In the Terminal window, go to the same folder where are graph.py file, and type:

See other examples on GitHub

31 projects • 69 followers
Graduated in Psychology expert in new technologies and communication, with expertise in electronics, automation and home automation.
ContactContact