Multiple projects involving the use of Blockchain and IoT for Smart Road, Highway, Farm, Business, Retail and Residential Center Use Cases.

Multiple projects involving the use of Blockchain and IoT for Smart Road, Highway, Farm, Business, Retail and Residential Center Use Cases. 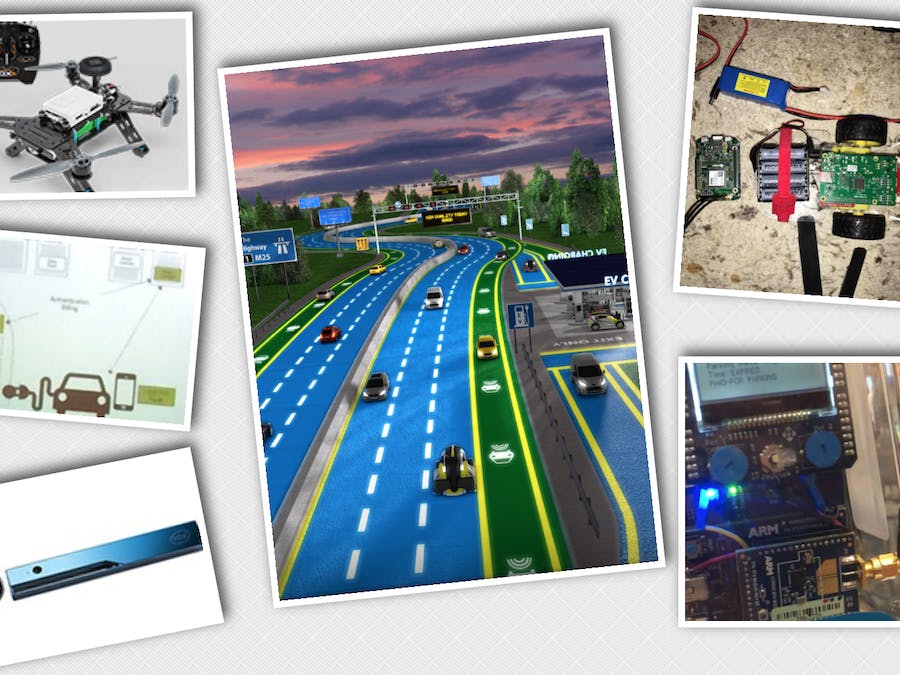 My projects can be categorized under different areas of IoT including automobile, cities, industrial, drones and robots.

In public spaces and residential areas, autonomous drones, driverless vehicles, air quality monitors, electric vehicles and electric vehicle charging stations will become pervasive in the near future. Also, internet of things can be enabled for grape crop monitoring at a winery or vineyard using a drone. Enterprises and consumers can benefit from solutions and systems that easily, autonomously and securely interact with shared ledgers, blockchains and smart contracts, other Internet of Things (IoT) connected devices, machine learning, cognitive artificial intelligence and advanced data analytics for monitoring, auditing and commerce in a sharing economy business.

The cognitive connected model vehicle consists of different components. The components include Arduino, Raspberry Pi 3, batteries, AT&T IoT Starter Kit that is made up of the mBed development board and Avnet Cellular Shield as well as a powerbank.

The Arduino controls the servo motor while the Raspberry Pi 3 sends the control commands to the Arduino through the GPIO pins. Different programs written in different languages (C, CSharp, NodeJS/Javascript, and Python) runs on the Pi.

The mBed development board host the binaries and programs for collecting sensor data from the onboard sensors and peripheral sensors before pushing data to the Pubnub service through the cellular shield. There are onboard accelerometer and magnetometer sensors on the development board. Also, there are temperature and humidity sensors on the cellular shield.

Sensor data is collected by the mBed board offloaded to the nearest base station or cell tower and AT&T Cellular Network through the antenna on the shield just like a smartphone or tablet. The data hitting the pubnub service is then forwarded to AT&T Flow and AT&T M2X time series available as services on the AT&T Cloud Environment.

Source code can be found here on my Github site. Pubnub is used to publish the sensor readings and subscribe to receiving instructions to set the LED. SettingsPubnub related settings are:

The sensor data collected is analyzed and enriched with data sources from other services. The autonomous model car is fitted with real sense cameras, proximity sensors and other relevant sensors for features like motion sensing, as well as decoupling of collision detection and avoidance, and self parking. It will be embedded with Intel Joule. This will replace the raspberry Pi for better performance. Using visual recognition software running locally on the device platform, the camera will sense the environment and image data is analyzed for collision detection and avoidance. For other circumstances, data can be offloaded to the cloud for cognitive analysis. The car will also be used for audio analysis of sounds from nearby environment and fault detection in a factory.

This project is based on the emerging consumer technology like the driverless vehicle. In the near future, an autonomous electric vehicle, like Tesla or Olli for example, will be able to travel from Los Angeles to San Francisco or California to New York. It may encounter speed bumps on the road, so there need to be some local cognitive processing instead of cloud processing for collision detection and avoidance. This is where a more powerful device platform like Intel Joule will become very useful for cognitive analysis on the edge. In addition, the vehicle will need to recharge the batteries. Therefore, it has to go to an Electric Vehicle charging station or somewhere in the residential area offering an electric vehicle charging service. This is where smart contracts and blockchains becomes very useful for the connected vehicle. Currently RFID card is used at the station but a mobile application wallet or in-vehicle system with smart contracts can be preconfigured to use the blockchain service accessible through the Electric Vehicle charging station.

It will be great for an an autonomous cognitive connected electric vehicle to analyze the sounds nearby, so it can have a better context of its environment. I intend to work on a real vehicle like Tesla or an autonomous electric bus based on the results of this experiment.

The cognitive aerial drone is being integrated with shared ledgers, smart contracts, blockchain and cognitive services for inspection and surveillance.

Drone for Inspection: Drone is used for inspection of pipelines, roofs, telecommunication masts, oil and gas production facilities, wind turbines, etc, for presence of corrosion, bird nests, and so on. Blockchain is used as a proof of audit eliminating paper trails. Cognitive service and image/visual recognition APIs is used to analyze the drone video and pictures.

Drone for Surveillance: The drone is also used for surveillance. With LTE, image data and other data captured by the drone need not be stored and downloaded when the drone lands, the data is sent in real-time. The drone will hover a farm or vineyard and relay real-time data to manage crops using the AT&T IoT Starter Kit, Pubnub service, AT&T Flow and AT&T M2X.

The following includes but not limited to the parameters to be measured for the drone:

Each of homeowner's or business rooftops, telecommunication masts, wind turbines is treated as an asset with an Asset Identification number. Data will therefore be stored in a system of records or a system for asset management. Based on the data stored, people of interests can be notified, work orders can be generated for repairs or maintenance. It will bring about a fully automated process for inspection or audit as well as maintenance.

Like the autonomous model car, the cognitive aerial drone will be fitted with real sense cameras, proximity sensors and other relevant sensors for features like motion sensing, as well as decoupling of collision detection and avoidance. It will be embedded with Intel Joule.

Another solution currently being built is the Electric Vehicle (EV) Charging Meter that is integrated with the Blockchain service. Electric Vehicles or their owners authenticate themselves via a Smart Contract at the charging pole. The charging pole switches turns on the power and starts the charging process. Billing is done automatically via the use of different methods of payment including a chosen payment preconfigured to use the smart contract.

The Blockchain offers an affordable and seamless way to establish a global charging infrastructure for both EV charging providers and consumers or residences. Wireless Charging of driverless electric vehicle at the EV charging station or charging pole can be implemented. Another means for charging the autonomous car is to use systems similar to aerial refueling systems like the flying boom or probe-and-drogue systems.

Car owners authenticate themselves via a Smart Contract at the parking meter using a mobile application. The parking meter switches turns on the power and starts the billing process. Billing is done automatically via the use of different methods of payment including a chosen payment preconfigured to use the smart contract.

Improving air quality is another work in progress. It uses sensors to track and measure harmful substances in indoor and outdoor environment. The collected data is pushed to the pubnub service through the AT&T ISK. Data is analyzed using the AT&T Flow in combination with other services. The results of the analysis can be viewed on road signs and mobile applications.