Wearable wrist band which tracks and monitors the human body by getting specified data. The data is analysed to find the state of a person.

Wearable wrist band which tracks and monitors the human body by getting specified data. The data is analysed to find the state of a person. 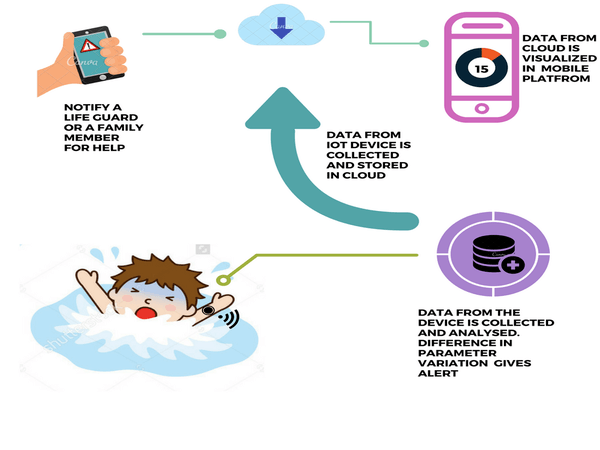 Two different ideas for this project which are:

This device gathers data. The data is analyzed, and when data reaches above the specified threshold, a notification is sent to the lifeguard or family member that the swimmer is in trouble.

Each piece of hardware has specified tasks which are given below.

Collects data using LEDs and photodiode. The collected data which is in analog form is converted into digital form and stored in internal registers. AFE404 supports i2c communication so the stored data is accessed using the i2c protocol.

AFE4404 is capable of collecting data such as:

The work of the iot device here is to collect data from AFE4404 and compare data with the threshold value. When it reaches above to the specified value, it gives an alert to take action.

And data collected from this device is transmitted to cloud, which is used to visualize data from another device.

When he/she is panicked due to drowning situation. The device gives an alert signal which is transmitted to cloud and to lifeguard, then the alarm is raised to get help, the device also contains an emergency button which can also be used to notify the lifeguard for help. And another important thing about the device is that it doesn't have any display, which reduces cost as well as power consumption. The role of display is carried out by RGB LED. The RGB LED indicates the state of the heart rate in blink frequency and color (ex: for a normal heart rate, the LED blinks with one second time delay in green color, but if the heart rate is raised higher than normal, then it will blink with 0.5 sec delay in yellow color, and likewise it goes on to specify the heart rate). The swimmer is also alerted with this functionality.

This device is similar to the first one with some additional hardware, which is the GPS. GPS is used to spot the exact location of the swimmer by tracking the co-ordinates of the swimmer so it is easy for the lifeguard to help the swimmer.

Apart from lifeguard, we need another solution which should be faster than the lifeguard. Now-a-days, drone technology is improving very fast. So we can use a drone to track the swimmer's location using GPS co-ordinates and throw inflated tubes or a self-inflating life jacket to prevent the swimmer from drowning.