This article is dedicated to cross-compiling and deploying the PJSIP/PJSUA2 libraries to an ARM embedded system.

This article is dedicated to cross-compiling and deploying the PJSIP/PJSUA2 libraries to an ARM embedded system. 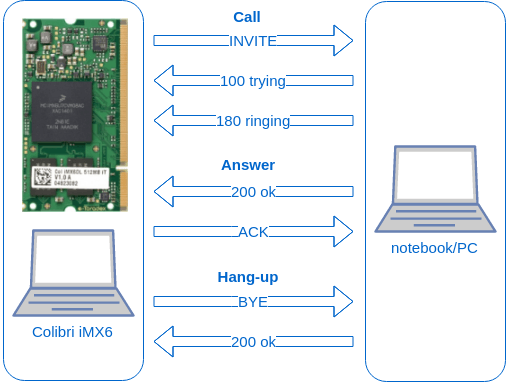 This article’s main goals are: to cross-compile the PJSIP libraries and the PJSUA API reference implementation; deploy it to the target system; give an overview about the SIP protocol; and explore the reference implementation features, regarding audio only. For this purpose, a Computer on Module (CoM) from Toradex was chosen in the following configuration: Colibri iMX6DL* + Colibri Evaluation Board. The evaluation board and CoM are displayed in Figures 1 and 2, respectively.

VOIP or Voice over IP, is a term designed to refer to a set of methods and technologies targeted for the implementation of telephony services over the Internet. For the purpose of this article, the scope will be limited to the use of a reference implementation built upon the SIP communication handling protocol by means of the PJSIP libraries and PJSUA2 API. If you wish to gather more information about VOIP itself, there is a website that labels itself “A reference guide to all things VOIP” and it holds comprehensive information on the matter.

SIP is the Session Initiation Protocol – a protocol used for signaling and handling communication sessions. This protocol is sometimes referred to as the de facto standard for VOIP implementations. It is an IETF (Internet Engineering Task Force) standard even though there are other options to SIP, such as IAX2. SIP employs the RTP protocol for data transmission which itself is encapsulated in TCP or UDP and can be encrypted by using TLS.

PJSIP is a set of libraries that implements the SIP and related protocols such as RTP and STUN, among others in C language. Some of its advantages are that it is free, open source, and highly portable. It was started in 2005 and is still being maintained and improved with wide documentation and the advantage of having a high level API named PJSUA2 for easily building custom applications. The PJSUA2 even has an online book for its official documentation.

The first step to cross-compile the PJSIP libraries and the test/sample application is to have the toolchain set. To do it, we can follow the toolchain for hard float calling convention section of this article. Note that if you are willing to use your own cross-compilation toolchain, according to this PJSIP documentation, you are required to have the following GNU tools: GNU make (other make will not work), GNU binutils, and GNU gcc for the target.

If the basic rootfs provided by Linaro doesn’t have some ALSA headers and the library needed to compile PJSIP, we will download and compile these libraries from the ALSA project website. In this article, the alsa-lib version downloaded was 1.1.1. then we will install the headers and library to the Linaro rootfs.

Before compiling the ALSA lib source codes, it is necessary to run the autoconf script with the CFLAGS, LDFLAGS andprefix variables pointing to the rootfs from the Linaro toolchain:

Then just build and install. After the make command, the compilation will fail at some point; but it doesn’t matter because the headers and library we need will have been compiled.

Having the toolchain configured, it is time to download and extract the PJSIP source codes to the host machine and then go into the directory that holds the unpacked content. At the time this article was written, PJSIP version was 2.5.1.

Before compiling the PJSIP source codes, it is necessary to run the autoconf script pointing to the previously modified rootfs from the Linaro toolchain. It is almost the same way we did to compile the ALSA libraries, except for the fact that the directory where we want the compiled libraries to be installed is a directory we will compress and deploy to the target machine.

Then we are able to compile the libraries and also copy the reference implementation executable to the installation folder:

The next steps are to compress the folder and copy it to the Colibri iMX6. To discover the iMX6 IP, you can issue the ifconfig command:

Now, we have the PJSIP deployed to the target – although it isn’t necessary for our next steps, since we will be using a binary only, you may find it useful somehow while developing applications of your own. We are also ready to start using the reference implementation, but first, let’s check some other things.

The PJSIP library uses ALSA (Advanced Linux Sound Architecture) resources, which is also the audio subsystem used by the Toradex embedded system BSPs. Before starting, make sure you plug a headphone/speakers and a microphone into the carrier board with the system powered-off, as illustrated in the Figure 3.

Then you can use the alsamixer application to adjust the audio options according to your system.

The configuration used is illustrated in the Figure 4 and you should notice that adjusting the microphone’s amplification too loud can cause distortion, thus, it is good to experiment with the settings. Even adjusting the mic option to zero won’t mute your microphone; it just means there will be no amplification, or in other words 0dB gain. Another important point to notice is that if you force power-off the system, the configurations you made might be lost, therefore reboot or shutdown from the command line the first time you make your changes.

To test the audio input (microphone) and, subsequently the output (headphones/speakers), we will record some audio by using the arecord command and then play it by using the aplay command. Notice that for the arecord there are some options that we need to set: -V displays a VU meter so you have visual feedback whether your mic configuration is good or not; mono is passed since microphone is mono; -r is the sampling rate; -f is the format and -d is the duration in seconds. For more information regarding arecord, you can use the –help option, or if you want to know more about audio on the Colibri iMX6, you can go to the Toradex developer related page.

If you can hear yourself well, we are ready to go ahead. Otherwise, check the connectors and the audio configuration.

The protocol has methods defined in its RFC and method extensions defined in other RFCs. A few of them are:

There are also response codes, each with a specific meaning, that consist of 3 digit values:

It is important to notice that the SIP protocol doesn’t carry the audio information. Instead, it uses the RTP protocol encoded usually in UDP or TCP transport. For a better understanding, the Figure 5 explains how the transaction between two user agents is done for a simple call.

Figure 5: Example of a simple SIP call between user agents

To make calls, a SIP URI is needed. It is a form of identifying a communication resource. A complete SIP URI has the format sip:user:password@host:port;uri-parameters?headers, but there are systems which can operate even with a SIP URI that provides only the host.

The PJSUA API reference implementation is a command-line based application which uses the PJSIP, PJMEDIA, and PJNATH libraries and implements a user agent, also known as softphone. Its source-code can be found here and is a useful starting point to developing your own solution. The full documentation regarding the use of the PJSUA application can be found here.

Before starting to test, find the IP address for both your embedded system and your PC/notebook. You must have both of them in the same LAN, because we are not worried about using a proxy server or anything like that, therefore our connection between devices will be made point-to-point.

In this article, we will assume IP address 192.168.10.5 for the Colibri iMX6 and 192.168.10.1 for the PC. You also must have softphone software installed in your PC – it can even be the same reference application, if you want to compile it for your machine – this article will use the Linphone open-source softphone for Ubuntu 14.04 LTS. To start PJSUA in the embedded system use the following command. The PJSUA command line interface that you are expected to see is described in the Figure 6.

In order to send instant messages, type “i”, the SIP URI of the destination and the message, almost like the way we did to start a call. In your PC softphone, you should see the message. Try to send some message to the iMX6 by using the GUI. The Figure 9 displays the Linphone messaging interface with some messages exchanged between devices, while Figure 10 illustrates a message received by the Colibri iMX6 embedded system.

In this subsection, some of the options for the PJSUA command-line application will be presented. They can be found here. Firstly, create a file named .pjsua-conf in the embedded system with the following contents:

The stereo configuration lets the audio output to be played on both the headphone’s speakers, while omitting it just makes the application to output the sound to only one of them. The auto-answer option lets you configure an answer code for incoming calls – in this case, the answer is 200, which means the call is accepted – and this can be useful in situations where the embedded system endpoint doesn’t has a human interface. Duration sets a maximum call duration in seconds, and this may be useful in applications such as debugging purposes. Color makes some log messages such as warnings and errors be colored, which helps identifying specific situations. Lastly, the add-buddy option lets you add SIP URIs so that you don’t have to add them manually every time you restart the application neither do you have to type the URI every time you want to make a call to the corresponding buddy (you may specify this option more than once for multiple buddies).

Passing the configuration file to the application:

Among the various options available, there are two that are nice for testing purposes: rx-drop-pct=PCT and tx-drop-pct=PCT. They both simulate packet loss by adjusting its percentage (PCT). It was tested with a package loss for both Rx and Tx of 10%, 20% and 30%, respectively, while monitoring the call quality average displayed by Linphone, which ranges from 0 to 5. The quality went from almost 5.0 without loss to 3.3, 2.3, and 0.6, respectively. Figure 11 shows the Linphone screen capture for the last situation (30% loss).

There you go! Now you have a VOIP implementation for the Colibri iMX6 running and a starting point to develop your own application according to your needs. Some additional information will be presented in the next chapter: network monitoring in order to see the SIP packets and some transactions being made.

In order to see the SIP transactions being made between devices, the Wireshark software will be employed. You must notice that there is a third IP address 192.168.0.20 in the transactions and that is because the notebook was used as a DHCP server for the iMX6. Therefore, the notebook has two IP addresses. Still, no further investigation on why or how the SIP application is accessing the second IP address.

The sequence of operations made while capturing the network is described below:

The Figure 12 displays only the SIP protocol packets exchanged during the capture, with the highlighted lines corresponding to the start of the situations described above. Hence, 10 lines are highlighted. Notice that there is a SUBSCRIBE/NOTIFY handshake a moment before the third operation listed above.

Figure 13: Network monitoring for SIP and RTP packets for a brief call

This is the end of the article that goes through implementing the PJSUA console-based application on a Toradex Colibri iMX6 and Evaluation Board running embedded Linux. Thank you for reading and I hope it was a useful article! * for T20 based modules, mfpu=neon could generate incompatible binaries.