The aim of this project is to process LiDAR and camera data on Zybo Z7-20 to detect objects with usage of data fusion.

The aim of this project is to process LiDAR and camera data on Zybo Z7-20 to detect objects with usage of data fusion. 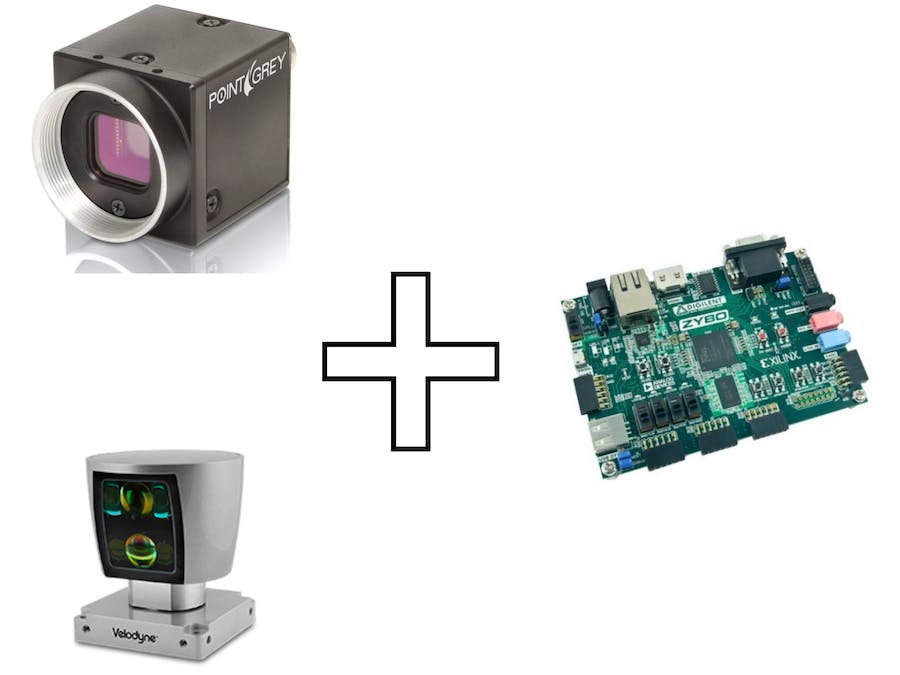 In this field, one of the most important things people devote their time for is object detection. A car, which is supposed to drive by itself, must know what objects are in its surround. There are three sensors which are most commonly used for such purposes. It is LiDAR (Light Detection and Ranging), RADAR (Radio Detection and Ranging) and camera. Data from this sensors must be acquired and properly processed to detect objects. Very common approach is to fuse data from a number of these sensors. It gives higher reliability of system output information.

Often, when algorithm detects object efficiently, it is also time consuming. However there is very little trials to implement such algorithms on heterogeneous platforms. In our project, we want to show that it can be done and it can bring visible profits.

The aim of this project is to implement a hardware-software car detection system based on LiDAR and camera data fusion. The target platform is Zybo Z7-20.

The first step was decision how should we detect cars. We searched for sufficient literature - articles, conference papers, etc. After evaluation (in MATLAB) and analysis of algorithms we have chosen the one presented on figures 1 and 2.

The next step was about creating reference model. The basis was evaluation version from step 1. We have changed it so that it could nicely fit in FPGA architecture with taking into account the manner how data comes from LiDAR.

The most important things we have altered:

Step 3: Division of algorithm on hardware and software part

The heart of Zybo Z7-20 is heterogenous Zynq-7000, which contains programmable logic (PL) and ARM processor (PS). We took advantage of it and we moved to PS these parts of algorithm, which have more sequential "nature". The diagram below (figure 3) shows scheme of algorithm with its division into PS and PL part.

However, not everything works:

This step is about implementation of PS part of the algorithm. It is being done in Vivado SDK using C++ language. Currently, only PL/PS communication issues are being prepared. For now, software part is being developed independently with hardware part.

What is to be done

Our TODOs are listed below:

We give a summary of the project in a form of video below.

How to run the code?

Git repository with most recent code is attached to the project. It requires at least ver. 2018.2 of Vivado. User should choose folder with part of the project he wants to investigate. Current version provides only possibility of behavioral simulation.