Small four wheeled bots are fun to build and play with, but offer a new set of challenges for the beginner. With the addition of two more...

Small four wheeled bots are fun to build and play with, but offer a new set of challenges for the beginner. With the addition of two more... 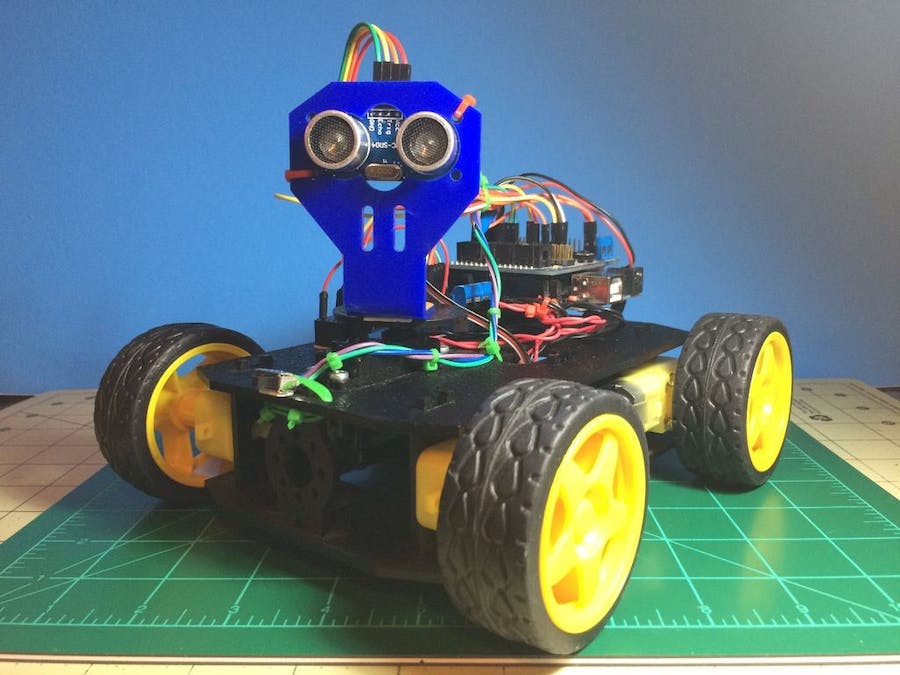 Small four wheeled bots are fun to build and play with, but offer a new set of challenges for the beginner. With the addition of two more motors, you add several problems, one being more power is needed to drive the extra motors. This can mean more or larger batteries or at the very least, better ones. Next, your motor controller choice is more important. You don't want a power thieving h-bridge taking any more power than it really needs to. That being said, you don't want one that can't supply the current needed for all the motors either. In this article, I will try an address all these issues with a 4wd Rover named JR-001.

JR-001 is a simple rover with two modes controlled via a slide switch. Mode one is just the usual obstacle seek-and avoid. Mode two is a keep-away type mode or what I call "Force". With this mode, the bot moves forward and if you place your hand in front of the sensor it will reverse and turn in a curve as it moves backwards. With it, you can pretend you are a Jedi with the force on your side, pushing the bot back!

The two modes will help to serve as ways to demonstrate simple methods to control what your bot does internally and externally to code. I will say that my main goal here is help you get a small 4wd bot going with little worries.

What I will cover in building this robot:

Parts you will need are as follows:

You can source many of the parts from eBay or other suppliers directly like Sparkfun, RobotShop and ServoCity.

After you have purchased, collected and downloaded everything thing you're ready to start with the build!!!

First assemble chassis following the instructions included with the chassis or video. After finishing you should have something like the image.

NOTE: Before going any further, please remove all 4 wheels, so as not to damage the motors whilst putting the other bot components on.

Take the standard size servo and place it on the chassis as pictured. You will fasten the servo in with the .5" 6/32 or M3 screws and nuts. The servo spine will be facing the rear of the robot. Now place the largest servo horn you have on the servo and secure it done with the screw included with the servo. Next using double sided tape, zip-ties, place the HC-SR04 holder on the horn as pictured. It will be fully secured later.

Next place the microcontroller into the clip holder or onto your screw mounts (if you are using another type chassis). Then place the L9110S on the chassis with a standoff or double sided tape as pictured. Place the small or mini breadboard on the chassis next to the servo and motor driver.

After you're done with that it should look something like the picture.

Now with the robots front facing AWAY from you, take the wires on the LEFT side and -

Take the wires on the RIGHT side and -

Now connect the servo wire to pin line 4 on the sensor shield. The white or orange wire is always the signal wire.

NOTE: You will need solder and a soldering iron for this step.

Take three of the Female to Female jumper wires and remove the connector from one end of each wire. Strip back the wires about 3mm long (@1/8th of an inch) and tin them with solder and a soldering iron. Then tin the three terminals on the switch as well. Now solder a wire to each terminal on the switch. See the picture for more details.

After the wires have been soldered on -

At this point you can attach the wheels and secure the HC-SR04 holder onto the servo horn.

Step 9: Getting power to the bot

Optional - Connect the VCC wire (red) and the GND wire (black) of the volt meter to the respective battery wire; POS to POS, NEG to NEG

With the wiring checked and rechecked, It's time to load the code. Follow the instructions on the Arduino site on how to install the Arduino IDE.

After the IDE is installed, you can next install the L9110 Motor Driver library. Do this by downloading the zip file included in STEP 1 named L9110Driver.zip and extracting it to your Arduino libraries folder or by following these instructions on how to add a library.

Now that the IDE and Motor driver library have been installed, load the robot code into the Arduino IDE from the zip file found in STEP 1 named multimode.zip.

Connect your PC and Arduino up with the USB cable. Now choose the board from the Tools->Board menu in the IDE, Uno for this project (choose the board you have if different from Uno) Now from Tools->Port menu, pick your com port. After this is done, click the upload button. If all went well, the code was loaded, if not see here for help on the IDE and related issues.

As I said before, this is a simple robot to demonstrate how to more easily construct a 4wd chassis. The kit used is well made and gives you a lot of room to grow and experiment on.

I want to give the budding builder a good starting point for a 4wd bot, and cover issues that come along with it being 4wd.

Here we will cover some of the more interesting aspects of the code.

Handling of the mode Switch:

Mechanical switches like push buttons and toggle switches are very nice and convenient to use with a micro controller, but have a big problem... They generate a lot of electrical noise when switched or pressed (See the picture for details). This "noise" wreaks havoc with your code to read a button or switch and can cause the code to mis-read a change in the switch state. To remedy this, we add some logic to "debounce" the switch.

A debounce is just a little extra code to keep track of the last time a change in the switch state happened. When the switch is toggled or switched, the function that reads the digital pin for it, saves the time the change occurred. When another change is noted, that saved time is checked to see if it's out of range of the new time. If the new change is less than 20ms from the last one, the change is ignored and assumed to be noise. If it was greater than 20ms, then the change is taken and a new change time is saved. This keeps the code from getting multiple changes per switch flip.

Early on I stated one of the issues with a 4wd robot is motor traction. This is counter-intuitive when you first think about it. 4wd cars and trucks have a lot better traction and power distribution than a 2wd vehicle. This is true, but in the robot's case there is a motor on EACH wheel and they are not completely matched in speed and power as they turn on. It's kind of like flooring a car in sandy or wet conditions and skidding out. This causes the bot to skid a bit and not gain traction on some surfaces. This is noticed a lot in turning on a 4 wheel vs. a 2 wheel chassis, where traction and power is lost a lot.

To help with this (but not totally eliminate it) , I have a function that each motor movement function calls. This function "ramps" up the motor(s) to the speed given by doing a divide of the speed by 4 and looping 4 times adding the quotient of the division by 4 to each step in the loop. This allows for a slow build up of the set speed and gives better traction, tracking (some-what) and reduces wear-and-tear on the gear motors.

With this method, you could do the same thing in reverse for ramping down to stops. Ramping also helps on other gear motors, not just the ones like this bot has. I highly recommend using this on larger bots as well.

For this robot, the two extra motors per side does add to the power (amps) pull from the batteries and also adds stress on the motor driver as well. To help the bot along, you want to choose a driver that will not die if all the motors are stalled (STOPPED) and one that will not drop a lot of voltage as it powers the motors.

For the motors on the Actobotics Junior as well as many other small bots, the L9110s driver will work out nicely. It has a continuous power output of around the maximum of the gear motors used on this bot. This motor driver is also VERY inexpensive and easy to drive from code, and with a minimum amount of pins used on the micro controller. For this project, they are the best value I think, though there are other options you can choose from like the TB6612FNG driver as well as others (please NOT the L293 or L298!). 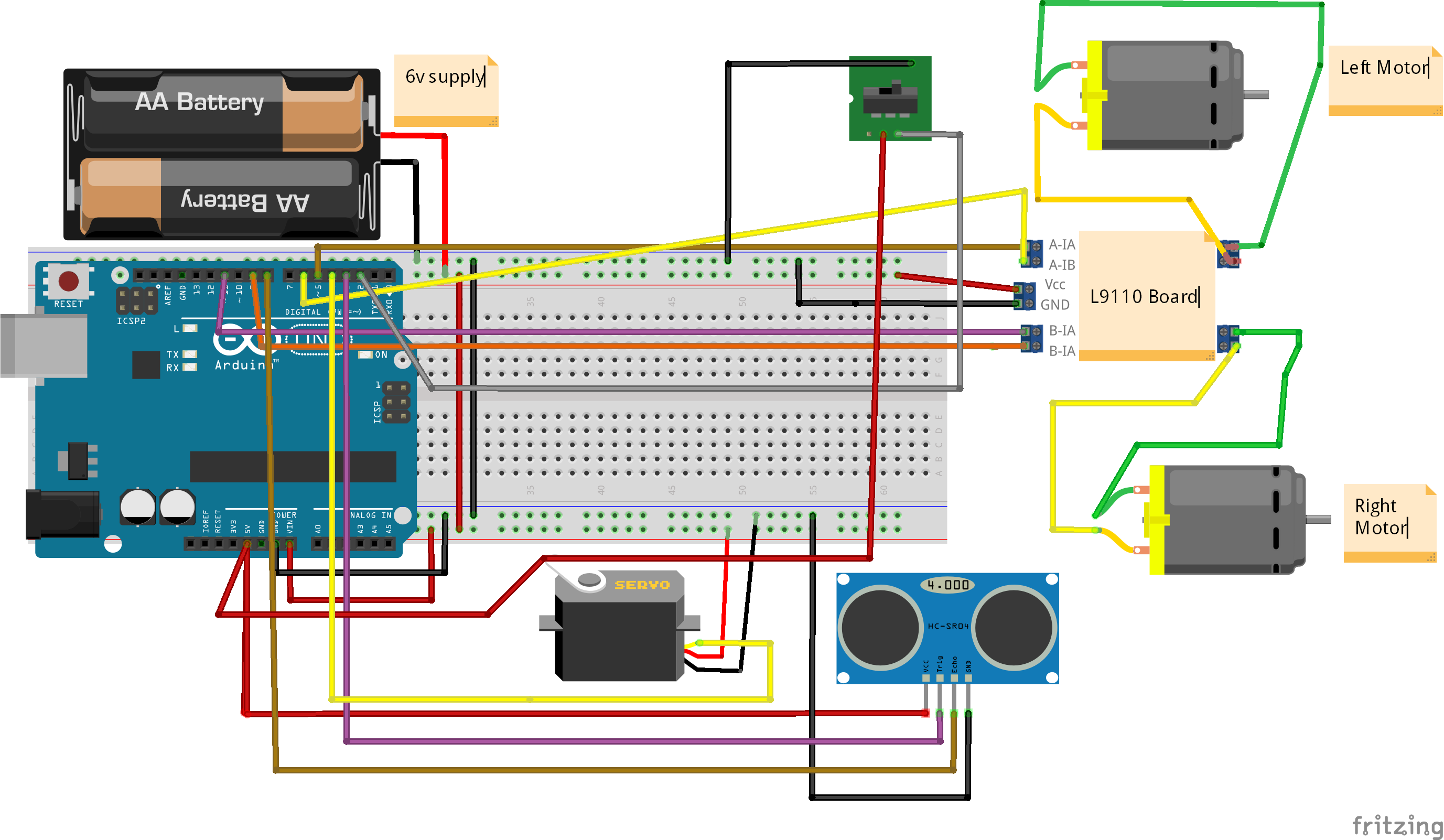