Remote controlled Boom and gripper bot. Control via Phone or a Python GUI.

Remote controlled Boom and gripper bot. Control via Phone or a Python GUI. 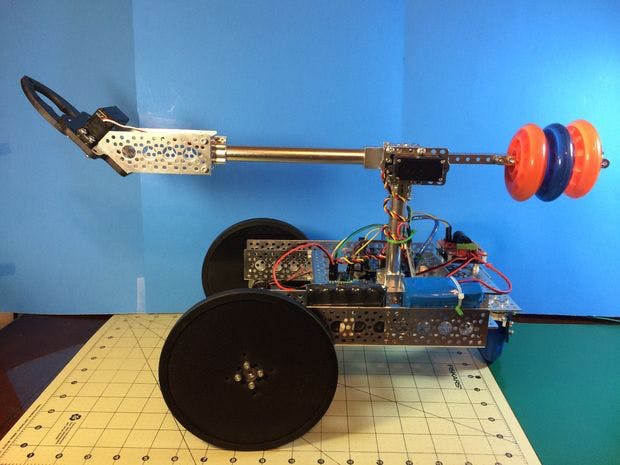 Robotic grippers have always been fun things to play with. Adding one to a robot is like having a remote control Tonka toy from my childhood. In the past, grippers where a major deal to build and construct, but with 3d printers, CNC cutters and a wide variety of premade gripper kits, it makes it very easy to add one to your project now.

I wanted to make a simple bot with a gripper I could easily control from a computer or a phone app. It had to be wireless, agile and easy for me to make and change to get weight balancing under control. For this bot I used some of my Actobotics parts for the build. They made making the bot easy and I could make changes as the build progressed.

This bot uses the Actobotics channel and brackets for the main chassis, 6" ABS drive wheels (though 5" wheels would work just as well) a 2.9" skate wheel for the rear castor and an ABS gripper kit from ServoCity.

For the electronics; An uno clone for function control, a RoboClaw for the drive motors and a Serial servo controller from Pololu. A complete list of parts can be found in the next step.

You can source many of the parts from eBay or other suppliers directly like Sparkfun, RobotShop and ServoCity.

After you have purchased, collected and downloaded everything thing you're ready to start with the build.

Assemble the Wheel bracket B per the ServoCity site info.

Assemble the gripper following the instructions provided in this video. After finishing you should have something like the image.


For this step you will need the following:

NOTE: When I say the LEFT side of the bot I'm talking about the left side with the REAR of the bot facing you.

Follow the pictures as a guide for mounting the electronic boards. Keep in mind the length of the jumper wires you have for maximum distances from each board.

Place the batteries and power bank near the board it will power in one of the side 9" channels.

NOTE: When I say the LEFT side of the bot I'm talking about the left side with the REAR of the bot facing you.

NOTE: Later you may have to switch the RED and black wires around if the bot is not going in the correct direction once you power it on for testing and use.

Run the servo wires in a neat and tidy fashion to the Pololu servo controller. The gripper servo wire can be run through the 6" boom tube. You will need to use 3 jumper wires for it to be long enough to make it to the controller. For the boom servo wire, just wrap it around the 4" boom tube.

See the pictures for more details.

NOTE: to program the UNO, you will need to leave the 5V line disconnected from the Bluetooth adaptor until done.

NOTE: make sure the 5v line to the Bluetooth adaptor is not connected during this step.

With the wiring checked and rechecked, It's time to load the code. Follow the instructions on the Arduino site on how to install the Arduino IDE.

Now that the IDE and Motor driver library have been installed, load the robot code into the Arduino IDE from the zip file found in STEP 1 named boombot_roboclaw.ino.zip. These files are also included in this step as well.

Connect your PC and Arduino up with the USB cable. Now choose the board from the Tools->Board menu in the IDE, Uno for this project (choose the board you have if different from Uno) Now from Tools->Port menu, pick your com port. After this is done, click the upload button. If all went well, the code was loaded, if not see here for help on the IDE and related issues.

NOTE: Reconnect the 5v line from the UNO to the Bluetooth adaptor.

Step 12: Controlling the bot from the Python control application

To run the Python remote control application, download the zip file from this step and extract it to the location you want to run it from. Next, open a command shell (i.e. terminal, cmd.exe, etc...) and navigate to the directory you extracted the file to. Now type: python rover.py from the command line and a window looking like the one in the image should pop up. If not, look for any python errors and correct (i.e. missing libraries etc...) The Python site may help some if needed.

Once the App is running, you should be ready go.

Now, power on the bot. Then type the comm port of your adaptor and click the "Connect" button. After a few seconds you should see the other controls enabled and the connect button disabled. This means you are connected to the robot. If you can't connect to the bluetooth adaptor, you will have to use the magic of Google to help you out!

The control application is simple to use and allows for mouse or keyboard controls.

The keyboard controls are:

Forward and Reverse commands are constant i.e. they keep the bot moving after execution until a new direction is sent or a Halt command.

The turns 90 and 45 degrees are temporary i.e. After some delay, they stop the bot from moving.

The gripper sliders automatically set the gripper on the bot. After you release the slider, the execution of the set is sent to the bot.

Use the "Disconnect" button to stop using the program. This will send commands to stop the bot and home the gripper.

Step 13: Controlling the bot from an Android phone/tablet

To crontrol the bot with an Android phone or tablet, install the application Robot Bluetooth Control to your device.

Once installed, you will have to pair your bot with the Android device you are using. After that is completed, open the Robot control app and add the key definitions like the images included here shows.