Want to track your child's driving habits? Want to alert them as to their speed or excessive speed? Sony's Spresense can support you!

Want to track your child's driving habits? Want to alert them as to their speed or excessive speed? Sony's Spresense can support you! 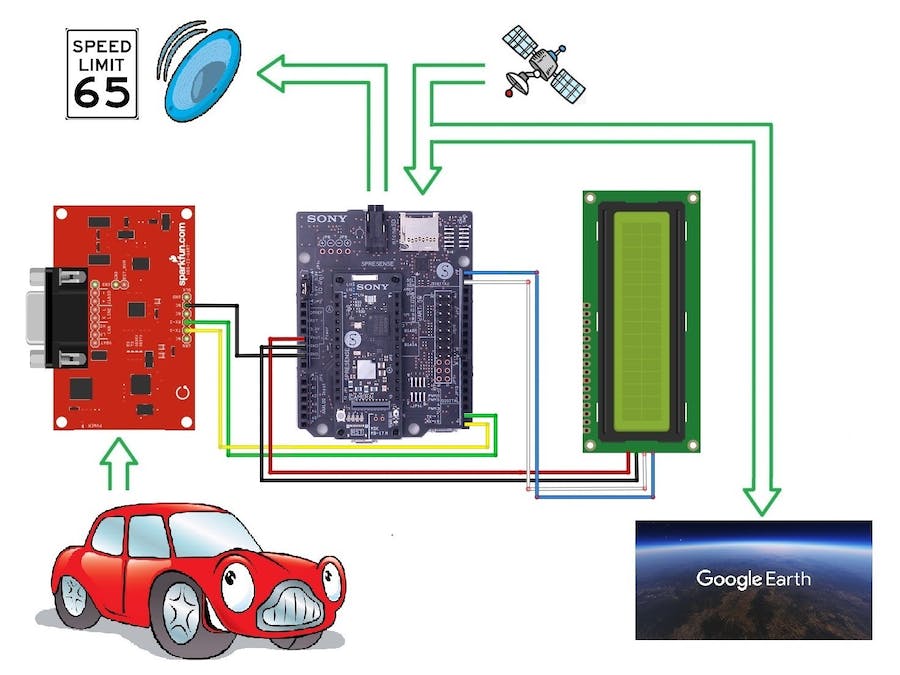 As a new product on the market, the Sony's Spresense board provides significant Arduino compatibility with some key built-in capabilities. In order to check Arduino compatibility and leverage some of these capabilities, the following project was put together leveraging an onboard GPS/GNSS, SD card, and audio interfacing. This might be called the "driver habit project" and is intended to inspire and guide you on Spresense integration with a capability for which you might find your own variation and use.

Like all projects of this kind, you may encounter issues relative to hardware or software component variations for which you may need to investigate further to resolve.

Basics of the Project

To make use of the key features of the Spresense, I decided to focus on monitoring and alerting on driver habits. The best way to do this is through an OBD-II connection on vehicles built after 1996. OBD-II is an industry standard for supporting vehicle operations and diagnostics, however globally there are variations in the interface that may need to be adjusted.

WARNING: Since this project is designed to interface with a vehicle and be operational while driving, it should NOT be viewed, touched, or adjusted during a vehicles movement. The design is intended to be engage before, and disengaged after the vehicle is properly parked.

This is a walkthrough of the project and not a packaged solution with all outlined details. Everything is provided or referenced in the article for replication, however it does require some sophistication to pull it together and work through any variation issues possibly encountered. Later, further consideration can be given to better integration, easier activation, packaging, power sourcing, etc. In addition, variations of vehicle capabilities may require additional thought, or customization.

This article will seperate out the basics of OBD integration and readings, from the specific capabilities from Sony's Spresense.

The OBD integration consists of the Sony Spresense board, a SparkFun OBD-II-UART interface board, and a HD44780 2x16 LCD panel with I2C backplate. The functionality presented in this basic version interfaces with the vehicle, receiving Speed and RPMs, and displaying them on the LCD panel.

The Sprenense functionality is provided in four parts: 1) Record vehicle location using GPS coordinated from the on board GNSS receiver, 2) Logs event history (KML files) for visual overlay on Google Earth using on board SD card, 3) Provide audible speed reference from 25-125km/h using the stereo headphone 3.5mm 8Ω audio jack and 4) making use of the 4 main board LEDs as status indicators.

Although, the wiring for an Arduino UNO is listed for reference, wire according to the Spresense guide. Variations with the UNO are called out for additional understanding.

An UNO wiring will require the use of a SoftwareSerial library as the UART pins D0/D1 are shared with the Arduino IDE and cause conflicts. As the Spresense is enhanced with two separate UARTs, the limitations requiring SoftwareSerial library is removed. For the Spresense, D0/D1 can be used for TX/RX which tied to UART2, and the IDE Monitor is tied only to the USB port, which is UART1.

The Spresense has multiple I2Cs built in. IC0 is configured with use for pins D14/D15 on the main or extension board. On the UNO analog A4/A5 pins are used to support I2C connections. The wiring for both is as follows:

Below are references for both the Arduino UNO, and Sony's Spresense wiring

With the wiring complete, the basics are done and only two parts remain; downloading and applying the attached code, and connecting the OBD-II UART interface to the vehicle. However before we jump to fast, there is more to learn. To start let me cover a bit about the wired integration with the OBD-II and LCD boards.

The interface with the OBD-II breakout board is simple serial communication. There are two parts to the functional dialog which include first, establishing the connection and dialog language to the vehicle. Then second, polling the vehicle for information. These two aspects are based in key standards referred to as follows:

Aside from just a wired serial dialog, the communication protocol/language needs to be understood. The ELM327 manages connection between vehicle OBD-II interface and the serial interface through the use of the Hayes command set or "AT" commands. Further general information can be located at this link and examples are as follows:

The next layer of communication is with the using the CAN transceiver to pass PID codes, or parameter IDs; these codes are used to request vehicle information. This follows an SAE industry standard J/1979 which defines many standard PIDs. However, manufacturers also define additional PIDs to support specific vehicle characteristics. Example use is as follows:

The OBD-II UART board uses a DB9 to OBD-II connector. The vehicle interface is typically under the driver's side dash. In some makes it can be on the passenger side.

Typical OBD-II connector on a located under the driver side

Exchanging vehicle information is supplied with the OBD-II board. However, you will need to do something with the data. This is where the LCD panel is helpful. Using the panel, has been made quite easy using the LiquidCrystal_I2C library, and it supports many other LCD panels with the I2C backplate. Below are some basic settings and functions used to support and operate the LCD panel

To avoid some issues with readability, it is advisable to delay operations for about 50 milliseconds between some operational commands.

When using the board you may have to adjust the rheostat on the backplate to adjust the contrast to see the output. This adjustment will allow you also to see black on white, or white on black lettering

Although the attached code is written for the entire solution, this is a break point for you to consider parring down the code to check the fundamental integration from vehicle to OBD-II interface, to the Spresense, and then out to LCD for reading review.

If assured by testing, or confident to continue, then read on.

Aside from minor variations between UNO and Spresense wiring, both platform capabilities exist as noted in the above sections and are rather basic. From this point forward, only Sony's Spresense offer the onboard integrated capabilities, thus leaving the UNO behind.

The enhanced functionality is incorporated in four parts; 1) Record vehicle location using GPS coordinated from the on board GNSS receiver, 2) Log the event history for visualization on Google earth using on board SD card, 3) Provide audible speed reference from 25-125km/h using the stereo headphone 3.5mm 8Ω audio jack, and 4) use of the 4 main board LEDs as status indicators

Log the Event History for Visualization on Google Earth

There are two elements to this portion, first is using the onboard SD card and second, to write data in a KML format.

The SD Card: As with the GNSS geolocation program, the SDK has an Audio program which can be used as a base for working the SD card. The difference with this code is you will be writing data rather than reading and the SD library is only as basic library and works adequately for this task. Other SDfat libraries exist for more sophisticated drive/file management, however this project has not extended or tested using other libraries with Spresense.

KML Format: the KML (Keyhole Markup Language) is designed for data overlays and is used in many ways with Google Earth. In this case, a basic "Pathing" method is used and its general structure is located below. The KML file will be in 3 parts; the header, footer, and pathing details. The details consist of the GNSS longitude and latitude, along with a representation of speed to give the path some depth. Reference to KML format and use can be found at the following link.

The solution provided in this project to manage data logging centered on the applied limitations, however further changes can be applied to add better management and operational capability. Below are a few of these distinct limitations.

The onboard LEDs on the Spresense main board are used to provide a further visual ques to operational activity, and are represented as follows:

These LEDs can be programmatically turned on an off by issuing Led_On(x); and Led_Off(x); commands where x is the representative LED number above.

The following are operation modes defined in the beginning of the program. Each, when defined or not defined, can provide control in a delivered/compiled executable.

Operational Use with Spresense Capabilities

This can operate with or without laptop monitoring. Assuming this will be monitored through the Arduino IDE, the following is the sequence for starting and stopping this integration. WARNING: Do not operate a motor vehicle while monitoring or actively engaged with this equipment or software. It is advised to initiate this in a standalone process or in full operation with a second person operating the vehicle while a passenger can monitor progress or events.

Read the below steps carefully so you may be familiar with the steps, timing, and expectations, before actually running/operating.

Once the Spresense is programed, the need for the laptop/Arduino IDE is not necessary, this would eliminate the need for a laptop. However, since power would be provided by the laptop you will have to switch to using the USB connector on the Spresense board and power from the vehicle or other battery source, ensuring proper voltage conversion. Newer vehicles are made with built in USB port for charging cell phones and can be a perfect option. With this alternative (no laptop/IDE) the general steps would be as follows:

If further enhancements are applied, such as adding a physical on/off switch to control enabling and disabling the KML logging, then the process for starting/stopping is not needed. Regardless the key in this version are the following 3 steps to close the file logging:

Porting code the Sony Spresense is rather easy, there are however some changes that might need to be applied, and some are called out here. Others, can be reference in their online documentation.

Although, I have incorporated using the onboard GPS/GNSS, the SD card, Audio features into this project, the Spresense offers other capabilities that can be further explored including an accelerometer, other audio/speaker control.

For all these features, Spresense provides another angle for discovery, automation, and IoT development. For more information on the Spresense, see the following on Hackster.