A DIY smart scale with alarm clock. No more snoozing: the alarm will go on until you stand on the scale and give up going back to bed!

A DIY smart scale with alarm clock. No more snoozing: the alarm will go on until you stand on the scale and give up going back to bed! 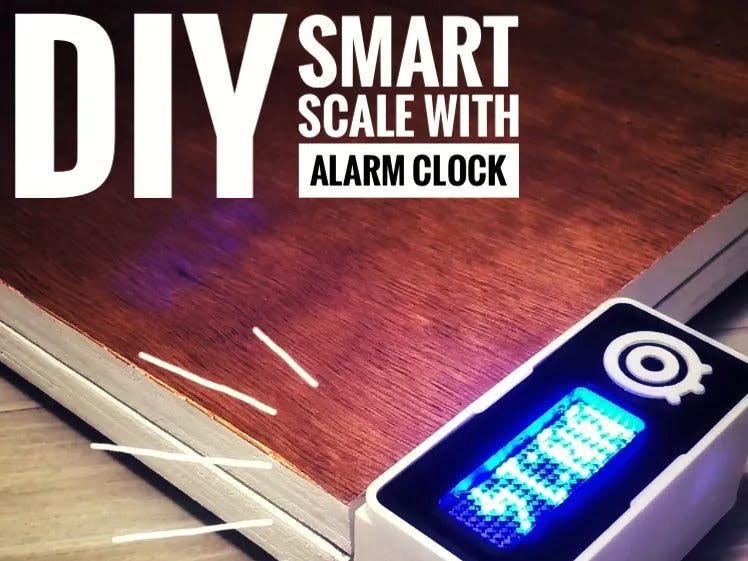 In my previous project, I developed a smart bathroom scale with Wi-Fi. It can measure user's weight, display it locally and send it to the cloud. You can get more details about this on link below:

This solved part of my problems: how to keep a record of my weight and track my gain (or loss) of weight. And then I decided to tackle a second problem: how to wake up earlier (and stay awake)!

Smartphones' alarm clocks typically comes with snooze function. With the push of a button there goes another 10 minutes... and since it is impossible to press the snooze button only once, there goes an hour!

So I thought: how do I make sure I get out of bed (and maybe don't come back) after the ringing of my alarm clock? A normal person might think about putting the alarm clock more distant (or to add several alarms), however I preferred to attack the problem in the makerstyle: using a bit of electronics, programming and Wi-Fi!

In this project I turned my smart balance into an alarm clock. Now, in addition to the features already developed, it has an integrated clock (synchronized with an internet server) and a buzzer. Once the alarm is triggered, it continues to ring until the user can gather enough courage to get out of the bed and stand for a few seconds on the scale.

There are several ways to use this tutorial. You can use it to:

P.s. #1: it's not meant to be used as a cat scale! But, since they were always by my side, they had their place in this tutorial.

P.s. #2: no cats were harmed durring the this project!

The following tools and materials were used in this project:

The links described above are only a suggestion of where you can find the items used in this tutorial (and support my future hacks). Feel free to search for them elsewhere and buy at your favourite store.

I used a FireBeetle ESP8266 dev board, which was kindly supplied by DFRobot. It worked perfectly!

In this project I used the same 3D printed parts designed for my DIY Wi-Fi Smart Scale project.

A 3D printed case provides an enclosure for the electronics, protecting them from physical contact. Electronics are attached in the cover part (using some bolts). This part has a front visor, where the display is attached. Load cells fit into the foot part, which allows the sensors to be attached to the base.

You can download all the stl files on the following websites:

I printed the whole structure in PLA, usign two different colors. The whole print took me around 5h30, using 0.2 mm resolution and 10% infill. No supports needed.

This is a experimental prototype. Notice that it was designed for a given ESP8266 dev board model (the ESP8266 Firebeetle).

If you don't have a 3D printer, here are some things you can do:

I made some whole using a screwdriver for passing the wires of the load cells, and for attaching the 3D printed parts.

You can find detailed instructions on how to assemble the scale on my previous tutorial (link). This time I'll focus on the changes I had to make on the hardware and software to add the new features (a internet synced clock with alarm buzzer). I suggest you to read my previous project before moving on, specially if you want to make the complete gadget.

Long story short, I had to do the following:

Step 5: Preparing the Electronics and Wiring Up the Circuits

At this stage, the scale was already fully assembled and functional. I'll describe here the changes I had to make to add a buzzer.

First I had to disassemble part of the structure. Front cover was removed in order to access microcontroller's pins. A couple of jumpers were connected to digital pins D3 and D5. One of them will provide a GND reference to the buzzer, while the other one will provide frequency signal and create the sounds.

No soldering was required this time. I used female-female jumpers for the connections between the GPIO pins and buzzer pins.

In the end, I had the following connections:

Notice I used pin D5 as a GND for my buzzer. Once all the ground pins of my ESP8266 board were already taken, I used this pin as an output, set to LOW, so that it would work as a GND pin. The current consumed by the buzzer is limited, so it's ok.

The sound of this buzzer isn't that loud. After all, it's only a cheap 5V buzzer, powered from a 3.3V pin. But it's certainly enough for waking me up (considering I put it next to my bed).

Once the connections were checked, the case was closed again. Now let's move on to the Arduino code!

As before, I used Arduino IDE for programming my ESP8266. It's the easier way if you've already used an Arduino before, and you won't need to learn a new programming language, like Python or Lua for instance.

If you've never done this before, first you'll have to add ESP8266 board support to the Arduino software.

You can find the latest version for Windows, Linux or MAC OSX on Arduino's website: https://www.arduino.cc/en/main/software

Download it for free, install it on your computer and launch it.

Arduino IDE already comes with support to a lot of different boards: Arduino Nano, Mine, Uno, Mega, Yún, etc. Unfortunatly ESP8266 isn't by default among those suported development boards. So in order to upload your codes to a ESP8266 base board, you'll have to add its properties to Arduino's software first.

Now your Arduino IDE will be ready to work with the Firebeetle ESP8266 development board.

Navigate to Sketch -> Include Library -> Manage Libraries... on your Arduino IDE and add the libraries above.

Connect the ESP8266 module to your PC's USB port and we are ready for some code!

There are a lot of datalogging services available for communicating a microcontroller to the web. With those services you can upload/download data to/from the cloud, and do a lot of cool stuff. Take a look on my tutorial on how to use an Arduino + ESP8266 to send data from a mini-weather station for Thinkgspeak for instance.

Adafruit.IO is one of those free services. It's really easy to use and promises to bring internet of things to everyone!

Under Feeds > Create a new Feed add a new feed named "my weight". It will create a database, and we will use it store measured weight received from the gadget.

On my previous project (link) I also present how to configure IFTTT service for the communication between Adafruit.io and some fitness tracking plaform (Fitbit, Strava, iOS Health or Misfit). This time I'll focus on the alarm clock part of the code, so I'll skip the details on how to configured IFTTT.

At this point the gadget is almost finished!

Download the Arduino code and open it on the Arduino IDE. The following parameters will have to be updated:

TIMEZONE: the time zone you live in (for clock adjustment)

bedtimehour and bedtimeminute: the time you usually go to bed

Configure them, and upload the code to the ESP8266. The code will start running immediately.

The smart scale will try to connect the WiFi network and Adafruit.io service. On the first use you'll have to setup the alarm time. Go to https://io.adafruit.com/username/feeds/alarm-clock and click Actions > Add data. Enter the time to be used by the alarm clock (use hh:mm format) and send. This value will be received by the scale and stored in its EEPROM memory.

Every minute the clock will be updated, based on values received from Google server. You can find more details about that on here. If bed time is reached, the display will turn of (but the scale will keep running). On alarm time, buzzer will start ringing until someone (or something) is on the scale.

If the weight measured rises above a given value (THRESHOLD), it will read the weight a given number of times (NUM_MEASUREMENTS) and calculate the average weight. If the weight changes more than a certain value (THRESHOLD1) between two consecutive measures, the process will be restarted. After the average value is determined, it will be displayed on the LED matrix and transmitted to Ardafruit.io. The scale will wait until the user steps out, and restart.

To calibrate the scale, put a know weigth object on the top of the scale, and adjust its factor until it indicates the right value. You can measure your own weight on another scale you trust, them measure your weight again on the IoT scale and adjust the factor accordingly.

Once the scale is powered, it will automatically connect the Wi-Fi router and try to reach Adafruit.io. This way it will be ready to send some data (measured weight) and receive some information (alarm clock trigger time).

Then it will connect Google server and read current time. It will be displayed, and the gadget will periodically sync the time again.

Alarm time is received from Adafruit.io. Whenever the feed is updated, this value will be sent to the scale, and it will store it on it's EEPROM memory. This way, if the connection is lost, or if it's powered down for some reason, it won't lose this information.

When alarm time is reached, the buzzer will start ringing. It will remain that way until someone step on it for weight measurement. This value will be recorded on Adafruit.io.

Display will be turned off at a given time, so that it won't bother you durring bed time. Once the alarm is triggered (in the morning) the display will be on again.

I put a lot of effort into this project, to make it as clear and educational as possible. If you liked it, please don't forget to 'like' and 'share' it. Your support is very important to me! :D

If you still don't follow my tutorials, take a look at those other projects in which I explain a little bit about internet of things, robotics and 3D printing. I hope you enjoy them too!

Liked any of my projects? Please consider supporting my future projects with a small Bitcoin donation! :D 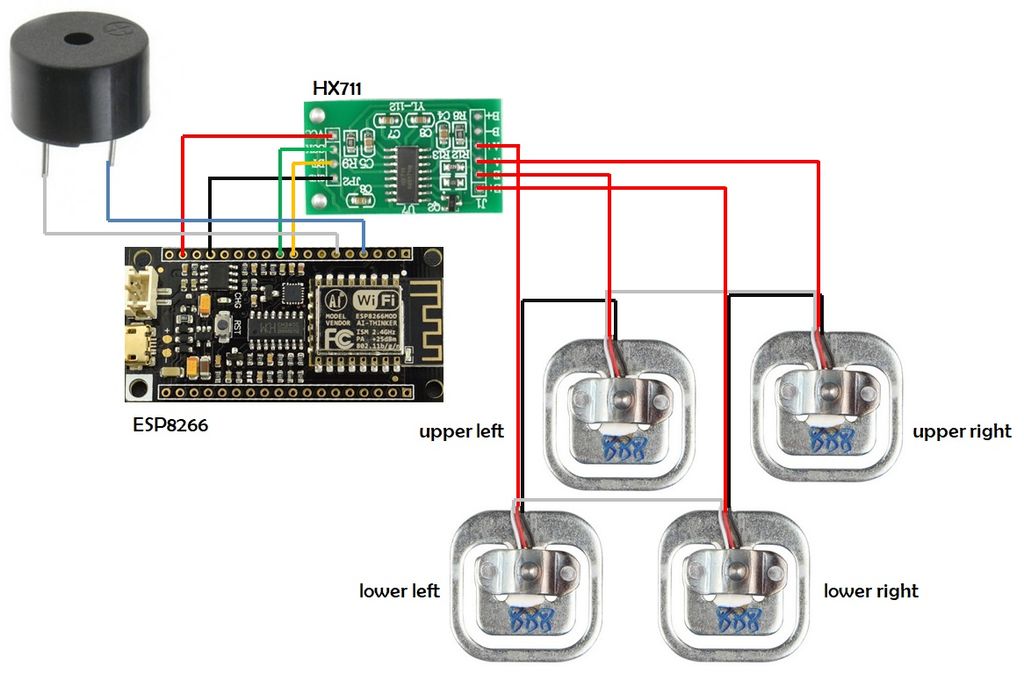