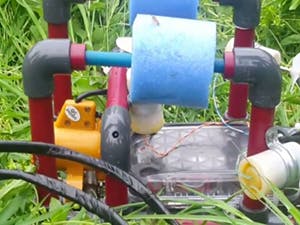 During the school year 2014-2015, the hydrobot team implemented the hydrobot project, a prototype marine robotics program from the laboratory of Sea Grant Massachusetts Institute of Technology (MIT) which is distributed, in Greece, by the Interactive Science and Technology Exhibition Eugenides Foundation.

Hydrobot "Argolith" was implemented by the hydrobot team, in the context of the "Technology in the service of the protection of the environment" program. In order to provide "brain" to our hydrobot, we plugged into it the microcontroller Arduino Uno in order to record the values of underwater luminosity and temperature. Moreover, we used a data logging shield, which provides us the real time clock and the recording circuit in the SD Card, where we saved the data of the measurements. In this way, "Argolith" has an electronic brain. The Arduino circuit is in a waterproof case.

All these measurements happened in Litheos River of Trikala.

Building "Argolith" is a project which can offer great solutions in many scientific fields, as technology, electricity, physics, chemistry, biology.

The project was presented in "Researcher's Night 2015", in "Digital Festival 2015", in "FameLab 2016" and the related lesson plan took the 1st place in the 2nd Hydrobots Challenge in its category http://hydrobots.gr/index/?p=4194.

Finally, the Municipality of Trikala awarded the hydrobot team during a planned event on the bank of the river by offering a tablet.