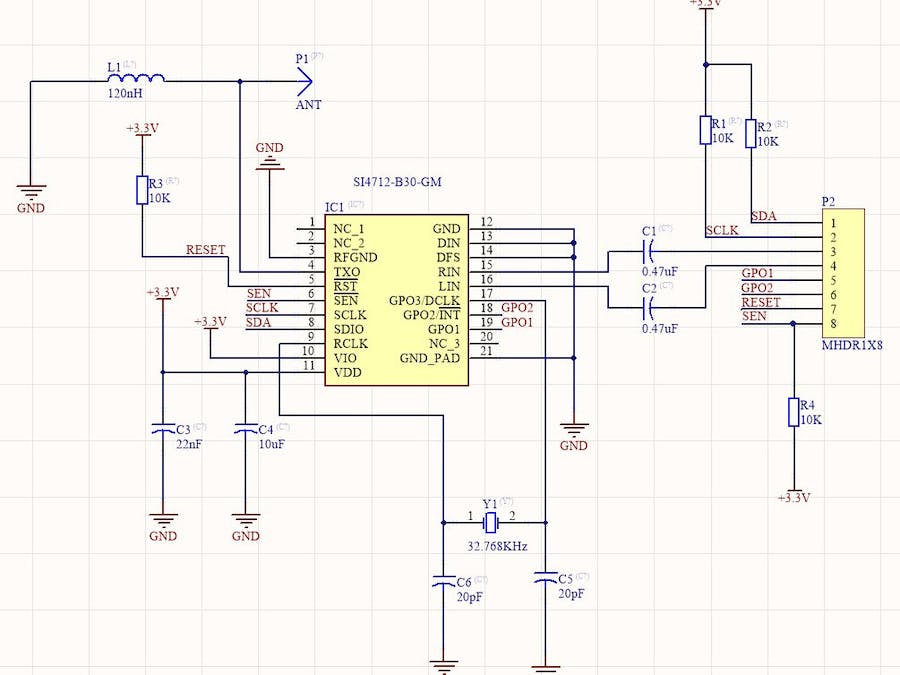 For this purpose, instead of using discrete components and building one of the traditional transmitter circuits, let’s use the Si4712/13chip. According to the Si4712/13 datasheet: “The Si4712/13 is the industry's first 100% CMOS FM radio transmitter with an integrated receiver to measure received signal strength. The device leverages Silicon Labs’ highly successful and proven Si4700/01 FM receiver and offers unmatched integration and performance allowing FM transmit to be added to any portable device by using a single chip. The Si4713 supports the European Radio Data System (RDS) and the US Radio Broadcast Data System (RBDS) standards including all the symbol encoding, block synchronization, and error correction functions.”

The chip supply can be selected in a range between 2.7Vto 5.5V. Therefore if you plan to connect it to a 3.3V microcontroller, you can supply the chip and design your circuit with the 3.3V supply, otherwise power it with a 5V supply to be applicable for the 5V logic microcontrollers. The connection interface of the chip with the output is the I2C. Therefore a proper supply voltage selection can prevent future problems with the logic voltage match, for example, a 3.3V microcontroller and the 5V I2C bus.

I use the Altium designer to design schematics and PCBs.I did not have the footprint or schematic symbol of the Si4712/13 chip, therefore, as usual, I used the Samacsys search engine to quickly find and use the component.

A downloaded component library can be imported in more than 23 CAD software. In my case, I used the Samacsys Altium plugin which directly finds the components and installs them inside a schematic document. Similar plugins are also available for the Eagle and KiCad.

Anyway, I selected the 3.3V logic and prepared a basic schematic diagram. You can download and modify it based on your needs. If youhave selected a 5V microcontroller, some small modifications should be made in the circuit, mainly to the I2C connection. I'll try to cover the logic level conversion in a different article.

A Si4712/13 Arduino library is also available which you can easily play with it and transmit the data. You can also measure the received signal strength.

“The Si4713 supports the European Radio Data System (RDS)and the US Radio Broadcast Data System (RBDS) standards including all the symbol encoding, block synchronization, and error correction functions. Using this feature, the Si4713 enables data such as artist name and song title to be transmitted to an RDS/RBDS receiver.”

We can make many cool projects out of this, isn’t it!