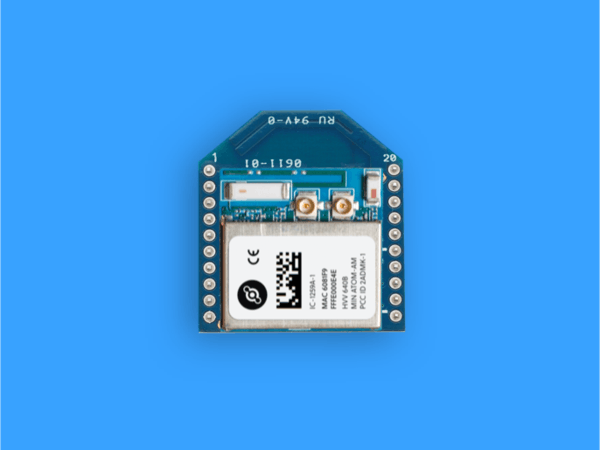 Helium exists to help developers build low power, secure, connected devices. In this project, we'll walk through using the Helium Atom Prototyping module with an Arduino Zero and Adafruit Ultimate GPS Breakout to seamless send data to Azure IoT Hub and then on to a Power BI report to visualize the data.

You can learn more about Helium's low power, secure, long range wireless products and buy all the required hardware at helium.com/store.

The first thing you'll need to do is attach your Helium Atom Prototyping module to the Helium Atom Arduino adapter, and then to your Arduino. We're using an Arduino Zero for this guide, but you can use a Uno, Due, M0 or any other Arduino you'd like.

Once you've connected the Atom to the Arduino, you should have something that looks like this:

The Helium Atom Prototyping module attached to an Arduino Zero

Next, we'll need to attach the Adafruit Ultimate GPS Breakout to the Arduino sandwich. We're going to use a breadboard here just to make things easier and clearer, but you could just as easily wire the GPS breakout directly to the Arduino. Your wiring should be in the form of:

You should have something that looks like this once you're done:

Ok, now that we have the Arduino side of things setup we need to get the Helium Element connected and powered up. If you have a Cellular Element, you just need to power it on and wait for the light to turn a teal color. That's it. If you have an Ethernet Element, or if you prefer to use an Ethernet connection for your Cellular Element, plug the Ethernet port of your Element into a DHCP-enabled port like the back of a cable modem or wireless router. Once you power up the Element and the light on the front of the Element turns green, you're good to go.

Now that you've got the Arduino and Atom hardware setup, and the Element is powered up and connected, it's time to set this all up in the Helium Dashboard.

First, we need to add our Atom and Element to our user account in the dashboard. If you don't have a user account but have equipment in hand, please email us at support@helium.com, otherwise login with the credentials you received when you purchased your hardware from Helium.

Once logged in, we'll need to first activate our Element. Clicking on Elements on the left, then Add New in the top right gets you to the right place. Type in the last 4 of the MAC address and the HVV from the label on the back of the Element, give it a name, and optionally add some tags. Click Activate Element to get it going.

Activating an Element in the Helium Dashboard

We'll then need to repeat the same process for the Atom. Again, click Atoms on the left, and Add New, and supply the MAC and HVV from the Atom label, optionally add some tags, and click Activate Atom.

Once you've logged in to Azure, we're going to create an IoT Hub. Click on the + in the top left, then Internet of Things, then IoT Hub:

Select IoT Hub at the top

You'll need to make some choices about how you want to set your IoT Hub up, and then hit Create. We recommend that you select Pin to Dashboard at the bottom to make it easier to find later:

Once you're done and the hub is finished deploying (this might take a few minutes), click on it from your dashboard. To setup the Helium Channel we'll need one piece of information from within the hub. From within the IoT Hub choose Shared Access Policies on the left, select RegistryReadWrite, and then click the copy icon next to Connection string—primary key on the right. This will copy the connection string to the clipboard which we'll be using back at the Helium Dashboard. Be careful not to share this string with anyone you don't trust. (We're just using a temporary hub in this example.)

Getting the Connection String from your Azure IoT Hub

Back at the Helium Dashboard, we now need to create a Channel that maps to the Azure IoT Hub you just created. First, click on Channels on the left, and click on Azure IoT Hub below Create New Channel. We're going to paste in the Connection String we copied from Azure to create the Channel on Helium:

Creating the Azure Channel with Helium

Give the Channel a name and then hit Create. It's important to remember the name, as you'll need that in your Arduino code to send data to this Channel.

With the Azure IoT Hub set up and a Helium Channel created, we now need an appropriate Arduino Sketch that makes use of the Helium Arduino and Adafruit GPS libraries to send GPS locations to Helium, and then on to our newly created Azure channel.

Firstly, you'll need both the Helium Arduino library and the Adafruit GPS library installed in your Arduino IDE. The easiest way to accomplish this is to go to the Sketch -> Include Library -> Manage Libraries menu from within the IDE, and search for both Helium and Adafruit GPS and hit Install.

The below sketch initializes the Atom, creates a Channel that matches the Azure IoT Hub Channel we created in the previous step, collects GPS data from the Adafruit GPS board, formats it into JSON, then sends it over the Helium network.

With the libraries installed, create a new sketch (File -> New from within the Arduino IDE), and paste in the above code. Connect up your Arduino/Atom sandwich via USB, and hit the Upload button which looks like a right-hand arrow.

After a few seconds you should see the Atom lights start blinking red and blue, and then settle into a steady red blinking pattern. This means the Atom is now connected to the Helium network. The GPS FIX light should also be blinking with a slow red pattern. Once this stops, the GPS module has fix on your location and will start sending data to Helium. It helps to try and place the GPS near a window or ideally be completely outside.

You can check the Serial Monitor (Tools -> Serial Monitor) from within the Arduino IDE to see the debug output. You should see messages showing connecting, creating channel, and then a sequence of No GPS fix! messages until a satellite fix is acquired.

Checking that data is being sent correctly

Now that the Arduino, Atom and GPS are up and running, we can return to the Helium Dashboard and make sure that data is making its way up to the Azure channel.

Clicking on Channels on the left and then selecting the Azure channel you already made in the Active Channels section should bring you to a detail view - scrolling down here should show you the Event Log, where you'll hopefully see something like the screenshot below. This shows the timestamp and size of data, as well as reporting on whether it was successfully routed to Azure:

If you take a look at your Azure IoT Hub under the Device Explorer navigation you should also see your Helium Atom device listed under its MAC address. Clicking on it will also confirm that we've secured this device automatically, without any configuration required, using a hardware-signed X509 certificate.

Getting the data into Power BI

We'll assume that you have a Power BI account already setup, and a workspace already created. (If not, head over to www.powerbi.com and set one up.)

With your Power BI account setup, we'll now need to create an Azure Stream Analytics Job to take the data from the Azure IoT Hub and deliver it to Power BI.

From within the Azure dashboard, click New in the top left, and search for Stream Analytics Job, selecting it once it appears. Click Create in the bottom left, select the options, and hit create to set it up.

Give the job an alias (name), then select IoT Hub from the source dropdown. Pick the appropriate IoT Hub from the IoT Hub dropdown, and leave everything else as default. You should end up with something looking like this:

Setting up an input in the Streaming Job

Once the input is created, we'll create an output that connects to Power BI. From the Streaming Job page, click Outputs from the left menu, and then Add. We'll choose Power BI from the Sink dropdown. You'll have to then authorize your Power BI account and select the Workspace you want to use. Create a name for the table. You'll end up with something like this:

Setting up the Power BI sink

The final step is to create a Query that links the input to the output. Again, click Query from the left menu. You'll want your query to basically be in the form that matches the screenshot below, depending on what you named your inputs and outputs from the previous step. This will select all data coming from the IoT Hub and output it to the Power BI workspace.

Hit Save in the top left, and assuming you named everything correctly, you're almost done. Now return to the Overview page and hit Start in the top navigation bar, and after a few minutes you'll have data streaming into Power BI.

Now that the data is flowing, we can do a quick visualization in Power BI to show us where everything is on a map.

Head over to your Power BI Workspace, and click + Create in the top right corner, and select Report. You'll then select the dataset you created in the Azure Streaming Job and hit Create.

Creating a Report in Power BI

Next we'll choose the map visualization in the right hand pane, it looks like a white globe. On the far right you'll see the fields of data that we've been sending from the Arduino. Drag lat to Latitude and lon to Longitude in the pane to the left. You can also drag EventProcessedUTCTime to Tooltips if you want to see when it was sent on mouseover. Then hit Save in the top right. That's it! You'll now have a map showing the location of your Helium Atom attached to the Arduino.