Robo Hazel is a robot prototype made using Arduino and WIZnet S2E module to advance industry 4.0 and solve the problem of message delivery.

Robo Hazel is a robot prototype made using Arduino and WIZnet S2E module to advance industry 4.0 and solve the problem of message delivery. 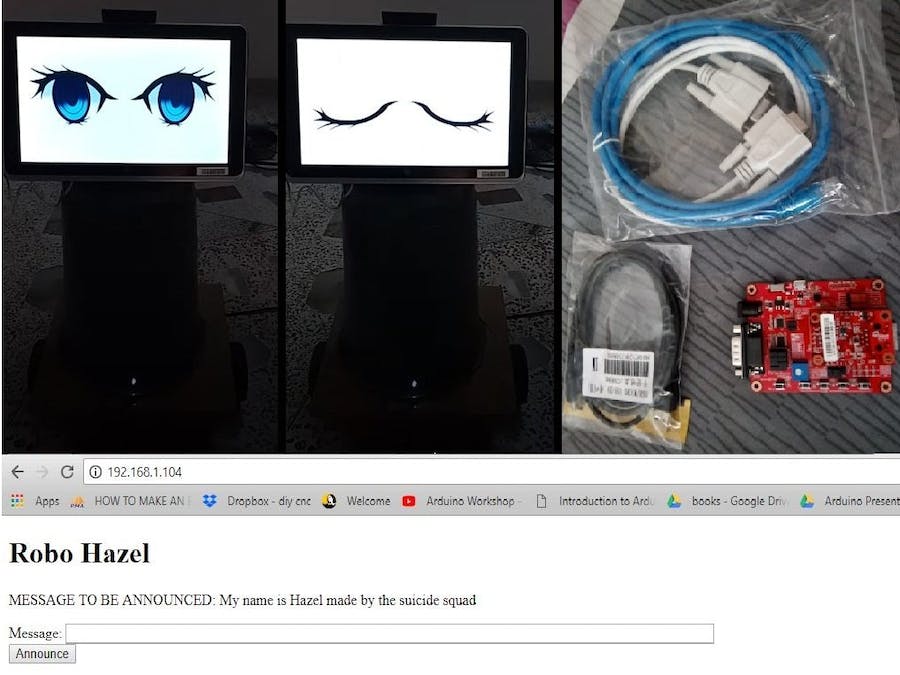 Robo Hazel works by receiving a message from her control page, which is made using a WIZ750SR (Serial to Ethernet Module by Wiznet), as shown in the screenshot below.

Users can type any text at Hazel's control page and click the Announce button. Hazel is placed anywhere at a starting position; she receives the text (which the user has typed on her control page) with the help of a Python program. Meanwhile, the robot starts moving, and the Python program converts that text into speech. After reaching the final position (her destination), Hazel stops and speaks the text, as shown in the video below. Hazel arrives at the last spot from her initial position by following a line.

So, a department head can type any message he wants to convey to his employee on Hazel's control page. Hazel will receive this text, convert it into speech, reach to the employee by following a line, convey her message (speaks the text), and the task is automated!

First of all, we need two Arduino UNO:

Then, we need a WIZ750SR-TTL-EVB kit. It consists of WIZ750SR-TTL (3.3V TTL ver.), evaluation board, and cables. WIZ750SR is a compact-sized serial to Ethernet module using the W7500P Ethernet MCU (SoC based on ARM Cortex-M0 architecture). Visit the following link for product details, datasheets, and more information.

Then, we need any tablet PC that can be used as a robot's face. I used my Haier Y11B windows tablet PC, but you can use any tablet of your choice.

Other components are mentioned in the Things heading of this tutorial.

Block diagram of the system

The second Arduino (6) is used on the robot side to control the robot’s locomotion and send the signal to python application in tablet PC (7) with the help of USB A to B and micro USB to OTG cables (8) as shown in fig. 3.

We have to configure our WIZ750SR using WIZnet’s configuration tool which enables product search, product settings, and firmware upload via the network.

WIZ750SR is compatible with WIZ107/108SR and uses the same configuration tools. The tool can be downloaded from the following link.

Now, plug your WIZ750SR module into the WIZ750SR-EVB board and connect it with your router with a LAN cable as shown in fig. 2. A blue LED will glow indicating that the connection is made. Connect Micro USB Type B Cable with your PC to power on the WIZ750SR-EVB board and open your configuration tool. Your device will be shown when you click the Search button at the top.

You can set the requirements of the device using this configuration tool. For my project I changed the settings as follows:

You can also use any software like Angry IP Scanner to get your ip address by giving an ip range.

After changing the settings, click the SETTING button in the configuration tool to update new settings.

Configuring WIZ750SR is also explained in WIZnet’s Getting Started Guide.

If you want to use the latest version of the configuration tool, you can download it from the following link:

First of all, we have to bypass RS232 converter modules by using the following jumper settings.

We now need to go to Arduino online web editor. Go to the following link:

Or you can download Arduino from the following link:

Upload the code that I have attached in this tutorial into your Arduino UNO board using Arduino’s web editor.

Note: Remove Rx/Tx connections before uploading the code in Arduino.

Now after powering it on, go to the IP address that you have assigned to your WIZ750SR. In my case it is 192.168.1.104 and I used google chrome web browser to access this IP address.

Screenshot when the page is loaded for the first time

As shown in the screenshot above we have made a server using Arduino and WIZ750SR serial to ethernet module. Arduino sends serial data i.e. an HTML form, using Rx/Tx pins to the module which transmits it across an IP address. Now, whenever a user types the IP address assigned to WIZ750SR in a web browser an HTML form is displayed.

You can see that there is nothing written in front of MESSAGE TO BE ANNOUNCED heading when we opened this page for the very first time. This is because we have not typed any message yet. Now when we type any message and click the Announce button the message string is sent in the URL as we have used a GET HTTP Method. To learn about HTTP METHODS (GET and POST) click here.

The URL of this page can be noticed after we have clicked the Announce button in the screenshot below.

Now, our Arduino code reads the URL, filters the message from it and stores it in the EEPROM of Arduino using the following lines of code:

Now, if we go to Hazel's control page by typing that IP address again. The following lines will read the last message that was stored in Arduino's EEPROM and displays it in front of MESSAGE TO BE ANNOUNCED heading.

Following is the screenshot after reloading the page.

Now, right-click on the page and go to VIEW PAGE SOURCE.

The following tab will be opened.

This is the page source. The paragraph from this page i.e a text to be spoken by our Hazel is then scrapped by Python program of our robot where this text is converted into speech (and stored in a temporary audio file) while our robot is walking and it is spoken (the temporary audio file is played) when the robot reaches its targeted location.

So, we have used made a connection between Arduino UNO and WIZ750SR to make a web server and used EEPROM of Arduino to save text which is then fetched by our robot.

Arduino is connected to tablet PC (which serves as a face of Robo Hazel) with USB A to B and micro USB to OTG cables as shown in the picture below.

Now, we need two DC motors, a motor driver (L298N H-Bridge), three IR sensors, a battery, a breadboard, and an Arduino UNO. Connect all the components with Arduino UNO according to the following schematic.

Upload the code for the robot side in your Arduino UNO. I have attached the code in this tutorial using the Arduino Web editor. (https://create.arduino.cc/)

Now, to make the robot's body we can use a wooden base, a PVC pipe, plastic dustbin, small wheels, and any tablet holder (to be used as the neck of a robot) as shown in pictures below.

IR sensors are attached at the front of the robot with which she follows the black line path to reach the final position from its initial position.

Following is the robot’s locomotion test.

I used high torque DC motors and a 12V - 7A battery for my final product. You have to select motors and battery considering the size and weight of your robot's body.

Hazel reaches the targeted location, where she speaks the text, by following a black line path using IR sensors. So, now we are going to discuss the line follower part of our robot.

So far, we have seen that Hazel receives the text from its control page with the help of a Python program and converts the text into speech during her journey to the targeted location where it speaks the text.

When the robot is turned on it prints "Message: Announce" once on the serial port that is read by Python program in our tablet PC as the Arduino is connected serially with our tablet PC. After reading this message, python program starts converting the text to speech.

Meanwhile, Hazel reaches the final position by following a black line path with the help of three IR sensors. The following lines of code helps her in following a line.

After reaching the final position Hazel stops and prints "Signal: 1 1 1" that is again read by the python program and Hazel speaks the text whenever she gets this signal.

Hazel stops where all of her three sensors are on a black finish box as shown in the figure below.

The IDE used for Python programming in our project is PyCharm that can be downloaded from:

The program attached in this tutorial that can be downloaded and run on our tablet PC which is attached serially (using cable) with the robot’s hardware (Arduino UNO).

Python program is based on pygame module. This program continuously reads the serial port using the serial module. When Hazel is turned on, she gets a signal 'Message: Announce' from Arduino (Arduino writes it on serial port) after which she scraps the text to be spoken (i.e. a paragraph) from Hazel's webpage using web scraping technique. The program then converts the text into speech using gTTS module and saves it in a temporary audio file. Meanwhile, the robot moves towards her final position. Now, when Hazel reaches the targeted location, Python program gets a signal 'Signal: 1 1 1' from Arduino and only then she stops and speaks the text (plays temporary audio file).

Adobe Photoshop is used to design the eyes of Robo Hazel. A close and an open eye is designed and they are programmed to blink using Python.

On the whole, a user types any text on Hazel’s control page that is made using WIZ750SR and Arduino UNO. This text is stored in Arduino’s EEPROM and it is also displayed on her webpage. Now, when the robot is turned on, the Python program gets a signal after which it reads the text (typed by the user on Hazel’s control page) by using a web scraping technique and converts this text to speech and saves it in a temporary audio file. Meanwhile, Hazel starts moving towards the final position where she has to speak this text. After reaching the final position, Python application gets a signal from Arduino UNO again, Hazel stops and speaks the text i.e. the temporary audio file is played.

In this way, I made a prototype of this advanced robotic system that solved the common problem of message delivery in an industry. 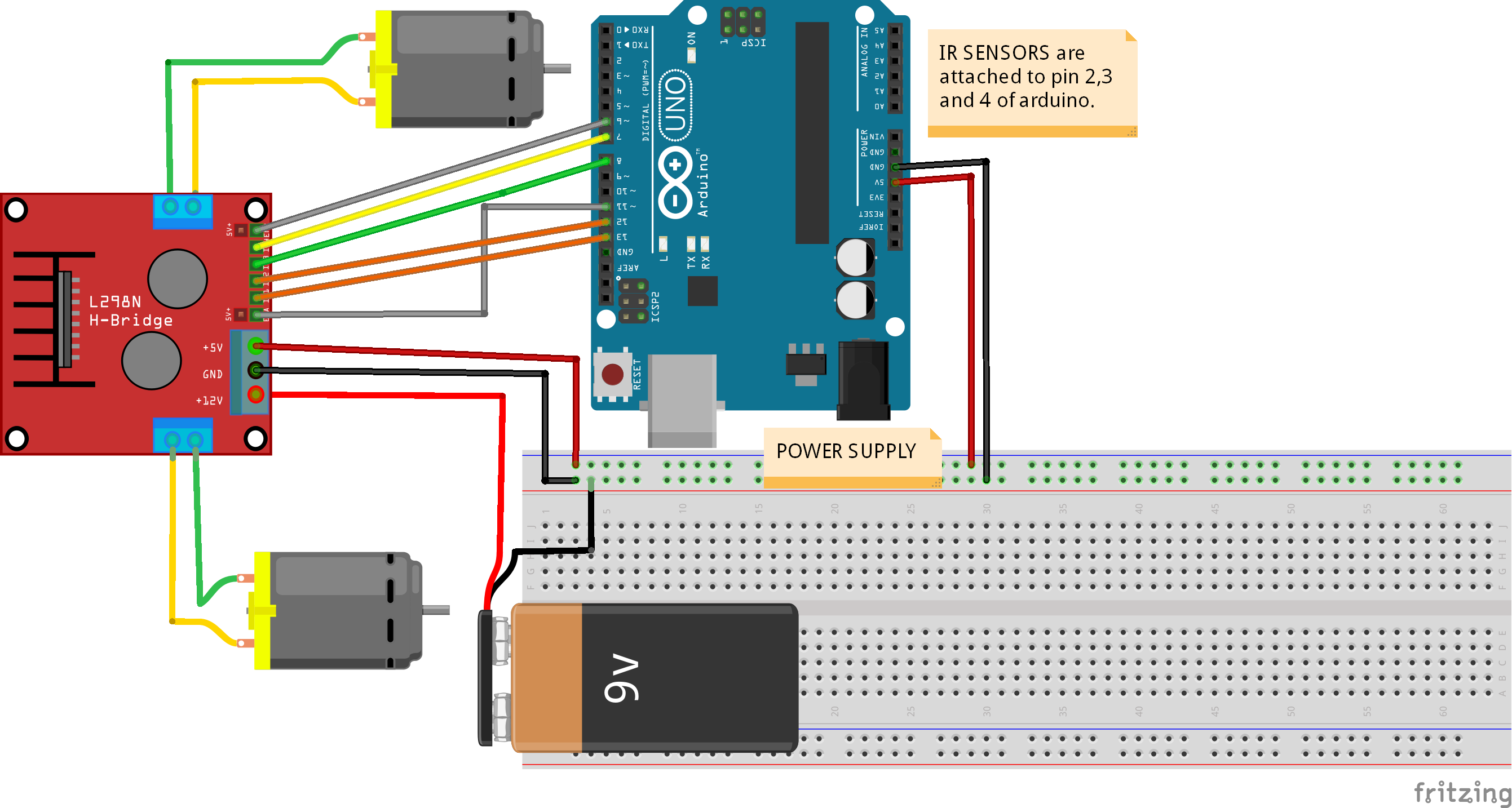 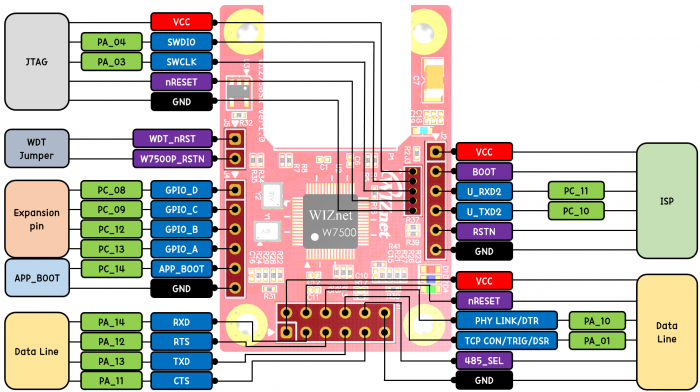