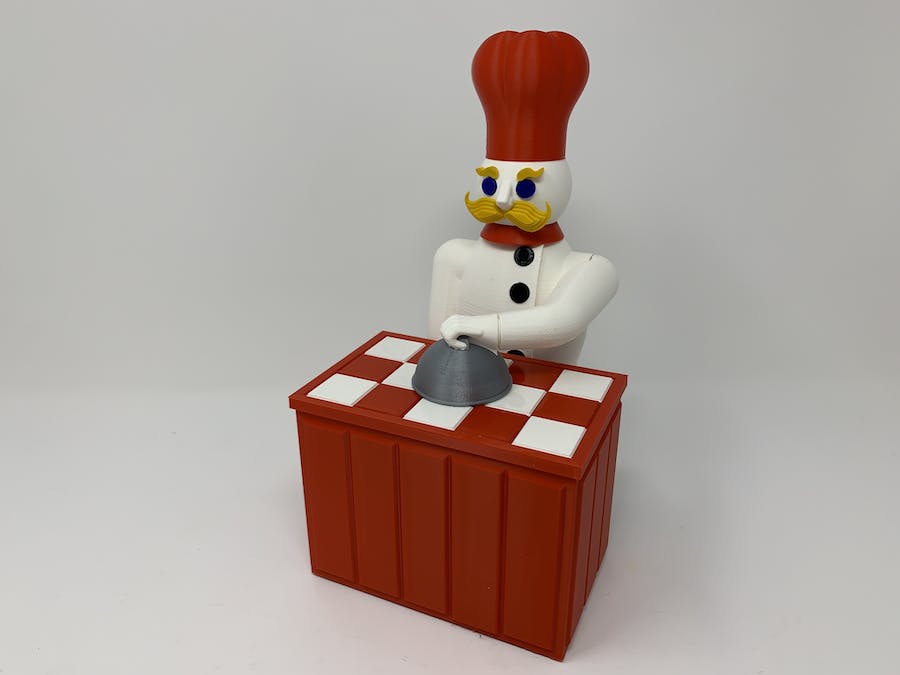 I truly enjoy automata and after viewing the works of automata creators such as positivelycreative, Keith Newstead and Paul Spooner, I decided to attempt to create a series of "illusion" themed automata, the "Magic Chef" being my first.

In this automata, a chef presents food to an imaginary customer (the viewer) only to be rejected, whereas the chef lowers the "cloche" styled food dome then raises it to "magically" present yet another food selection.

As usual, I probably forgot a file or two or who knows what else, so if you have any questions, please do not hesitate to ask as I do make plenty of mistakes.

One final note, I receive no compensation in any form whatsoever for the design, equipment, parts and/or materials used in this model.

Designed using Autodesk Fusion 360, sliced using Cura 4.4.1, and printed in PLA on an Ultimaker 2+ Extended, and Ultimaker 3 Extended and an Ultimaker S5.

I acquired the following parts for this mechanism:

This mechanism is a high precision print and assembly using at times very small precision 3D printed parts in confined spaces. Prior to assembly, test fit and trim, file, drill, sand, etc. all parts as necessary for smooth movement of moving surfaces, and tight fit for non moving surfaces. Depending on you printer, your printer settings and the colors you chose, more or less trimming, filing, drilling and/or sanding may be required. Carefully file all edges that contacted the build plate to make absolutely certain that all build plate "ooze" is removed and that all edges are smooth. I used small jewelers files and plenty of patience to perform this step.

This mechanism also uses threaded assembly, so I used a tap and die set (6mm by 1, 8mm by 1.25) for thread cleaning.

To prepare the carousel, I performed the following steps:

To prepare the ratchets, I performed the following steps:

To prepare the springs, I performed the following steps:

To assemble the carousel, I performed the following steps:

To assemble the base, I performed the following steps:

At this point, I applied power to the mechanism to make sure the carousel 60 degrees per each lowering and raising of the carousel, and when completely raised a food item was centered in the hole in the top. If not, carefully adjust the position of the two ratchets making sure that both are aligned and oriented to allow food centering. After alignment and test, I removed power.

For assembly of the chef components, I performed the following steps:

For final assembly, I performed the following steps:

And that is how I 3D printed and assembled my "Magic Chef".

I hope you enjoyed it!

36 projects • 4 followers
The more mistakes I make, the more knowledge I gain.
ContactContact