Because simple is sometimes better.

"Lora and I", a Simple 3D Printed Automaton

"Lora and I", a Simple 3D Printed Automaton

Because simple is sometimes better. 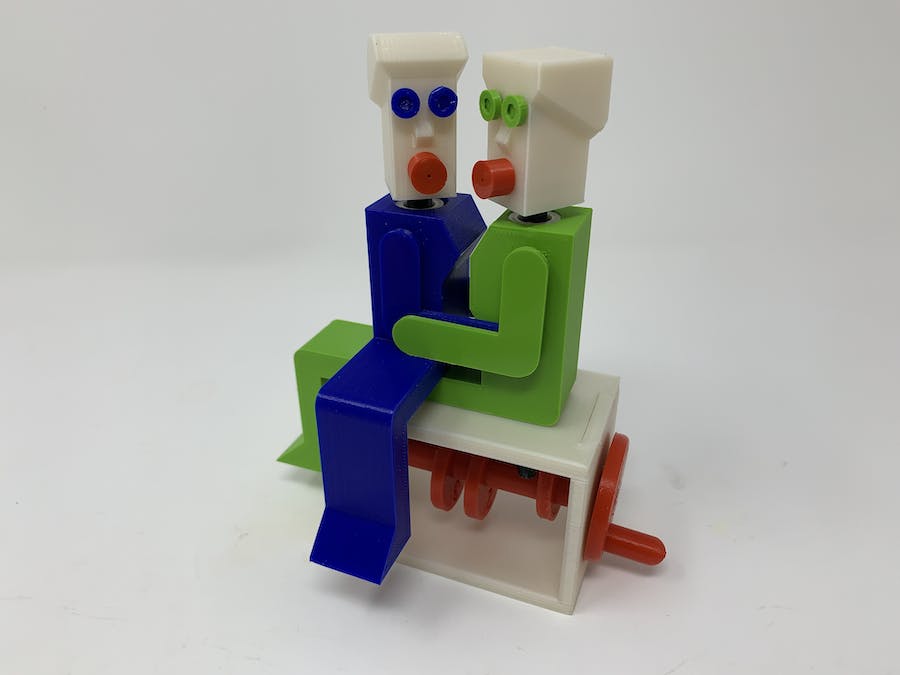 "Lora and I, a Simple 3D Printed Automaton" is an updated version of the first automaton I designed, 3D printed and assembled about nine years ago inspired by various versions I'd seen at craft shows and on line. This version is sturdier, requires fewer parts and is hand operated so no motor or power source (other than you) is required!

3D printing and assembly of this model is quite easy and it makes a great first automaton. Along with all.stl files required to 3D print this model, I've also included the file "Lora and I.f3d", an Autodesk Fusion 360 CAD file containing all steps I used to create this model. This file may also be used to customize the model to your liking.

As usual I probably forgot a file or two or who knows what else, so if you have any questions, please do not hesitate to ask as I do make plenty of mistakes.

Jewelers files and / or sandpaper.

Prior to assembly, I test fit and trimmed, filed, sanded, etc. all parts as necessary for smooth movement of moving surfaces, and tight fit for non moving surfaces. Depending on you printer, your printer settings and the colors you chose, more or less trimming, filing and/or sanding may be required. I carefully filed all edges that contacted the build plate to make absolutely certain that all build plate "ooze" was removed and that all edges were smooth. I used small jewelers files, sandpaper and plenty of patience to perform this step.

To assemble the base, I:

To assemble the top, I:

For final assembly, I:

And that is how I designed, 3D printed and assembled "Lora and I, a Simple 3D Printed Automaton".

I hope you enjoyed it!

25 projects • 3 followers
The more mistakes I make, the more knowledge I gain.
ContactContact