Incorporating design and coding, this project has investigated the relationship between the audio levels and temperature in a classroom.

Incorporating design and coding, this project has investigated the relationship between the audio levels and temperature in a classroom. 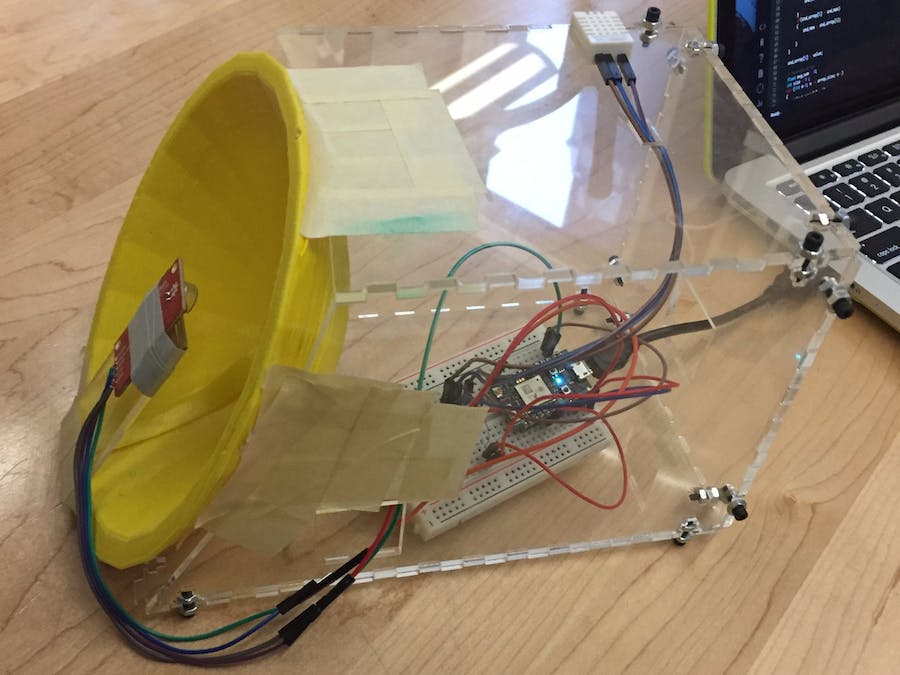 Interest was developed as we became aware of human activity and how colder conditions tend to make things slower. The human condition and activity level were the essential question taken into account, as the sound produced in a classroom is logically made up of a majority of sounds from the humans occupying the class itself. Interest was also piqued as we wanted to study the mechanism of sound, and how to design a sound-friendly enclosure that incorporated the principles of math itself.

Our purpose for this was ultimately to link two phenomena that were found to be unrelated before and use the comparison to make indirect observations about how temperature and sound reacts. This was also indirectly used to see the effect of temperature on human-developed noise, as we mentioned in our interest section above. The purpose of the design was to find a way to maximize the pull power of the data and to essentially yield data that was representative of the sound. It was also to allow for the form to follow the function, as most of the designing of the piece was for the sole purpose of enhancing the data retrieval.

Sounds, according to the Oxford dictionary, are vibrations that travel through the air or another medium and can be heard when they reach a person's or animal's ear. Sounds specifically made in a classroom setting can range from sounds made from human activity, sounds made from environmental noises, sounds made from electronic sources, sounds made from sudden accidents, or background sounds. Sounds from environmental noise was found to be insignificant due to the presence of windows as well as the placement of the enclosure. Sounds from accidents were accounted for by the use of averaging out the sound before it is taken, as well as filtering out the data that were clearly outliers. Sounds from electronic sources were taken into account and were deemed to be not significant as the coordinated teaching plan of the specific teacher allowed for the majority of the class to be spent doing group activities

The code was written in the Arduino language and coded into a DHT 22 sensor as well as a SparkFun Sound Detector. The code's backbone was pre-programmed by Rob and Satya however it was developed by Aydin Truong and Jeffrey Solin. The Fritzing diagram was created by Aidan Meier.

The code pulls the string of the audio data and then averages it out and the temperature is the direct temperature taken at that specific interval. This yielded data that dealt with intervals of seconds as well as something that dealt within the coding of strings that translate strings into viable data for data engines such as Word or Google Sheets. This is shown in Code 1.1.

The Fritzing Diagram is also shown below in Figure 1.5. The DHT and the SparkFun sensor was attached to the breadboard as such.

The design at the beginning was a combination of an inverted cone structure with a focal point in the middle where the two sections diverge from. One section was filled with the sound detector, and the other section was supposed to be filled with the temperature detector. This would allow exposure that the two detectors needed. After reconsideration from Satya and Rob, due to the components of the sound being important in the over, we opted for a boxed enclosure design as well as a 3D printed TinkerCAD dish that would function as the centerpiece of the design.

The initial sketch of the design, seen in Figure 1.1, accounted for a integration of the enclosure and the dish. The enclosure would be cut at an angle and attached somehow to the dish as the dish became the main facade for the design (seen in Figure 1.4). The sketch was inspired by Corinne Michele West’s conceptual rectilinear and curvilinear designs, inspired partly by the MAXXI Museum by Zaha Hadid and its’ integration of early 20th century futuro-romanticism and camera focals in the 20th century. The box element contains the microcontroller itself, and a detached DHT sensor was put on the top of the clear acrylic box.

During our experimentation with the cardboard prototype, the Sound Sensor was placed in a focal position on the created “dish”. In Figure 1.2, the sound sensor is placed about 1.2 centimeters above the center of the dish as was calculated by the equation (D2 / 16c). This was tested countless times. During this prototype phase, the materials for the 3D printed objects was found as well as the dimensions for the enclosure.

We used this information that we found to create the actual project itself. Because of possible changes we might need to do, the enclosure’s components were stuck together using box tape. Figure 1.3 shows the finished product. The project’s design was a reminder of early 2000s Nintendo gadgets with its’ transparency and the use of red, blue and yellow as color components. The slight angle of the enclosure allowed for putting the colored yellow dish on the table, without a possible wobble.

The location was in a large, urban high school with at least 4 levels or floors of classrooms. The location was placed in the left bottom corner of the room, in a somewhat elevated steel surface. The finished product is placed surrounded by 3 non-heat conducting sources, including a tape dispenser, a pencil case, and a bookshelf. It is about 3 meters away from the closest window source, but it is closer to the door, which can be a source of wind and/or air. The object is obstructed from the view of the students, but due to its’ design it picked up the majority of the sound in the room anyway.

This chart is a comparison of the temperature vs the average sound. The x-axis shows the timestamp of the experiment.

Figure 1.1 is shows the TInkerCAD OBJ file in which the parabolic dish was made in. The dimensions are in centimeters, and the object is 5 centimeters wide, and with a depth of 5 centimeters as well.

The limitations to this project or the obstacles in this project were the profound amount of designing and detailing that went into the code and the dish itself. The dish was the most complicated object to make and the code was changing incessantly. Therefore, a limitation for that is the use of the code was the precision of the code and the precision of the dish. The components were very complex.

Another limitation is that this takes the average sound data for a second, which is an interval of time that can be very tricky to contain. It also does not find the decibels of sound.

In addition, human error could be a large limitation as it was out of the grasp of the engineers after deployment. Possible use or misuse could be the reason for outliers in this experiment.

Contextualizing this back into the context of world events, this could show the relative dispensaries in the amount of people living in different environments and/or the reason for human activity developing in the equatorial region. The presence of heat therefore can be connected to the movement and use of heat in migrations across Africa and how that would affect the levels of human activity in a place. It might also be connected to skin potential and how skin potential and movement of specific people can be explained by a latent mechanism that connects the