A gadget which instantly detects and displays the height of the object placed under it.

A gadget which instantly detects and displays the height of the object placed under it. 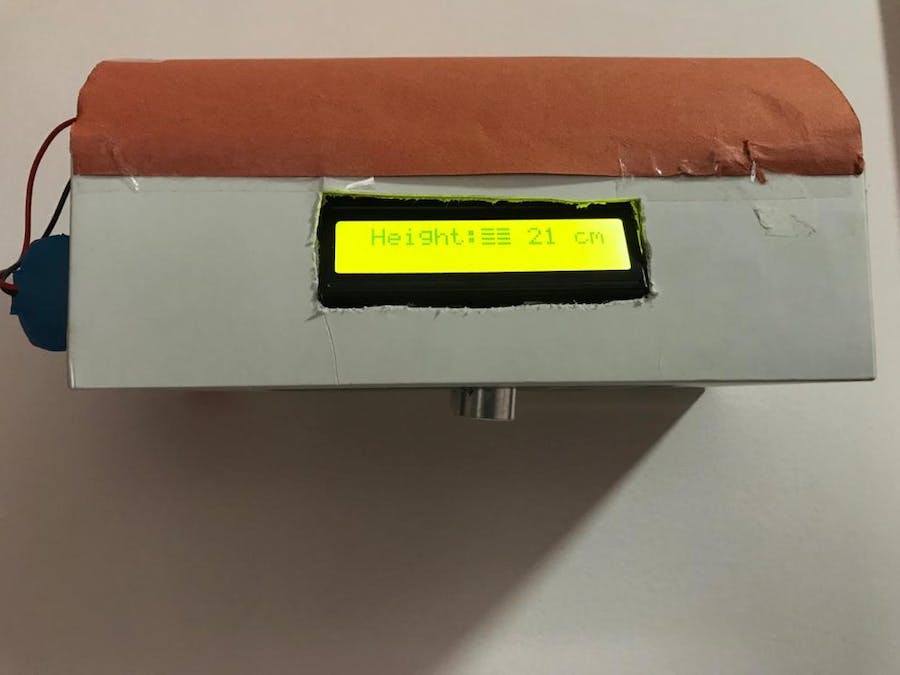 This lock-down due to the COVID-19 crisis became a new reason of boredom for me, but also inspired me to create new things- I made a gadget called a 'Wearable Social Distance Detector Gadget', and now I wanted to build something new. This gadget is called an 'Instant Human Height Detector Gadget'. It has the main body of a mobile box, with an LCD (Liquid Crystal Display) screen at its front, which displays the height measured based on the calculations made by the gadget, based on the ultrasonic sensor. The Arduino Board is programmed such that the maximum height it can measure is six feet (the maximum height to be measured can be set in the code), i.e., the gadget must be fixed on the wall at a height of six feet.

For better understanding of how this functions, here is a video on how it works.

The following are the steps in making this gadget-

1. Connecting the Arduino Board to the LCD Screen

The first step is to connect the Arduino Board with the LCD screen, while also connecting a potentiometer, which helps in setting the clarity of figures displayed on the LCD screen. These components shall be connected using a breadboard. Below, you will find the imagery of how to perform the necessary connections.

Arduino Board to LCD screen connections

2. Connecting the Ultrasonic sensor to the Arduino Board

3. Connecting a 9V battery to the Arduino Board

Voila! The gadget is completed, and the final packaging is entirely up to you. I have packaged all of it into a mobile box, with a chart paper as a covering canopy at the top. After the packaging is done, fix the gadget at a height of six feet(as defined in the code, the gadget subtracts the distance between the sensor and the object from six feet, to obtain the object's original height).

I hope these steps would be helpful in recreating this model; it is a non-touch height detector which can be useful in this Corona Virus crisis, especially in hospitals and such places where height is a requirement to be checked.