A 3-way OBD2 breakout board that allows you to monitor and route signals anywhere you want using simple jumper blocks and wires.

Using an OBD2 Breakout to Sniff, Re-route, and More

Using an OBD2 Breakout to Sniff, Re-route, and More

A 3-way OBD2 breakout board that allows you to monitor and route signals anywhere you want using simple jumper blocks and wires. 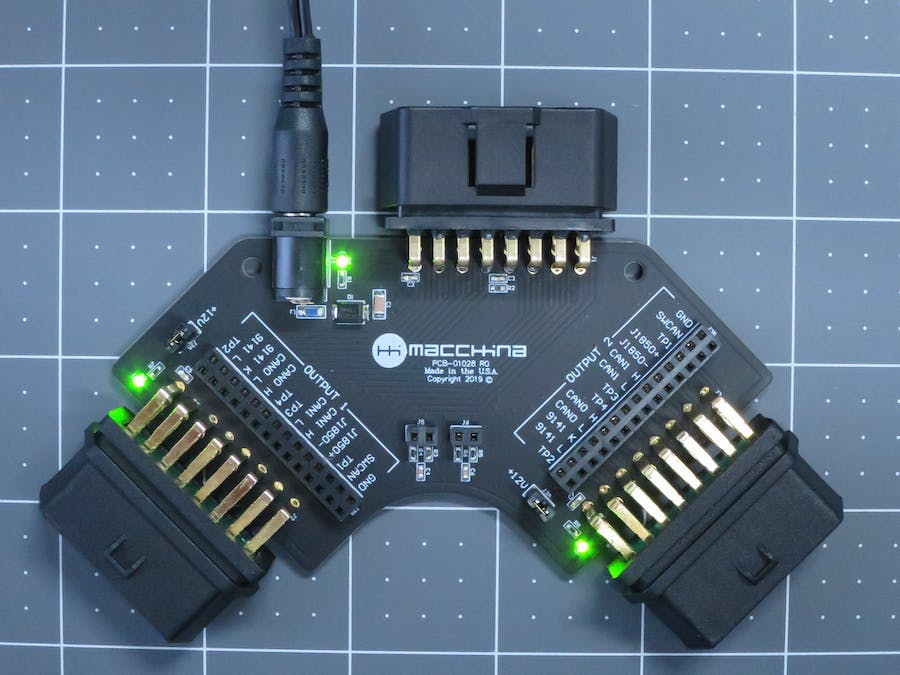 The OBD2 test board is designed to simplify OBD2 device development.

Typical setup: M2 is acting as an emulator while developing A0 code

The OBD2 test board has several components as shown below:

OUTPUT OBD2 Connectors: 2 output connectors. (FEMALE pins). These connectors are the same as found in any modern car.

Power jumpers: Control power to each output by installing Jumpers. GREEN LED confirms power is ON.

Junction blocks: Route OBD2 signals to the connectors as needed. All signals are broken out and available. More about Junction block functionality below.

The junction blocks near both OUTPUT OBD2 connector gives you the flexibility to change how signals move between connectors. Install a jumper wire between rows to make "through" connections, or jump over to other pins to rearrange signals.

Warning - be careful when rearranging signals between OBD2 connectors. Not all pins have same voltage levels.

The row closest to the OBD2 connector goes directly to the connector.

Note: Ground is already connected between the 3 OBD2 connects, but also available on junction blocks for convenience.

The OBD2 test board can function in several "modes" by rearranging how the signals route throughout the board. For example:

This mode allows you to use external test equipment to watch traffic. In the example below, the CAN0 channel is being "sniffed."

In our case, if we wanted to intercept, change or better understand a CAN conversation, we'd use the connections shown below. The CAN traffic to and from "Scanner" would need to go though our device (shown in the middle as "man" below).

Connect 2 OBD2 dongles together for desktop development purposes. Typically, one of the devices would be set up to be an Emulator and the other a scanner, etc. In many cases, you'd need to ensure the CAN bus is terminated as shown below

The OBD2 test board has several modes and many configurations - all of which can be made using standard jumper wires. For example, breakout or splitter modes are easy to do with the OBD2 test board.

Schematic and board files

We've put the schematics and board files into a GitHub repo. Feel free to create an issue with suggestions, bugs, etc.