It's not the compute performance, it's how you use it.

It's not the compute performance, it's how you use it. 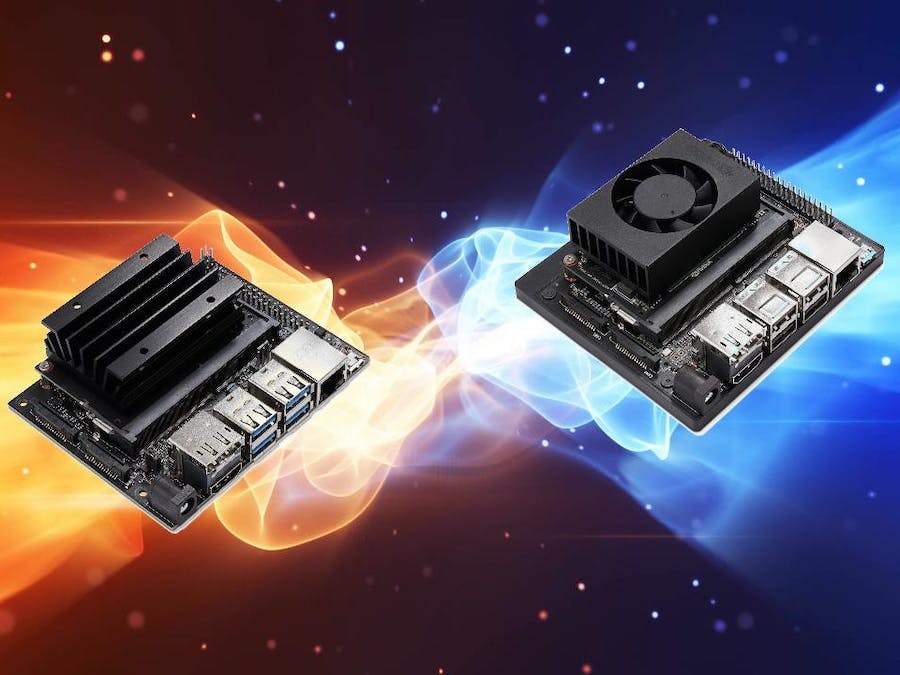 The following article is a transcript from the video published on my channel. It also appeared on Seeed Studio Blog.

Today we’re going to have a good look at new development kit from NVIDIA - Xavier NX and compare it to another dev kit from NVIDIA, Jetson Nano. The compute module Xavier NX was announced on November 6, 2019, but the development kit, which includes the module and reference carrier board was announced just half a year later, on May 14, 2020. This is the opposite situation of what happened with Nvidia Jetson Nano - in that case development kit came first and then the compute module became available for purchase.

So, how does Xavier NX compare to Jetson Nano? The price difference is significant, 99 USD vs. 399 USD or about 400 percent. Is there a clear threshold for when you know that Jetson Nano is not enough for your application and you need to up your game a level?

Before we start our comparison, we should note that these two products being targeted for different target groups - Nvidia Jetson Nano is for makers and STEM education, while Xavier NX is more geared towards professional and commercial use. It was very obvious from the sample applications that Nvidia released on product’s launch - for Jetson Nano it was Jetbot with a series of user-friendly notebooks and for Jetson Xavier NX it was a demo of cloud native applications, which appeals to commercial users. That still warrants a comparison to be made - think about it as Xavier NX being a sports car with two turbo engines and Jetson Nano is a more down to earth sedan. We don’t always go for fastest car available, even if we have the money, there are many other considerations to take.

Let’s start by looking at two dev kits side by side. I’ll skip the unpacking, because, well, you know how to open a box without me. If not, please leave a comment below, I’ll make another tutorial soon. Fist, the similarities. Both dev boards are similar in size and the modules are exactly the same size and form factor. Which is great for developers, it means that during developments stage swapping Nano module for Xavier NX won’t require changing connectors and physical design of carrier board (providing they use Rev B01 of Jetson Nano Dev Kit).

Both carrier boards have Gigabit Ethernet Jack, 4 USB 3 ports (although for Xavier NX it is USB 3.1 and for Jetson Nano it is 3.0), HDMI port and display ports.

Xavier NX has an active cooling installed, while Jetson Nano only has a heatsink. It’s because Xavier is much more power hungry than it’s younger cousin - the dev kit cannot be powered by 5V USB and requires 19V power supply, which fortunately is included in the box. The reference carrier board of Xavier NX has more well-thought design with a little plastic base, that serves two purposes: protects the circuits from directly touching the surface of your workplace and holds two antennas. A slight detail, but very nice.

Apart from very obvious things, such as Xavier NX having CPU with more cores and higher clock rate and more RAM(faster too, 25.6GB/s vs 51.2GB/s), it is the AI Performance column that worth paying more attention too. Before you go, “Holy cow, the AI performance of Xavier NX is 44 times higher, than of Jetson Nano”(21/0.472~44) it is worth noting that the comparison is between different units TOPS vs TFLOPS.

The reason for that is for Xavier NX, the compute of NVDLA Engines is included in that very impressive number. Jetson Nano (and older members of Jetson family, TX1/TX2) only have GPU for accelerating ML inference, which are optimized for floating point operations. NVDLA Engines on the other hand are different beasts entirely and are ASICs or Application Specific Integrated Circuits, more akin to Google TPU/Intel Movidius chips.

They excel at running CNN inference in INT8 precision, doing that task faster and more energy efficient than GPUs - the downside being that they are not as general purpose, when it comes to different network architecture support. NVIDIA realized that GPUs alone cannot beat highly specialized hardware and decided to take best of both worlds by having both advanced 384-core NVIDIA Volta™ GPU with 48 Tensor Cores and dedicated CNN accelerators in the new module.

Speaking of Tensor Cores, we also see that these are missing from Nvidia Jetson Nano’s GPU. Now, what on Earth is Tensor core? That’s exactly a title of an article on the first page of Google Search results for tensor core. Comparing to CUDA cores, CUDA cores operate on a per-calculation basis, each individual CUDA core can perform one precise calculation per revolution of the GPU. As a result, clock speed plays a major role in the performance of CUDA, as well as the mass of CUDA cores available on the card. Tensor cores, on the other hand can calculate with an entire 4x4 matrice operation being calculated per clock.

Look at the animation here to get a sort of intuitive understanding of what is going on in regular CUDA core and Tensor core.

Alright, that was a brisk, but invigorating walk through forests of high-performance compute. If you’re an engineer like me, you want to know how exactly all of that translates to inference performance. This time NVIDIA created a dedicated repository with easily downloadable and executable benchmarks, a decision I can applaud to. So, I ran the benchmarks from this repository on both Nvidia Jetson Nano and Xavier NX. Quite unsurprisingly the results were very close to these from Nvidia Blog article.

Something worth paying attention to is that for Xavier NX the total FPS is sum of FPS obtained from running model on two DLA and GPU simultaneously. You can find that by looking at the content of benchmark.py.

You can modify it to print out the total FPS and inference time for each device (for Xavier NX), like that.

Second test will be using much touted new feature in Jetpack 4.4, “cloud-native”. Basically it is about bringing containerization, and orchestration from servers to edge devices. Why do that? To simplify the continued development. Containers are self-contained packages, that include all the necessary environment to run an application. Main selling point of containerization is that they make upgrades easier - because they’re self-contained, you don’t need to worry about updating one package will cause versioning bugs in your whole system. Nvidia prepared a “customer service” robot demo to showcase the new container management system and hardware capabilities of Xavier NX. Unfortunately, because 3 of 4 containers for that demo have TensorRT engine files built for Jetson AGX Xavier and Jetson Xavier NX and can be run on Jetson AGX Xavier or Jetson Xavier NX only. So, we’ll download and try another container, Deepstream-L4T, and run sample application from within the container. Sample application are already precompiled and ready to run within container … unfortunately they hard-coded to look for their respective config file in the folder where you run the application, which might cause some confusion.

Allow external applications to connect to the host's X display

After that run the container with

Then move to the folder with app config file

And execute the test app - copy and paste the file name to run on multiple streams:

we will go for deepstream-apptest3 and run it with 720p video. Jetson Nano can only run smoothly one video stream, once we add the second one, performance drops significantly. For Jetson Xavier we see a similar picture, once we add second stream, it starts dropping frames.

Upon checking with jetson_stats we see that CPU and GPU load never reaches 100 percent, so possibly the performance bottleneck here is in SD card reading speed. For their "service robot" demo application that runs 4 containers simultaneously it is necessary to use NVME SSD.

As for our final comparison, let’s try stepping aside from the demos Nvidia have provided and using a model we trained ourselves. In the end, this is the real test of performance and user-friendliness - the results you can achieve, as opposed to carefully optimized demos. We will use aXeleRate, a Keras-based framework for AI on the edge. It’s purpose it to simplify the training and conversion of models to be run on various edge devices, such as K210, Edge TPU, Android/Raspberry Pi and Nvidia dev boards. NVIDIA’s model optimization toolkit, TensorRT is very different from other toolkits fro model conversion, such as nncase, Google Coral converter. Unlike the rest of them, with TensorRT you need to optimize model on the target device, since optimizations depend on the target device’s architecture. TensorRT definitely deserves a video - possibly a video series of its own, and I will make one in near future.

We will use NASNetMobile trained on Stanford dog breeds dataset - go through the steps in the notebook, remember to modify config file to enable the conversion to.onnx format!

After training is done download the.onnx file to Jetson and run onnx_to_trt.py file in the example_scripts/nvidia_jetson/classifier folder.

The script will convert.onnx model to serialized.plan file which has model graph optimized for target device - meaning that you will not be able to run.plan file created on Xavier NX on Jetson Nano and vice-versa.

Now we can run classifier_video.py on a sample video file.

As for conclusion, new Nvidia Jetson Xavier NX is a beast. It’s power hungry, but if performance is what you’re aiming for, than it is the best module you can get at this footprint and price. If you are developing an application that requires processioning multiple video streams at high resolution while performing ASR/NLP or another GPU related tasks (CUDA enabled SLAM for example), then it’s deep learning accelerators can take on CNN inference and leave GPU for other tasks - something that older TX2 or Jetson Nano are not capable of. For makers and hobbyists - well, if you’re buying it, make sure you already thought of application that requires that much horsepower under the trunk and also you have enough technical knowledge to eliminate any performance bottlenecks if these are present.

Have you have any application that can fully utilize the capabilities of Xavier NX in mind? Leave your thoughts in the comments below. Add me on LinkedIn if you have any questions and subscribe to my YouTube channel to get notified about more interesting projects involving machine learning and robotics.

Until the next time!