This tutorial demonstrates a fun project for waving flags to get started with PivotPi.

This tutorial demonstrates a fun project for waving flags to get started with PivotPi. 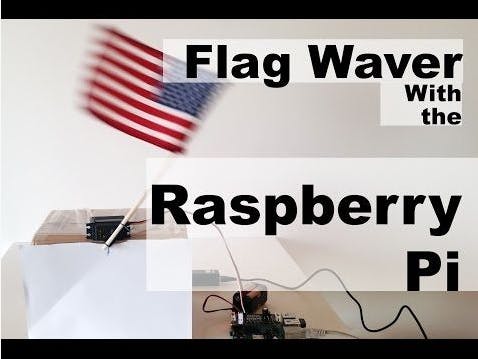 PivotPi is our new hardware to control servo motors. Its design is made elegant and compact to fit the Raspberry Pi Zero. PivotPi can also be connected to any of our Robots GoPiGo, GrovePi and BrickPi. It can drive up to 8 Servo motors and has two I2C ports to accommodate daisy chaining of other I2C devices. This tutorial will demonstrate a fun project on Waving Flags to get started with PivotPi.

In order to make the flag stand on the Servo motor, insert a stick into the straw of the Flag and reduce its width as shown in the image to make it fit on the servo motor.

This completes the hardware setup and your PivotPi is ready to be programmed!

To get the libraries clone our repository using:

And type the following code:

Save the code by pressing ctrl+x and y Run the code using:

You can learn more about the technical specifications of the PivotPi here.

Ask on our forums!

32 projects • 78 followers
We think everyone should be able to build, learn, and experiment with robotics.
ContactContact