This is a low cost robotic arm with 6 axis that you can build with analog servo motors. (I personally used digital servos from hitec).

This is a low cost robotic arm with 6 axis that you can build with analog servo motors. (I personally used digital servos from hitec). 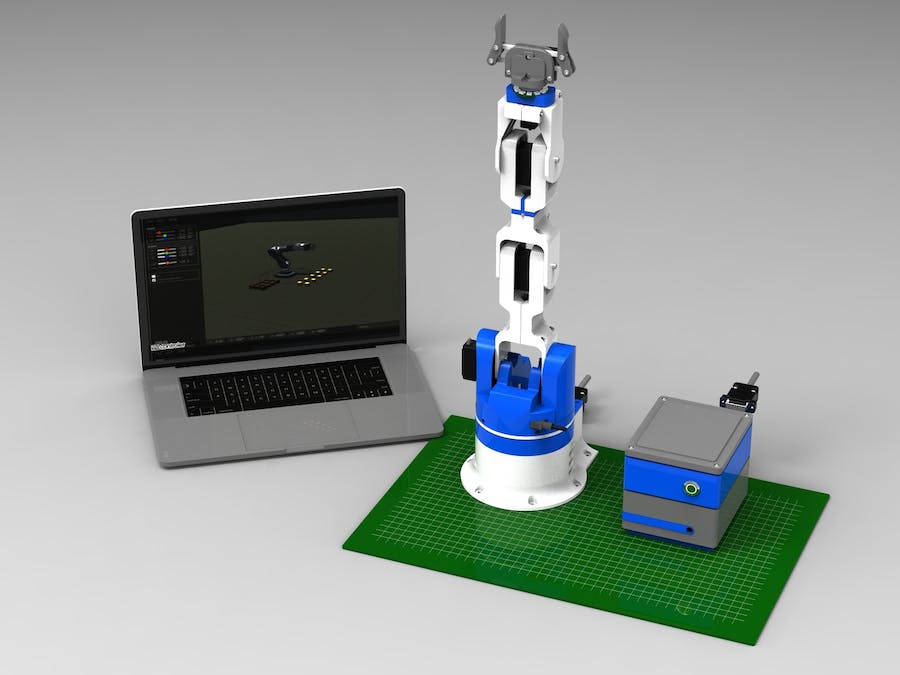 This is a low cost robotic arm with 6 axis that you can build with analog servo motors. (I personally used digital servos from HITEC; they are more controlled by the end stops because it isn't mechanically anymore.) It also has a NeoPixel head and there is a simple mechanism to exchange different toolheads on it.

For the moment I'm printing and testing. It will be days when all the parts arrive on this site.

Mostly small printed 3D parts so they can be printed with almost all 3D printers.

The hardware controller is made out of two parts: one built-in servo driver and one Arduino Mega or Uno board to exchange data with the PC controller. I'm working on a PC software that will run on PC, MAC and Linux machines; for any progress, look at project logs to see the Graphical GUI controller in progress. Very soon this robot arm will work in this environment, it will run inverse kinematic at full speed! There will be an editor to record/play scenarios.

To give it a professional look I used 3 colors to build up the hardware controller. It will be the gateway between robot arm and PC software. The PC software will be written in Unity and will be running on PC, Mac and Linux latest operating systems. The hardware is made out of the following parts.

All schematics will be online in the next coming days. I've already printed and assembled the hardware controller and it is working fine. All 3D files will be available in the coming days in step and stl format.

Some photos of the build hardware controller.

I have already developed a piece of the software called 'Robo GUI controller'. I will give you a sneak preview:

Started the build on the robot arm, it will be build with HITEC digital servos. I've made a gripper how can be exchanged and beneath a NeoPixel ring LED to signal when the robot is moving or when there will be something wrong.

I have made a new base because I wasn't satisfied enough, in the next comming day you will see the complete improvements, for now some renderings.

It's a lot stronger, going to use a continues rotation servo for it with a potentiometer for the position. All wiring will go through a slipring , by this way there will be no strugling with the wires and I can turn the full 360° around.

Some new added things on the base, I think it will be final now, just printing it and test if everything will be correct.

Added a magnetic angle sensor for rotation of the robot, and put a fan inside to keep it cool. Cool isn't it! :-)

And here a quick overview of the base so far, the technical drawing sheet.

Building sheets for the base:

Building sheets for the Hardware controler:

Drawing sheet of the robot arm with all dimensions.

First parts printed from the robot arm, the base and it's looking good!

All parts 'Base' printed,assembled and tested! ready to get the files!

The base turning around very smooth!

Have fun making it yours :-) give some feedback if you build one.