The time is now capable to write down a definition of what a smart city is. Like its ancestors, smart city now has all the factors in place to become a reality. The cities that grew out of the agricultural revolution, and then later the industrial revolution, were driven by similar factors — increased population and technological advances that facilitated and drove a change in living conditions. The modern city has these same factors, but on a much larger scale; the global population, as mentioned earlier, is growing exponentially and we need ways of dealing with it.

The pressure of population on resources is a major factor to smarten up our current city models. And, the technology to do so is finally here in the form of hyper-connectivity, improved and cheaper sensors, AI, and data analytics. The clue here is in the data; data is the new energy in the modern smart city. Data, or rather the analysis and application of these data, will be the pivot upon which the smart city turns. So a smart city should have a combination of ways technology improves important aspects and tasks of cities, like monitoring water and air, waste management, parking, lights, and vehicles.

One of the major issues in waste management is non-optimized garbage collection truck routes.Truck routes that are not optimized lead to the use of excessive fuel and produce congestion in densely populated cities. In addition, some bins may end up being overfilled and others under-filled as a result.So what we are actually going to solve is the optimization of garbage collection truck routes so as to avoid the congestion and excessive fuel usage.

This is how the project is going to work. We are connecting fill level sensors in the waste bins which continuously monitors the fill level inside the bin. At every morning at a fixed time (say, 7.00 am) the data is uploaded to the tangle. A garbage truck driver is able to retrieve data from the node using a suitable device and he can optimize the truck route.

The principle of an IR sensor working as an Object Detection Sensor can be explained using the following figure. An IR sensor consists of an IR LED and an IR Photodiode; together they are called as Photo – Coupler or Opto – Coupler.

When the IR transmitter emits radiation, it reaches the object and some of the radiation reflects back to the IR receiver. Based on the intensity of the reception by the IR receiver, the output of the sensor is defined.

Once the bin is filled the sensor returns 1 and if not it returns 0. (The ultrasonic sensor can be used instead and is widely used. For simplicity we are using IR proximity sensor.)

Python is an interpreted, high-level, general-purpose programming language. We use python to build the whole project.

This is the official Python library for the IOTA Core. It implements both the official API, as well as newly-proposed functionality (such as signing, bundles, utilities and conversion).

PrettyTable is a simple Python library designed to make it quick and easy to represent tabular data in visually appealing ASCII tables.

Setup Raspberry Pi by installing Raspbian OS or any other suitable operating systems. If needed follow this tutorial.

Download and install Python 3.5 or above if not previously installed. Then install other libraries like PyOTA and PrettyTable.

If pip is installed enter following commands in the terminal to install the libraries.

We can create an IOTA wallet address using IOTA mobile wallet. You will find a QR code when generating new addresses using the IOTA wallet or by searching an existing address at https://thetangle.org.

We have two python codes for this project. One which is running on the Raspberry Pi zero which is connected with the sensor. This python code reads the data from the sensor continuously and sends the bin number and the status of the bin to tangle.

The other python code is used by the garbage truck driver or any other authorized person. This code reads data from the tangle and displays data of bins in a comprehensive manner.

Then run the code displaydata.py in an android device or a computer (or another Raspberry Pi). It will display the data with bin numbers and their fill level status. By taking a look on the data driver can optimize the truck route. 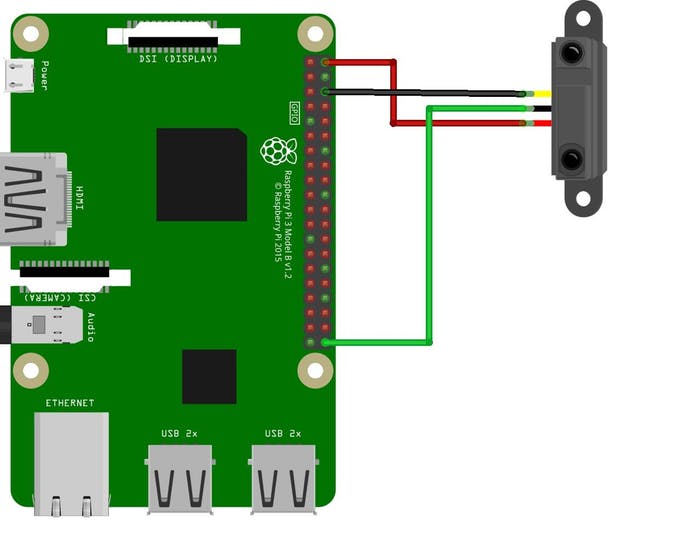 7 projects • 26 followers
I know only one language, the language of 0's and 1's
ContactContact