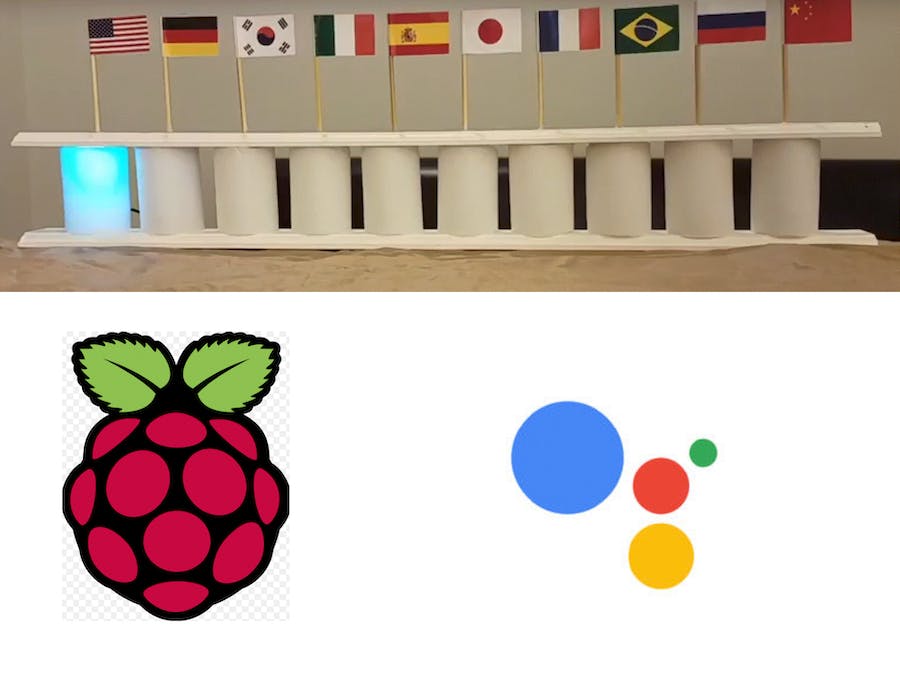 This is for anyone that would like to be able to speak to google assistant using multiple languages at the same time. I made my own google home voice assistant so that I can talk to it in all 8 available languages English, Spanish, German, French, Italian, Portugese, Korean, Japanese. Plus semi Russian and Chinese (Mandarin). You speak the language wake word first follow by your question in that language. You can use it for fun or try to teach yourself a new language. Mainly this was to demonstrate that it is possible to speak to google simultaneously in different languages. However, it is a little slow and has some kinks to work out. This is project is a follow on to my other project in which I changed out the voice of google to something else. The project is similar but uses different coding to accomplish the task. Project was built using 1 raspberry pi 3, some LEDs, old styrofoam tubes, and python. The display is completely optional as you could do this using just a raspberry pi, speaker, and microphone.

I have created a walkthrough video which will guide you step by step on how to do this. The first step is to go through the walkthrough from google to setup your personal google assistant. Here is the link to the site.

After you completed the step and have a basic assistant working you will then copy the code from my github into the sample library location on your raspberry pi. This folder should be located at "/home/pi/env/lib/python3.4/site-packages/googlesamples/assistant/gprc"

Once copied, open and edit the code to customize your wake words and responses to your own preferences.

You will now able run to the code using the following command. Replace 'youridhere' with your device model id you created during google assistant tutorial.

You will now be able to interact with google by saying one of several wake words.

Once activated you will hear your raspberry pi give a greeting in your selected language. You can now ask it a question in the language selected. Russian and Mandarin will be the only two languages you will need to interact with in English.

6 projects • 10 followers
I am one of those people that is always thinking up of new ideas. I thought it would be great if I can show my ideas with others online.
ContactContact