Fitting the "legacy" theme of the year and using their logo we built a wooden badge that contained over 200 individually animated LEDs.

Fitting the "legacy" theme of the year and using their logo we built a wooden badge that contained over 200 individually animated LEDs. 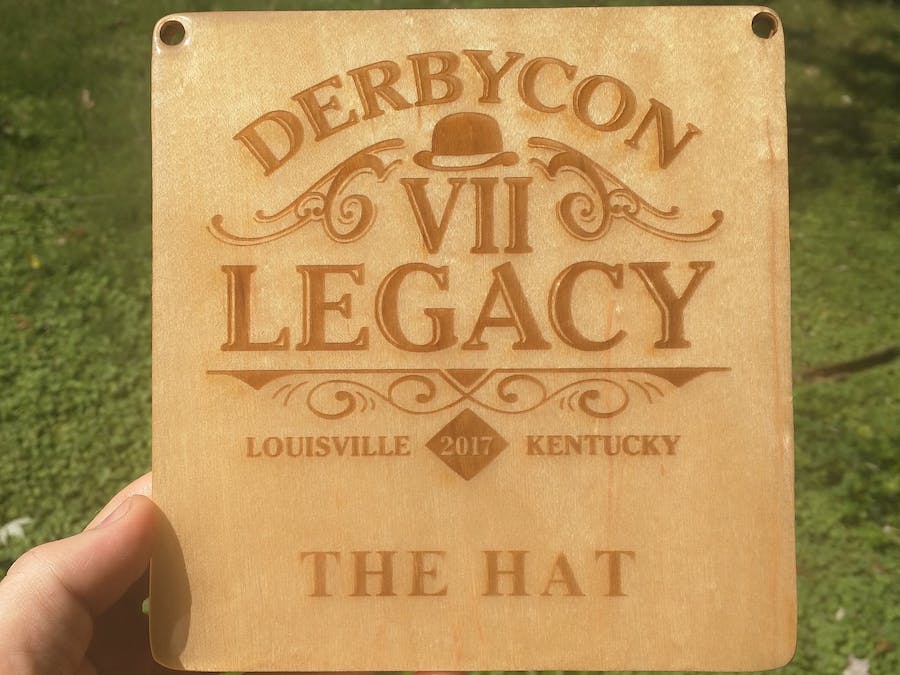 The 2017 DerbyCon Black Badge* presented us with a challenge; each year we try to top ourselves and build something even cooler than before. The previous year's badge featured over 170 animated LEDs, capacitive touch buttons to switch modes, and hidden modes to unlock so how were we going to top that? Inspiration came from their new logo and theme: Legacy.

NOTE: because these are Black Badges* we cannot share all the plans/details to avoid making it too easy to replicate these; they are supposed to be unique and limited.

We decided to go for an old-school look but with a modern LED enhanced twist; could we build a badge that looked like it was made entirely of wood until it was turned on?

After some experimenting with the laser cutter at the LVL1 Hackerspace we gave up on using RGB LEDs; wood absorbs too much of their light. We found some of the brightest small white LEDs we could and decided to go bigger, putting almost 200 on each badge.

The case is glued together from 6 layers of 1/16" walnut, aspen, and red cedar, alternating to produce an interleaved pattern with a burled maple front and a pale, clean grained maple for the back.

View of the layers of wood

The wooden power switch is hand-finished and made from poplar. To allow the badge to be repaired if needed, 7 friction-fit pins are also cut from the poplar.

All of the wood for the case was laser-cut, with the charred edges sanded down after being glued together using a 2x72 belt sander (and steady hands!). The rest of the finish work was done by hand using sandpaper and a collection of files in various sizes.

The front and rear panels are laser-etched to display the artwork; with some trial and error we were able to get the look we wanted.

The front has almost 200 LEDs, all placed on the PCB layout using a Python script with the placement coordinates exported in C code, allowing the firmware to know the physical position of each LED for the animations. Each LED (and indeed all the components) was soldered by hand using a Hakko FX-888D soldering iron with a medium fine tip, tweezers, and some skill.

These are driven by 8 XMEGA microcontrollers, connected by 2Mbps serial communication to a 9th master microcontroller. Since each microcontroller needs to drive up to 32 LEDs the microcontroller does not have enough hardware PWM channels; the LED dimming is done in software with PDM (pulse density modulation).

Just to add a little extra fun the data lines on the USB port go to an FTDI serial chip which then goes to a low profile DIP socket on the back of the badge. The back veneer has laser-cut holes for the pins of the DIP socket and two LEDs, which when populated with an ATMEGA328P containing an appropriate bootloader, turns the badge into an Arduino!

Each badge contains a rechargeable lipo battery that charges off the USB port.

Finally the cases were hand-finished in shellac.

These badges turned out amazing; they are beautiful to look at and when turned on they light up in various animations, some of which you can see in these videos:

*A Black Badge is a very special badge presented to members of the community in recognition of an achievement or service to the community that grants life-time access to the conference.

1 project • 0 followers
I'm a geek, an artist, a nerd, always wanting to learn more, and a unique experience.
ContactContact
Thanks to Charles "The Hat" Lehman.