USB Type C Hub Development Board for the Raspberry Pi.

USB Type C Hub Development Board for the Raspberry Pi. 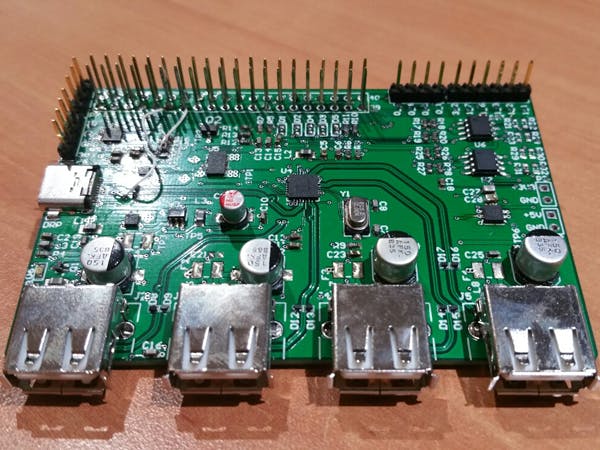 Hearing all that buzz about the new USB Type C port was quite interesting. There are many features and technologies integrated into this single port which will be on most if not all new products coming out in the near future. Cabling becomes an issue when so many different devices, power requirements and connections are needed and then we end up having a rats nest of wires.

Developing power hungry electronic devices requiring the ability to run from USB port, conventional methods were not feasible. Much research and testing led me to using the new USB Type C port which gives the ability to supply power in and have the ability to also be a host to connect with and supply power to peripherals. Many new mobile phones and laptops will be integrating USB Type C in their upcoming products. USB Type C also has superspeed data lines which were not implemented here due to the Raspberry Pi limitations.

USB Type will allow you to provide more current and charge devices faster while allowing other USB and Video communications to operate simultaneously. As there were not many products out there for the Raspberry Pi with USB Type C functionality, I have developed a small hybrid USB Type C hub which can provide speeds of up to 480Mbps and 3A of power. This development board can switch power supplies on the fly and also includes either a PSOC or Atmel microcontroller to allow analog and digital signals to be sent to the Raspberry Pi via I2C bus.

In our setup we have a Raspberry Pi Zero which only has one USB micro connector attached to the PiCHUB expanding the USB outputs to include the USB Port. We show power switching on the fly while the python code is run on the Raspberry Pi to switch the USB Type C port from device (sink) to host (source) depending on what is connected. There is also a simple interrupt driven C code on the PSOC 4000 to flash an LED every few seconds.

Here are a couple good links on setting up the I2C:

Note: if using the Raspberry Pi Zero, it must NOT be in Gadget mode otherwise the USB jumper cable will not work

At the command line, type:

This Python script should be put in the rc.local file on the Raspberry Pi so it is run upon bootup and the PiCHUB will work automatically. It can also be run from the command line if the PiCHUB is used occasionally.

Here is a link on adding the script to the rc.local file: https://www.raspberrypi.org/documentation/linux/usage/rc-local.md

At the command line type

The python code will now run silently in the background waiting for a connection on the USB Type C port.

Components that were used in this project:

3. USB Micro to USB A cable